Shared Misery and the 710 Tunnel: Screaming Molina Wants To Ruin Your Life, Too 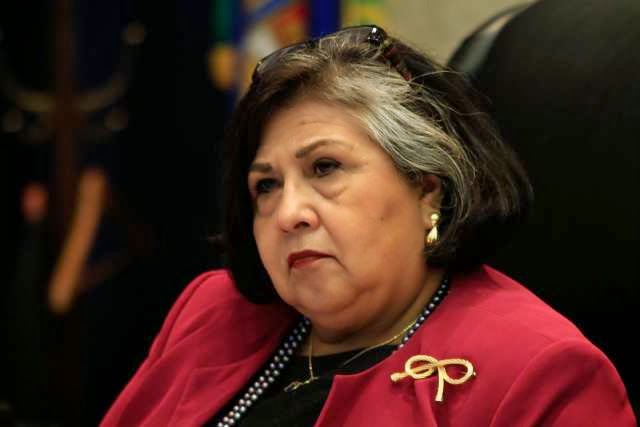 The "OP" stands for Odious Politician


(Mod: LA County Board of Supervisors petty despot Gloria Molina apparently hates your guts. So much so that she has printed the following unhinged rant in the San Gabriel Valley Tribune telling you so. You see, down south of here the air is polluted and miserable, kids get sick at alarming rates, and the traffic is horrible. So this L.A. County Supervisor think it is only fair that you get to suffer, too. That is how democracy works in one of the most corrupt counties in America. Or so suggests barmy bureaucrat Gloria. Below is one of the most over the top tirades I have ever read from an elected official. Nikita Khrushchev banging his shoe on the podium at the UN was a daisy vendor in comparison. I've also decided that I should probably add a few pithy observations. Just to set the record straight.)

(Mod: Translation - You have no rights to advocate for your interests. Everything you say is misinformation. I say so. Shut up.)

A tunnel will not cause more pollution or disrupt life for local residents. In fact, it will do the opposite.

(Mod: If you Google "Molina + Green" you will get to read dozens of pages of her mouthing bromides about the environment. Reality dictates that pumping hundreds of thousands of vehicles into the San Gabriel Valley daily, many of them diesel burning trucks, will destroy our environment and bring the 210 to a halt. Despite Screaming Molina's assurances. Like most LA pols, the only green Molina understands is cash.)

Currently, with the 710 gap, drivers of roughly 200,000 vehicles have no choice but to use major traffic arteries in place of a completed freeway — along Valley Boulevard, Fremont Avenue, Fair Oaks Avenue, Arroyo Parkway and Sierra Madre Boulevard. This is exactly why the 710 Freeway practically grinds to a halt during rush hour well before drivers reach the Valley Boulevard exit.

(Mod: If traveling up the 710 and onto the 210 is made more convenient by building a tunnel, that 200,000 figure will likely double. How this makes anything better for anybody, even in Alhambra where nothing ever seems to improve, is beyond me.)

So, for any commuter using the 710 Freeway, the gap already disrupts life in Alhambra and Southeast Los Angeles. Local roads in these neighborhoods already suffer severe damage due to overuse.

(Mod: So ruining our lives as well will make things better how? Overusing the 210 is better? How? Is that all Screaming Molina has to offer to us? Is this what life has all come down to here? Shared misery?)

These residents were promised decades ago that this fix was a stop-gap measure. Opponents need to quit trying to stop the gap from being closed.

(Mod: And what were we promised? That we would have a choice in this matter? Or that we should be allowed to protect our children and elderly from the effects of all that bad air and congestion? Is this all the LA County Board of Supervisors can come up with?)

These same naysayers also erroneously claim that a tunnel will worsen air quality. They conveniently ignore how air quality is already horrendous in Southeast L.A. — especially for its children, where 12 out of every 100 children develop asthma.

(Mod: Great. So now 12 out of every hundred children in the San Gabriel Valley will have the right to develop asthma as well. And Molina makes this threat just a few lines after saying the 710 tunnel won't make things worse, and improve the air. Quite a dramatic mood swing.)

There is a direct connection between asthma in Southeast L.A. and the pollution caused by cars and trucks forced to stand idle along an incomplete 710 Freeway. It’s all the more true since commuters must use the streets as de facto “street ways.”

(Mod: Great. The Queen of Asthma has spoken. Asthma for everyone. Democracy in L.A. County has now come down to sharing diseases.)

The pollution that 710 tunnel opponents don’t want is already in the air, being breathed by Southeast L.A. families — who don’t have the extra time and resources to devote to NIMBYism.

(Mod: Ah yes, name calling. It usually comes down to that. Defend your rights, stand up for your children, stand up for your seniors, or even yourself, and you are a NIMBY. Of course, a complimentary acronym to NIMBY could be BIMBY. Build It in Molina's Back Yard. Which would then turn her into a NIMBY. Tout suite.)

A tunnel will include massive air filtration systems. The air emitted from these vents will be much cleaner — and strictly monitored — unlike current emissions from the nearby street ways.

(Mod: You mean the technology to clear all of that asthma causing pollution already exists, and Gloria hasn't put it into use for all of those afflicted people in Southeast L.A. County? If I lived in S.E. Los Angeles County I'd be getting recall petitions ready right about NOW.)

(Mod: Dumping 200,000 to 400,000 more vehicles from the 710 Cancer Corridor and into the San Gabriel Valley will do no such thing. Talk about misinformation. This is just a flat-out and rather stupid lie.)

(Mod: I'd hate to think what Gloria pulled that figure out of. Dumping even more traffic onto the already packed 210 Freeway is not winning any popularity contests in my neighborhood. Increasing child asthma rates to 12% is not very popular, either.)

Numerous school districts, elected officials, labor groups, and business associations from these areas all agree that we can’t wait any more for a long overdue solution to this problem. Even Pasadena residents voted in favor of closing the 710 gap!

(Mod: I have no doubt that Screaming Molina can line up all the hack politicians, bumbling Metro bureaucrats, consultants, PR flacks, union pols, "interested" businesses and over-salaried government loafers she wants. It is what makes the kind of corrupt government she represents possible.)

Moreover, the residents of L.A. County have spoken. An overwhelming majority of county voters approved Measure R with the SR-710 North Tunnel as a named project.

(Mod: 2008's Measure R might have passed, but the effort to extend it - Measure J - was defeated. And a lot of the votes that sent this regressive tax extension down the tubes came from right here in the SGV. Oh, and Measure R money is being used for the 710 Tunnel after all? Interesting. That is not what we'd been told.)

A tunnel will reduce both arterial and freeway congestion by 20 percent. It will remove more than 75,000 daily trips from local streets and reduce regional cut-through traffic. Plus it will eliminate congestion at 22 percent of the intersections studied.

(Mod: The phrase "If you build it they will come" comes into play here. If you make it easier to travel from the 710 Cancer Corridor and into the San Gabriel Valley, the traffic will be there. You notice how Screaming Molina never mentions the 605 Freeway? Or the 110 Freeway? That is because a lot of that traffic will then switch to the 710. Pumping huge amounts of additional car and diesel truck traffic onto the 210 Freeway. And way far beyond that 200,000 figure Molina is barking about.

Fear mongers claim truck traffic from the ports into the San Gabriel Valley will increase if we close the 710 gap. They conveniently ignore that nearby corridors are currently being improved to accommodate existing and future heavy truck port traffic. And the tunnel approval can be conditioned to restrict trucks of certain size and weight.

(Mod: Improved where? Earlier Screaming Molina claimed that these problems have been going on for decades? Now they are getting better? Where? So maybe we won't need the 710 Tunnel after all?)

When the 405 Freeway was constructed through Beverly Hills and Brentwood, residents voiced similar complaints. But could you imagine the Westside without the kind of connectivity that the 405 Freeway provides — with Sepulveda Boulevard as your only commuting option?

(Mod: As anyone in touch with popular reality can tell you, the 405 is a hideous nightmare. A June 2012 article in the L.A. Daily News, "It's official! 405 is nation's worst: Route into Valley is most congested in the U.S." (link), clearly spells this out. We do not need that here.)

This is what San Gabriel Valley residents — especially in El Sereno and Alhambra — have dealt with every day, for decades.

(Mod: Great. And that is what we apparently must now begin too suffer as well. You know, because it is fair. This woman loves to make threats.)

Traffic congestion in the San Gabriel Valley is quickly rivaling the Westside. And because of the 710 Freeway intimidation campaign, help — like commuters in traffic — is stuck.

(Mod: Can anyone make any sense of this sentence? Not dumping 200,000 to 400,000 vehicles onto the 210 is making things more congested here? And I thought the Westside's 405 made things better. Apparently logical progression in written communication is well beyond the abilities of OP Molina.)

And if opponents have their way, this will never change. They’ve opposed every option before them — a freeway above ground, below ground and at street level.

(Mod: Great! Not making things worse is a good thing. I am all in favor of that.)

The only option acceptable to the local “Party of No” is the status quo. I’d stand with them if the proposal was the one presented in the 1970s — homes seized and razed for yet another freeway.

(Mod: I would never want you to stand with me on anything, Gloria. Ever. It would be far better that you just get kicked out of office.)

But that is not the case today.

(Mod: No, today you are making threats and working to destroy the lives and environment of the SGV as well. Just because life is miserable where you come from, and you are apparently incapable of doing anything about it, is no excuse to do the same here. Try standing with the people you are supposed to represent. The ones with 12% child asthma rates. Shared misery is good for nobody.)

We will not fall prey to misinformation and intimidation. The facts are clear — a tunnel will reduce pollution and improve mobility.

(Mod: Utter nonsense. The 710 Tunnel is to pay off foreign investors, placate the slave labor nations that lend the incompetent nitwits in Washington DC trillions of dollars, and pump import products more cheaply into the heartland of America. Further destroying good American jobs and what is left of our industrial capacity. In other words, it is all about money. The only thing the corrupt pols currently destroying L.A. County really understand, or care about. And they apparently don't give a damn where it comes from, or whose interests it furthers.)

Let’s stand up for what is right. Close the gap. Build the 710 Freeway tunnel.

(Mod: Let's help the voters dump Screaming Molina instead. It would be far better for the air, the children, and the ears.)