The End of Snow? 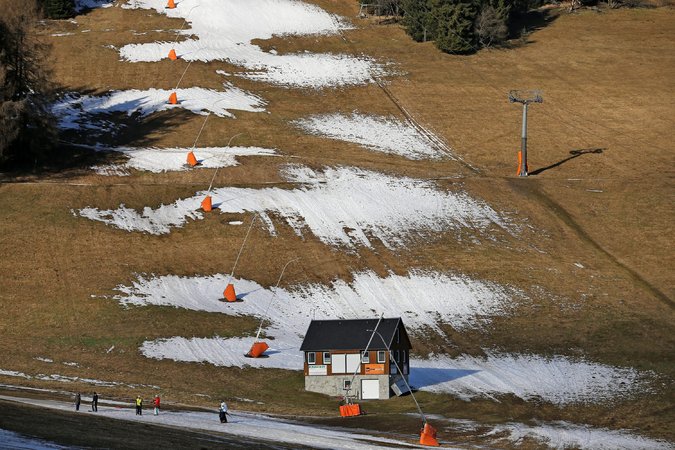 OVER the next two weeks, hundreds of millions of people will watch Americans like Ted Ligety and Mikaela Shiffrin ski for gold on the downhill alpine course. Television crews will pan across epic vistas of the rugged Caucasus Mountains, draped with brilliant white ski slopes. What viewers might not see is the 16 million cubic feet of snow that was stored under insulated blankets last year to make sure those slopes remained white, or the hundreds of snow-making guns that have been running around the clock to keep them that way.

Officials canceled two Olympic test events last February in Sochi after several days of temperatures above 60 degrees Fahrenheit and a lack of snowfall had left ski trails bare and brown in spots. That situation led the climatologist Daniel Scott, a professor of global change and tourism at the University of Waterloo in Ontario, to analyze potential venues for future Winter Games. His thought was that with a rise in the average global temperature of more than 7 degrees Fahrenheit possible by 2100, there might not be that many snowy regions left in which to hold the Games. He concluded that of the 19 cities that have hosted the Winter Olympics, as few as 10 might be cold enough by midcentury to host them again. By 2100, that number shrinks to 6.

The planet has warmed 1.4 degrees Fahrenheit since the 1800s, and as a result, snow is melting. In the last 47 years, a million square miles of spring snow cover has disappeared from the Northern Hemisphere. Europe has lost half of its Alpine glacial ice since the 1850s, and if climate change is not reined in, two-thirds of European ski resorts will be likely to close by 2100.

The same could happen in the United States, where in the Northeast, more than half of the 103 ski resorts may no longer be viable in 30 years because of warmer winters. As far for the Western part of the country, it will lose an estimated 25 to 100 percent of its snowpack by 2100 if greenhouse gas emissions are not curtailed — reducing the snowpack in Park City, Utah, to zero and relegating skiing to the top quarter of Ajax Mountain in Aspen.

The facts are straightforward: The planet is getting hotter. Snow melts above 32 degrees Fahrenheit. The Alps are warming two to three times faster than the worldwide average, possibly because of global circulation patterns. Since 1970, the rate of winter warming per decade in the United States has been triple the rate of the previous 75 years, with the strongest trends in the Northern regions of the country. Nine of the 10 hottest years on record have occurred since 2000, and this winter is already looking to be one of the driest on record — with California at just 12 percent of its average snowpack in January, and the Pacific Northwest at around 50 percent.

To a skier, snowboarder or anyone who has spent time in the mountains, the idea of brown peaks in midwinter is surreal. Poets write of the grace and beauty by which snowflakes descend and transform a landscape. Powder hounds follow the 100-odd storms that track across the United States every winter, then drive for hours to float down a mountainside in the waist-deep “cold smoke” that the storms leave behind.

The snow I learned to ski on in northern Maine was more blue than white, and usually spewed from snow-making guns instead of the sky. I didn’t like skiing at first. It was cold. And uncomfortable.


Then, when I was 12, the mystical confluence of vectors that constitute a ski turn aligned, and I was hooked. I scrubbed toilets at my father’s boatyard on Mount Desert Island in high school so I could afford a ski pass and sold season passes in college at Mad River Glen in Vermont to get a free pass for myself. After graduating, I moved to Jackson Hole, Wyo., for the skiing. Four years later, Powder magazine hired me, and I’ve been an editor there ever since.

My bosses were generous enough to send me to five continents over the last 15 years, with skis in tow. I’ve skied the lightest snow on earth on the northern Japanese island of Hokkaido, where icy fronts spin off the Siberian plains and dump 10 feet of powder in a matter of days. In the high peaks of Bulgaria and Morocco, I slid through snow stained pink by grains of Saharan sand that the crystals formed around.

In Baja, Mexico, I skied a sliver of hardpack snow at 10,000 feet on Picacho del Diablo, sandwiched between the Sea of Cortez and the Pacific Ocean. A few years later, a crew of skiers and I journeyed to the whipsaw Taurus Mountains in southern Turkey to ski steep couloirs alongside caves where troglodytes lived thousands of years ago.

At every range I traveled to, I noticed a brotherhood among mountain folk: Say you’re headed into the hills, and the doors open. So it has been a surprise to see the winter sports community, as one of the first populations to witness effects of climate change in its own backyard, not reacting more vigorously and swiftly to reverse the fate we are writing for ourselves.

It’s easy to blame the big oil companies and the billions of dollars they spend on influencing the media and popular opinion. But the real reason is a lack of knowledge. I know, because I, too, was ignorant until I began researching the issue for a book on the future of snow.

I was floored by how much snow had already disappeared from the planet, not to mention how much was predicted to melt in my lifetime. The ski season in parts of British Columbia is four to five weeks shorter than it was 50 years ago, and in eastern Canada, the season is predicted to drop to less than two months by midcentury. At Lake Tahoe, spring now arrives two and a half weeks earlier, and some computer models predict that the Pacific Northwest will receive 40 to 70 percent less snow by 2050. If greenhouse gas emissions continue to rise — they grew 41 percent between 1990 and 2008 — then snowfall, winter and skiing will no longer exist as we know them by the end of the century.

The effect on the ski industry has already been significant. Between 1999 and 2010, low snowfall years cost the industry $1 billion and up to 27,000 jobs. Oregon took the biggest hit out West, with 31 percent fewer skier visits during low snow years. Next was Washington at 28 percent, Utah at 14 percent and Colorado at 7.7 percent.

The winter sports industry contributes $66 billion annually to the nation’s economy, and supports more than 960,000 jobs across 38 states, according to the Outdoor Industry Association. A surprisingly large sector of the United States economy appears to be teetering on the brink.

Much of these environmental data come from a 2012 report, “Climate Impacts on the Winter Tourism Economy in the United States,” by two University of New Hampshire researchers, Elizabeth Burakowski and Matthew Magnusson. The paper was commissioned by the Natural Resources Defense Council and a start-up advocacy group called Protect Our Winters. The professional snowboarder Jeremy Jones started that group, known as POW, in 2007 when he realized that many of the slopes he had once ridden no longer held snow. It has since become the leading voice for those fighting to save winter, largely because few others are doing anything about it.

The National Ski Area Association has reacted with relatively ineffective campaigns like Sustainable Slopes and the Climate Challenge, while policies at ski resorts range from aggressively green to indifferent. Somewhere in between lie the majority of American ski areas, which are struggling to make ends meet while pushing recycling, car-pooling, carbon offsets and awareness campaigns to show they care.

The truth is, it is too late for all of that. Greening the ski industry is commendable, but it isn’t nearly enough. Nothing besides a national policy shift on how we create and consume energy will keep our mountains white in the winter — and slow global warming to a safe level.

This is no longer a scientific debate. It is scientific fact. The greatest fear of most climate scientists is continued complacency that leads to a series of natural climatic feedbacks — like the melting of the methane-rich permafrost of Arctic Canada.

Artificial snow-making now helps to cover 88 percent of American ski resorts, and has become the stopgap measure to defend against the early effects of climate change. Snow-making requires a tremendous amount of electricity and water, though, so it’s unlikely that snow guns will be our savior. In the Alps, snow-making uses more water in the winter than the entire city of Vienna, about 500,000 gallons of water per acre. Ski areas like Vail, Keystone, Breckenridge and Arapahoe Basin seed clouds with silver iodide to make it snow, but that won’t help much when it gets warmer. When it does, whatever the clouds bring will fall as rain.
With several dry winters back to back, the ski industry is waking up. Last spring, 108 ski resorts, along with 40 major companies, signed the Climate Declaration, urging federal policy makers to take action on climate change. A few weeks later, President Obama announced his Climate Action Plan, stating, “Mountain communities worry about what smaller snowpacks will mean for tourism — and then, families at the bottom of the mountains wonder what it will mean for their drinking water.”
It was a big step forward for skiers and the country. And it led people to ask me, “Why save skiing when there are more pressing consequences of climate change to worry about?” The answer is, this is not about skiing. It is about snow, a vital component of earth’s climate system and water cycle. When it disappears, what follows is a dangerous chain reaction of catastrophes like forest fires, drought, mountain pine beetle infestation, degraded river habitat, loss of hydroelectric power, dried-up aquifers and shifting weather patterns. Not to mention that more than a billion people around the world — including about 70 million in the western United States — rely on snowmelt for their fresh water supply.
I remember watching my first Winter Olympics in 1980. We were on a family ski trip at Copper Mountain in Colorado, where my brother and I skied the first powder run of our lives. It was on a gentle slope just off one of the main trails. We wiggled down the hill in chaotic rapture then skied the run again and again. The snow was soft and the turns effortless. You don’t have to be a skier to feel nostalgia for those whitewashed days — or to see the writing on the wall.
Newer Post Older Post Home