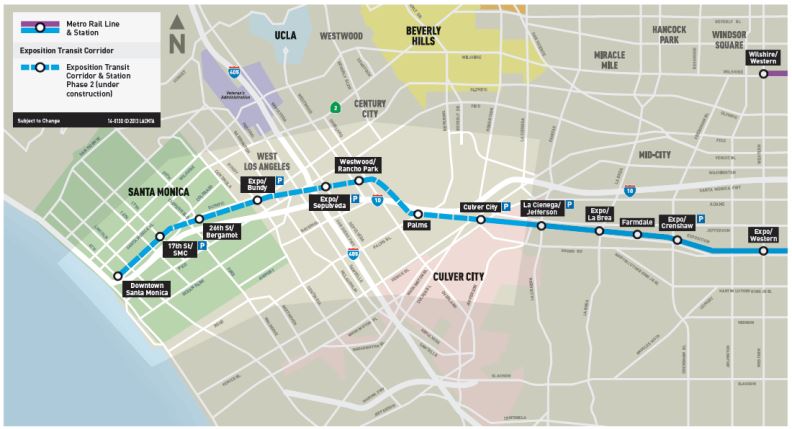 Big Blue Bus (BBB) has just begun the gargantuan process of figuring out how to best integrate its system with the Metro Expo Line Phase 2, set to open in early 2016. Three of the seven new stations being built are within the City of Santa Monica, but all are within BBB’s service area. The end of the line will be at Colorado Avenue and 4th Street, just a few blocks from the beach. The line connects to Downtown Los Angeles via Culver City, ending at Metro Center, 7th St. and Figueroa St.

Most of the future stations already have some overlap with existing bus routes, including four routes that already serve the current end of the line in Culver City at Venice and Robertson Boulevards. BBB is embarking on this Expo Integration Study to decide how to best serve its new and existing riders given its current budget and resources.

Last week, it held three community meetings at which consulting firm Nelson\Nygaard presented the current system and some of the questions it and BBB are trying to answer with the study. What the agency was looking for at the meetings—and is still looking for at the beginning of the process—is public comment. What people say now will help inform the direction of the planning moving forward.

In other words, the first step is to hear from the riders before they start working on updating its routes.

The project’s manager at Nelson\Nygaard, Thomas Whittmann, called Expo a “game changer,” because it will provide BBB riders with “fast, frequent service access to destinations throughout the region.” BBB already connects with L.A. Metro service, but Expo advertises 46-minute commutes from downtown L.A. to Santa Monica upon completion of Phase 2. Not only that, but existing Metro train lines serve places including the San Fernando Valley, Universal Studios, LAX, Hollywood, and many other city attractions. They also provide connections to commuter trains like Metrolink and nationwide train service like Amtrak.

Attendance at the meetings was light (about 40 people total at all three), but there is still plenty of opportunity get involved. BBB will soon release an online survey on its study website that will include multiple-choice and write-in questions, as well as a “create your own transit system” game. The results of the survey and preferences gathered at this stage will be incorporated into a plan, or a few options for a plan, that the agency will present in July. At this point the public will again have an opportunity to voice its opinion on the service. BBB projects that the changes identified in the study will be implemented by late 2015, as soon as Phase 2 is ready to open.

“This is like putting pieces of a puzzle together,” said the project’s manager at Nelson\Nygaard, Thomas Whittmann. “Big Blue Bus won’t have more budget to run shuttle buses to every Expo Line station. But when we’re making changes to the bus routes we’re messing with people’s lives. We need to understand what people want.”

Some of the questions BBB is looking at answering in these early days include, should it create any new lines? Should it truncate any lines at Expo stations or reroute nearby lines to connect? How should it accommodate buses, bus stops, and riders at Expo stations? How can it best continue to serve popular destinations like downtown Santa Monica and UCLA? Should it serve any new areas like Playa Vista? Should it expand hours or increase frequencies on popular routes? In short, how can it best “extend the reach” of Expo and Metro Rail?

At one of the meetings, Whittmann asked the audience what its vision for transit looked like. One community member said she envisioned walking to the end of her block, taking a blue bus to whichever Expo Line station was safest and most convenient to her needs, then using Expo to go wherever she needed to go. She wanted the bigger link to Expo—but she also did not want to lose the ability to take a blue bus for her local trips either.

“We want to leverage Expo as a primary resource, but we need to be thinking about the local needs and people too,” said BBB’s Chief Operations Officer Patrick Campbell. “This is about how to leverage a major resource with the reasonable constraints we have.” 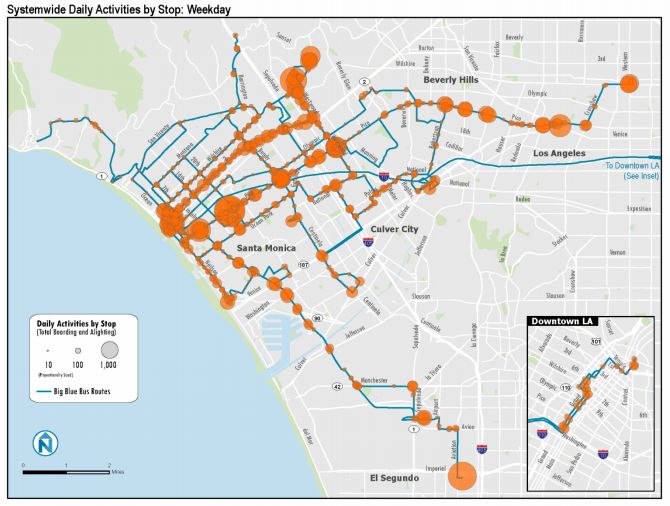 There are some constraints to the study. For example, the number of buses it runs and its budget, which will probably not change much. As a public agency, BBB also has a responsibility to try to serve riders who have few other transportation options. It typically uses measures like land use, population density, employment density, and household income to estimate transit demand.

As for how to integrate with Expo, BBB already has a few ideas. Whittmann said the agency is already thinking about how to connect big Santa Monica destinations such as Santa Monica City College, Saint John’s Health Center, and the Santa Monica-UCLA Medical Center and Orthopedic Hospital with the Bergamot Station at Olympic and 26th St.

The agency is also already taking steps to streamline the fare process with an “Azul” smart card that is linked to an online web portal where users will be able to add value or passes to their card. BBB is planning to add ten ticket vending machines at big connection points in its service area, Campbell said.

It has already made a couple changes to its transfer policy in recent months, including offering special transfer TAP cards for riders transferring to Metro Rail at the Green Line Aviation Station. At the beginning of the year, it eliminated transfers to other BBB lines to help expedite boarding times.

Campbell said its fareboxes will be compatible with the TAP cards used with L.A. Metro buses and trains and several other transit agencies in the area, including Culver CityBus, Santa Clarita Transit, and LADOT. Once TAP finishes working with Long Beach Transit, it will start adding BBB into its system. He expects TAP-compatible fareboxes to be up and running by early summer.