University of Minnesota professor David Levinson has written in the past that, because of the relative completeness of our national highway network and the cost of construction, the return on investment for additional mileage is approaching zero. One study estimates the return on investment for highway construction was just 14% between 1990 and 2000.

I recently decided to follow up on this line of research, so I dug through some Census data. What I found was shocking, though not altogether surprising. It seems that, besides wasting billions of taxpayer dollars, road-building may actually be holding back economic growth overall: from roughly 2000 to 2010, states that built the fewest urban road miles grew an average of 64 to 94 percent faster than their asphalt-enamored neighbors. Rather than increasing productivity through increased mobility and reduced congestion, as politicians and lobbyists so often promise, all this mindless road-building could be depressing statewide economic growth! 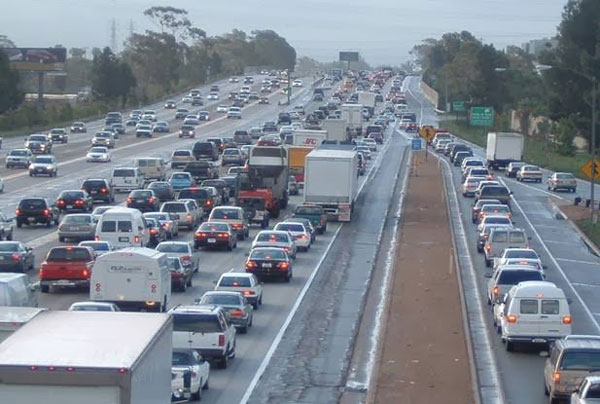 The statistics at the state level vary widely for both road-building and income growth:
Looking at the numbers in aggregate, we see some interesting trends that seem to hold up just about any way you slice the pie:
Statistically, analyzing the correlation between road-building and economic growth gives us an r-score (correlation coefficient) of -0.34, which implies that about 10% of a given state's economic growth can be explained by how much urban road-building they did over this time period. Many things influence the overall health of any economy, obviously, so we shouldn't expect the quantity of roads to wholly predict statewide economic growth by itself, but this does indicate a negative correlation between the two variables: more roads equals less growth. (As always, please remember that correlation does not imply causation.)

Here's a graph of road-building versus economic growth, complete with the down-sloping trend line: 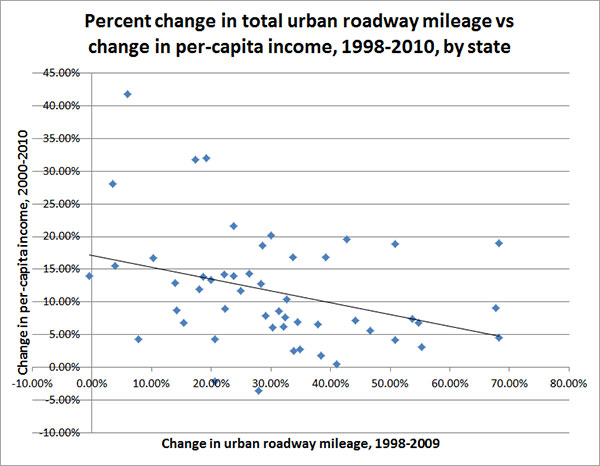 None of this should be particularly surprising. While politicians and advocates love to tout the job-creating value of new road and highway capacity, congestion reduction rarely lasts more than five years and widened roads ultimately only succeed in extending the boundaries of wasteful, unproductive sprawl. In the case of road widenings, it's entirely possible that the disruption caused during the construction phase completely erases — or even exceeds — the fleeting benefits of reduced congestion.

Then there's the opportunity cost: think of all the good that could have been done with the hundreds of billions of dollars spent on roadways over that period: more responsible transportation spending, education, renewable energy ... take your pick.
Washington, DC, which grew its urban road network by just 5.91% over this 11-year period but managed a best-in-class 41.78% growth rate, doesn't have to imagine.