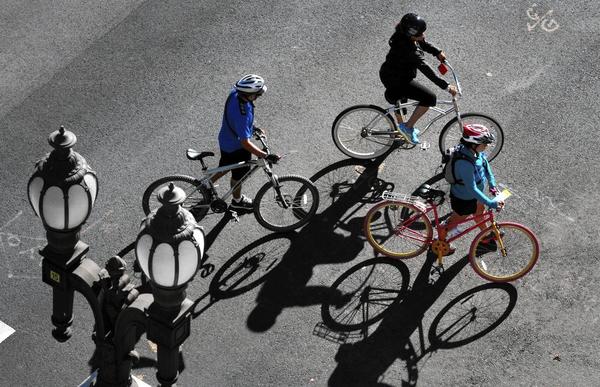 Bicycle riders gather to begin their ride at 1st and Spring streets in downtown Los Angeles in a CicLAvia event. A Caltrans study finds that Californians are using their cars less.


Californians aren't depending quite as heavily on cars for commutes and errands as they did a decade ago, according to a new survey by Caltrans.


Although driving is still by far the most dominant mode of transportation across the state, accounting for about three-quarters of daily trips, researchers say a decrease in car usage and a rise in walking, biking and taking transit indicate that Californians' daily habits could be slowly changing.

What is happening in California mirrors a nationwide decline in driving, experts say: The number of car miles driven annually peaked about a decade ago, and the percentage of people in their teens, 20s and 30s without driver's licenses continues to grow.

It is "a shift with real benefits for public health that also cuts greenhouse gases and smog-forming pollution," Mary Nichols, chairman of the California Air Resources Board, said in a prepared statement.

From 2010 to 2012, researchers working for the California Department of Transportation asked about 110,000 people in more than 42,000 households to record the duration and distance of every trip they took during a random day, including running errands, going out to eat, and commuting to work or school.

The average car trip in California was about 5.6 miles and took a little more than 18 minutes.

Daily trips on bicycles increased from 0.8% to 1.5% compared with the decade before, the data said, and the average trip spanned 1.5 miles and 18 minutes.

The average commuter rail trip, including data from Los Angeles County residents who rode the Metro Red and Purple Lines, was just under 10 miles and took nearly 24 minutes.
Nearly 8% of residents surveyed did not own a car. Statewide, households owned an average of 1.8 vehicles.

Although the decrease in driving and uptick in other forms of transportation seems promising, the study suggests an overall drop in the number of trips that could be cause for concern, said Brian Taylor, the director of the UCLA Institute of Transportation Studies.

"It's not better for society if we reduce auto travel by having people who are stuck home and can't afford to get out," Taylor said.

He said transportation planners aim to shift people from cars to other modes of transit without reducing the total number of trips. Typically, seeing more trips means more people are working and have money to spend on errands and entertainment.

Taylor said vehicle trips should tick back up slightly in coming years if the economy continues to recover and if some of the 3.7% of Californians who are long-term unemployed find work again.
One-quarter of survey respondents did not have anyone working in the household. Of those who weren't working, nearly four in 10 were retired and about 15% were unemployed.