Chinese start-up Build Your Dreams violated federal rules and should not have been allowed to bid on delivering an electric-bus fleet to Long Beach Transit, officials say. 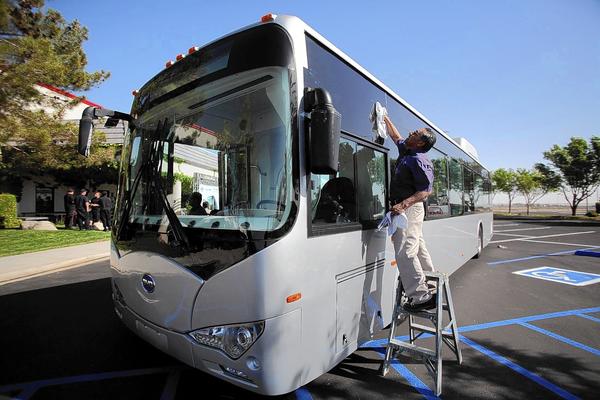 Chinese company Build Your Dreams failed to submit its goals for working with small businesses owned by minority or other disadvantaged groups before bidding. Above, a bus from the company is cared for by Joaquin Clara Lopez in Lancaster, where the firm has built a manufacturing plant.

Chinese automaker Build Your Dreams is close to losing a $12-million contract to deliver a fleet of electric buses to Long Beach Transit, a deal the company hoped would jump-start its U.S. operations.


Federal transit officials said that BYD violated some regulations that made it ineligible to bid in the first place. Both sides are in talks to determine how to best exit the contract ahead of what is expected to be a new round of bidding.

It would mark a big setback for the Chinese company, which outbid four rivals last spring to build 10 electrically powered buses for Long Beach. It was the first contract BYD won since building a bus manufacturing factory in Lancaster last year.

"This is certainly a damper for the company and its hopes that they will become a bigger force in the U.S.," said Thilo Koslowski, an analyst at research firm Gartner Inc. "For a company in start-up mode … that's a big thing to take in."

The Federal Transit Administration decided that BYD was not eligible to compete for the contract because it violated agency regulations on federally funded projects, according to letters sent by the agency to Long Beach Transit.

BYD failed to submit its goals for working with small businesses owned by minority or other disadvantaged groups before bidding, the letters said. That violated rules under the Disadvantaged Business Enterprise program, designed to give small businesses a chance to compete fairly on federally funded projects.

The company submitted the paperwork in June, but by then it was too late. As a result, the transit administration threatened to withdraw millions in funding to Long Beach Transit.

Long Beach Transit now has two options: Cancel the contract with BYD and open a second round of bidding, or find more money to buy the buses.

BYD has appealed to the secretary of Transportation to overrule the agency's decision, said Lanny Davis, a BYD attorney. But the company is in negotiations with Long Beach for "an amicable resolution" in case the contract must be terminated and a new round of bidding begins.

Davis described the original error as "a good-faith mistake." An executive at the company believed the paperwork could be submitted after the contract was won rather than before the bidding took place, he said.

BYD can compete for the contract again if the original is terminated by Long Beach Transit, Davis said. "We are confident that there will be no significant adverse effects," he said.
Long Beach Transit has given BYD time to find a solution, transit spokesman Kevin Lee said. He declined to comment further.

The Shenzhen, China, company has also won contracts to build two buses for the Antelope Valley Transit Authority and as many as 25 for the Los Angeles County Metropolitan Transportation Authority. It has about 50 employees in the Southland at its downtown headquarters and the Lancaster facility.

BYD has had its share of problems in the last year.

The company was the subject of an investigation by the state's Department of Industrial Relations into its workplace practices. In October, investigators raided BYD's headquarters and its bus factory.
The labor agency later fined the company for violating California labor laws, and labor activists protested outside its offices.

In January, state labor regulators withdrew minimum wage citations against the company after BYD officials showed that workers who were allegedly paid less than minimum wage were actually paid more than the California minimum.