Jumps in use of car-sharing and bike-sharing services 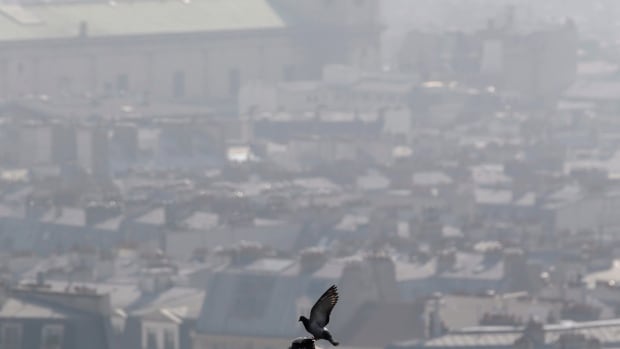 A pigeon is perched at the Saint Vincent de Paul church as smog cloaks Paris.


Air pollution in Paris has hit health-threatening levels over 80 per cent higher than in London and Berlin as a sunny spell reaches western Europe, prompting the city to curb road speeds and offer free public transport.

Charges were also waived for the city's pioneering cycle and electric car-sharing schemes this week as a visible haze hung over the streets of the French capital.
European Environment Agency (EEA) figures for Thursday showed there was 147 microgrammes of particulate matter (PM) per cubic metre of air in Paris compared with 114 in Brussels, 104 in Amsterdam, 81 in Berlin and 79.7 in London.

Background pollution — the outdoor air quality experienced by the average citizen — topped the 100 maximum measurable index level in Paris on Thursday, data from pollution watchdog airqualitynow.eu showed, making the French capital the only European capital in the "very high" level zone. The index stood at 81 in London, 76 in Berlin and 61 in Madrid. 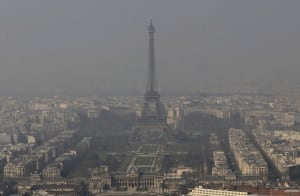 Bike-sharing services, buses, underground trains and other forms of transport will remain free over the weekend.

Paris is traditionally more susceptible to poor air quality than other main western European capitals, with only Athens scoring worse according to World Health Organization (WHO) annual averages collected in 2008.

Fiscal support for diesel over gasoline in motor vehicles and heavy private vehicle traffic have been cited as causes.

The near-absence of wind and temperatures about 10 degrees Celsius above seasonal averages were also a factor this time, according to Meteo France data.

EU environment officials noted that pollution hot spots elsewhere in the world are far worse.
"While the current levels in Europe do pose a significant risk to health, peak levels can be up to 4-5 times higher in Asian cities like Beijing," an EEA spokesman told Reuters.

"Nevertheless, the levels of PM pollution encountered in the currently affected European regions would also be classified as pollution episodes in Asian cities," he said.
Three environmental groups worried over the recurring spikes in French air pollution this week filed a lawsuit "against x" - where the person or body deemed responsible is difficult to ascertain - for "endangering the lives of others."

"We know pollution causes deaths. Emergency departments are full of people with breathing problems, that's why we decided to file a complaint," said Nadir Saifi, a member of Ecology Without Borders, one of the groups filing the suit.

City of Paris officials argue the situation would be much worse had the government not introduced the popular bike- and car-sharing schemes now being replicated in cities such as London.
The use of Autolib cars had jumped by 46 per cent on Thursday compared to the week before, Paris transport councillor Julien Bargeton said, while Velib cycle use had risen by 72 per cent.
Charges for these services and buses, underground trains and other forms of transport will remain free over the weekend.

Speed limits were also reduced by 20 kilometres an hour and authorities in the Ile-de-France region around Paris took all but the most essential public vehicles off the roads.

Warnings from authorities to avoid physical exertions did not deter Parisians from enjoying the warm weather, however.

"My lungs are already polluted by cigarettes, so I don't really care," Sophie Boisseau, 29, told Reuters at the terrace of the Biscornu cafe near the stock exchange in central Paris.