Penny-pinching in the toll lanes

Metro ExpressLanes collects on bills of 10 cents and 45 cents. It should waive charges any time collection efforts cost more than the cash collected. 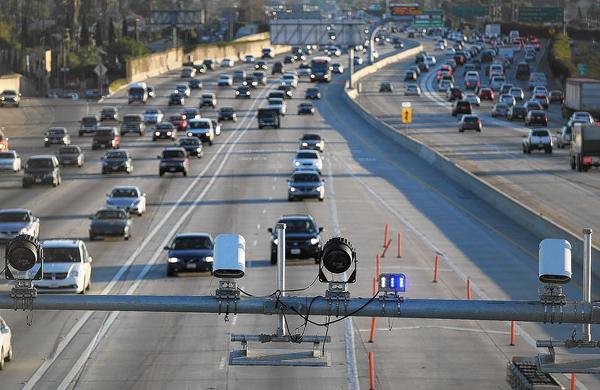 A Metro ExpressLanes spokeswoman said there’s value to her agency in spending more than the amount of an unpaid toll to collect it: engaging with the public. Above, the express lane south of the Slauson Avenue transit station on the 110 Freeway.

How much should public entities spend trying to collect a charge that runs only a few cents?


Lawmakers might want to sit up and take note. Maybe, just maybe, it would make sense to waive charges any time collection of cash costs more than the amount of cash being collected.

Bruce and Pat West were driving recently on the 110 Freeway near the Los Angeles Memorial Coliseum. They merged into the express lane, for which they didn't have a FasTrak transponder in their car to pay the requisite toll.

"I told my husband that I didn't think we were supposed to be there," Pat West recalled. "So we got out of the lane. We couldn't have been in there longer than 30 seconds."

But that was long enough for the penny-pinching folks at Metro ExpressLanes.

A couple of weeks after their lane-changing error, the Wests received a Notice of Toll Evasion Violation.

A few days later, the Wests received a second Notice of Toll Evasion Violation for the same incident but indicating it was for having been a little farther down the freeway. The charge for this one was 45 cents.

Mailing each notice cost Metro 38 cents in postage, plus processing, paper, printing and handling. It's fair to assume that the transit agency spent at least $1 collecting a grand total of 55 cents in fines.
"In the huge pantheon of things, this isn't a big deal," said West, 66, of Huntington Beach. "But it seems like a microcosm of corporate inefficiency."

It does. And when you spread such inefficiency among potentially millions of Southern Californians, you can see how it's entirely possible that such relatively minor losses can add up to huge deficits.
Metro makes paying nickel-and-dime charges as troublesome as it can. "Do not send cash," its notices say, thus eliminating the possibility of dropping a coin or two into an envelope.

Instead, you have to write a check for a few cents or put it on plastic, which would raise Metro's costs even higher once Visa or MasterCard tacks on its own charges.

Kathleen McCune, director of Metro ExpressLanes, told me it was just a fluke the Wests received two toll-evasion notices. The timing of their express-lane trespass fell between two Metro billing periods, she explained, so that resulted in two notices being issued.

As for chasing after penny-ante amounts, McCune said this is because of a policy of charging people only for the unpaid toll. A $25 fine is tacked on only if the toll remains unpaid for two weeks.

And if Metro has its way, McCune said, the agency soon won't wait to add that $25. It hopes to eliminate the two-week grace period by this summer, which would be a kick in the teeth for anyone who, like the Wests, strays momentarily into an express lane.

In any case, McCune said, there's value in spending twice as much as the value of an unpaid toll to engage with members of the public.

All things considered, a newspaper ad or billboard might be more cost-effective.

I figure it like this: Private companies are entitled to behave as stupidly as their shareholders will allow. So if they want to lose money on a transaction, that's their business.