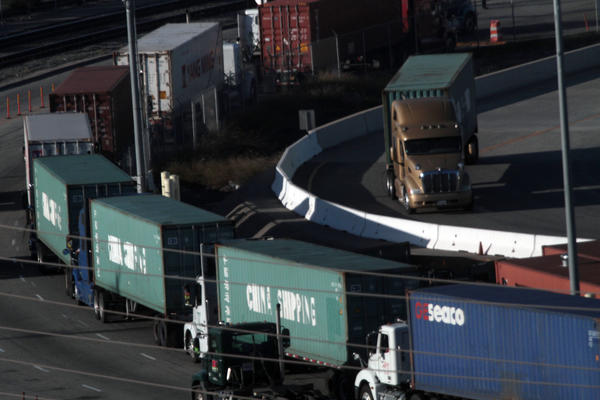 Truck drivers say they need union representation to improve pay and working conditions for the thousands who transport cargo out of the ports of Los Angeles and Long Beach.

A string of actions by state officials and the National Labor Relations Board has strengthened the hand of truck drivers who say they need union representation to improve pay and working conditions for the thousands who transport cargo out of the ports of Los Angeles and Long Beach.


In a settlement this week, one major trucking company agreed to post notices acknowledging the workers’ right to organize — not previously a given because drivers were treated as contract workers, who are not subject to unionization. The agreement comes after repeated victories at the state Labor Commissioner’s office, where 30 drivers have won decisions against 11 port trucking firms, awarding them $3.6 million in wages and penalties.

“I am ecstatic. They dug into this situation and found there is a serious problem here,” said Eric Tate, chief of Teamsters Local 848, which covers the harbor area. “We are trying to protect jobs and workers who are being mistreated.”

A spokesman for Pacific 9 Transportation, the company that agreed to settle a dispute with the Teamsters, downplayed the action. Alex Cherin noted that the Carson-based company had not admitted wrongdoing or paid any fines. Cherin, also executive director of Harbor Trucking Assn., predicted that many of the state wage rulings could be overturned on appeal and said that all of the recent actions were part of a Teamsters’ plan to force the union on drivers who are mostly content with their jobs.

The long-running dispute centers on allegations by “short-haul” drivers who deliver goods to warehouses and railway depots around Southern California. The drivers say that a profession that was once a bulwark of the middle class has been transformed into a low-wage backwater, as companies insist on employing independent owner-operators, rather than full-fledged employees.

Some drivers contend that they must operate with company trucks, under leases that have grown exorbitant as the companies were forced to upgrade as part of Los Angeles’ 2008 Clean Truck Program, heralded for cleaning the air around the two ports. Together, L.A. and Long Beach ports handle more cargo than any other harbor complex in the world.

When lease payments are added to the cost of maintenance, fuel, parking, tires, insurance and vehicle fees, drivers say their gross pay can be trimmed to as little as $20,000 a year, despite long hours.

“We are making peanuts over there. Some people working at McDonald’s, they make more money than us,” said Daniel Linares, 58, a Pacific 9 driver who said he hopes the union will be brought in, “so we can get decent pay and benefits, in order to lead a decent life.”

Cherin sharply disputed the notion that drivers had been mistreated, saying the majority prefer operating independently. Some clear more than $100,000 a year despite significant overhead costs, he said. “Like any industry,” Cherin said, “you have contractors that are very successful and those who are not.”

The Teamsters filed a complaint in November with the NLRB, alleging that Pacific 9 had retaliated against drivers who supported the union — giving them less work and denying maintenance and repairs for their trucks. Workers were threatened with termination for supporting organizing efforts, the union contended.

Pacific 9, which has 156 employees, denied making threats. Cherin repeated his accusation that the union had been driven to find a way into the companies after the courts overturned a Clean Truck Program provision that required companies to use employees, rather than contractors, as drivers.

Officials in the labor board’s Los Angeles office made two findings helpful to the union: that the workers at Pacific 9 were not truly independent contractors but employees and therefore subject to unionization, and that there was evidence the National Labor Relations Act had been violated.

The company conceded neither of those points. But it agreed this week to post a notice at the Carson yard notifying employees of their right to organize, to join a union and to not be threatened, or even questioned, about union activities.

One union official said other trucking companies had imposed even more onerous conditions on workers. A total of 515 drivers serving the two ports have filed complaints with the state Labor Commissioner’s office about wage disputes, many saying exorbitant deductions had been taken from their checks.

The state agency has sided with drivers in all 30 of the cases decided so far, determining that the workers had been misclassified as independent contractors when their job requirements made them tantamount to employees.

Cherin said the industry had been “painted with a broad brush,” and predicted many of the $3.6 million in wage sanctions could be overturned. Union chief Tate had a different view, concluding: “We are on a big roll here.”