City Hall advisors propose a half-cent increase to raise $4.5 billion over 15 years to fix the most damaged roads and sidewalks. 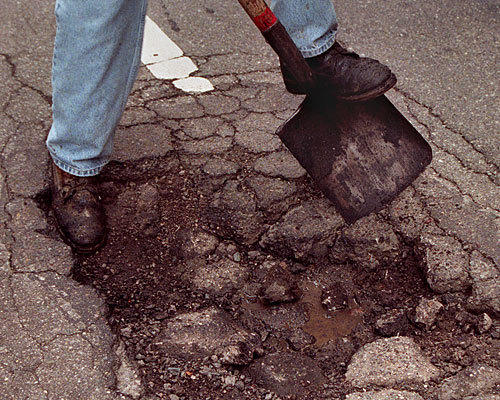 More than 35% of L.A.'s streets, or 8,200 lane miles, are considered to be failing or near failing, receiving grades of D and F, a recent analysis found.

One year after Los Angeles voters rejected a sales tax increase, the City Council is looking at trying again — this time by tying the money to the repair of the city's deteriorating network of streets.


Two high-level City Hall policy advisors recommended Tuesday that lawmakers place a half-cent tax hike on the November ballot that would generate $4.5 billion over 15 years. The proceeds, they said, would pay to fix the most severely damaged roads and sidewalks.

Passage of a tax could add momentum to Mayor Eric Garcetti's "back to basics" campaign, which focuses on upgrading basic services. The proposal also could help city leaders resolve a potentially costly disability rights lawsuit filed by wheelchair users who say buckled sidewalks block their access.

More than 35% of L.A.'s streets, or 8,200 lane miles, are considered to be failing or near failing, receiving grades of D and F, a recent analysis found. City officials also said Tuesday in a new report that 40% of the city's sidewalks may be in need of repair.

City Administrative Officer Miguel Santana and Chief Legislative Analyst Gerry Miller, who wrote the report, said the proposed ballot measure would generate $3.86 billion for roads and potentially $640 million for broken sidewalks. That would allow for the reconstruction of 8,700 lane miles of streets — including some that are expected to fail over the next 15 years.

Officials do not yet know the number of miles of sidewalks that could be repaired. The sales-tax proposal would need the approval of two-thirds of voters.

Several elected officials contacted by The Times, including Garcetti, said they had not decided whether to back the proposal. Council President Herb Wesson sounded the most enthusiastic, saying a November election — which would feature contests for governor and other state offices — would mean higher turnout and a "better opportunity for victory" than a city election.

"Without a doubt … this city needs some kind of additional revenue stream for us to take care of our business," he said.

Last year, Wesson led an unsuccessful campaign for a citywide tax increase that would have imposed an extra half cent of sales tax on every dollar spent. The measure was designed to raise more than $200 million annually and help the city recover from a financial crisis sparked in part by the economic downturn.

At the time, Councilmen Mitchell Englander and Joe Buscaino also had been pushing for a bond measure — linked to a property tax increase — to cover street repairs. They shelved their proposal to improve the prospects of the sales-tax increase. Under state law, Wesson's tax measure needed a simple majority because its proceeds would have gone to general government programs, not a specific purpose. But it still failed to win passage.

On Tuesday, a neighborhood leader who campaigned against the March 2013 sales-tax increase criticized the latest proposal.

Jack Humphreville, who writes about L.A.'s budget for the website CityWatch, said city elected officials have used money that should have gone to road repairs to fund excessive employee salaries and benefits. "They were grossly negligent over the last two decades in maintaining our infrastructure," Humphreville said.

Gary Toebben, president of the Los Angeles Area Chamber of Commerce, said his organization is concerned about the burden a new tax could place on businesses and consumers. Toebben said he also wanted to know whether the Metropolitan Transportation Authority would pursue a separate sales-tax hike for transit services in 2016. "If you keep adding taxes, eventually you reach a point where people say that's just too much," he said.

If approved, the streets measure would push the city's sales tax rate to 9.5%, costing the average household an additional $91 per year, according to city officials. Lawmakers must decide by this summer if they want to pursue a sales-tax hike in November. Another option would be to hold off until 2016, when the contest for president would send turnout even higher. With road repair costs growing, "delaying is not an option," Englander said.

"A presidential year is always great," Wesson added. "But can this city wait that long? You have streets that are falling apart."

Miller and Santana, the council's policy advisors, said a sales-tax hike is preferable to the bond measure proposed two years ago. The sales-tax plan would produce 50% more revenue and spread the cost over a greater number of people, including motorists who use city roads but live elsewhere, they said.

A sales-tax hike also would allow the city to pursue a "pay-as-you-go" strategy with the repairs, Santana said. "It saves the city interest because we're not having to borrow," he said.