But nearly a quarter of lane miles are still in poor condition, the highest percentage of any California region, the study says. 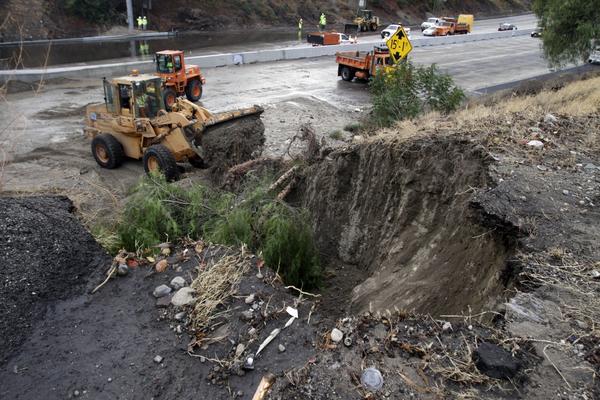 About 22% of the 6,295 freeway miles in Los Angeles and Ventura counties have major potholes, severe cracks or are otherwise in bad condition. Above, bulldozers clear a mudslide off the 5 Freeway.

Southern California freeways are smoother than they were two years ago, but nearly a quarter of lane miles are still in poor condition — the highest percentage of any California region, according to a new pavement quality study.


About 22% of the 6,295 freeway miles in Los Angeles and Ventura counties have major potholes, severe cracks or are otherwise in bad condition, according to a statewide Caltrans survey of pavement conditions from 2011 to 2013. That figure is a dramatic improvement from two years ago, the study said, when about one-third of area freeway miles were in poor condition.

Statewide, 9% of highway miles are in poor condition, better than the 16% found in 2011.
"We just made some great strides," said Caltrans spokesman Matt Rocco. "But we need to maintain this."

Some of the most badly damaged pavement can't be repaired. It's instead torn out and repoured, which costs 10 times more per mile than standard maintenance. To defray those expenses, Caltrans used two one-time sources of funding: the 2009 Recovery Act and a state transportation bond that voters approved in 2006, Rocco said.

State revenue from gas taxes peaked at about $2.1 billion in 2006 and has fallen every year since as Californians drive less and buy more fuel-efficient cars. Continuing to patch more than 750 miles of pavement annually, as crews did in the last two years, isn't sustainable, Rocco said, unless Caltrans can find new ways to fund highway repairs.

The agency projects that properly maintaining all of California's freeways would cost about $2.8 billion over the next 10 years. Right now, about 23% of that funding, or $685 million, will be available, the study said. Without more money, needed repairs could double to 34% in the next decade, the report said.

Los Angeles streets are in even worse condition and facing similar funding problems. A city report last week recommended increasing the sales tax by a half-cent for 15 years to cover an estimated $4.5 billion in repaving and rebuilding costs for roads and sidewalks.

Insurance studies have shown that Southern California is one of the most expensive places to own a car in the country. Potholes cost the average driver more than $800 a year in additional maintenance and depreciation.