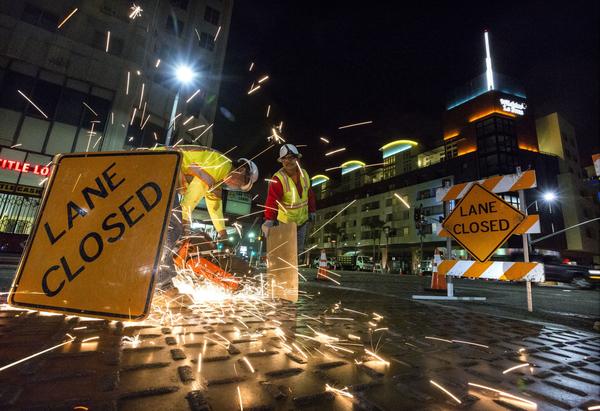 No tunnel has yet been bored. No station has been built. Not a single track has been laid. But even the most preliminary work on the long-awaited Westside subway appears to be rousing the latent forces of Not in My Back Yard.


In Windsor Village, a homeowner who lives next to a construction staging area awoke at 3 a.m. one morning to the yells of workers and the beep-beep-beep of backing trucks. Now his breakfast room looks out on a 2 1/2-story sound wall hastily erected to contain the noise.

In the Miracle Mile, activists are gathering signatures in hopes of stymieing the Metropolitan Transportation Authority's goal of around-the-clock work starting Aug. 1. Their "Sleepless in Miracle Mile" petition says the noise "would condemn thousands of residents to nine years of living hell."
And in Beverly Hills, the City Council voted to weigh in on every permit application Metro files with the city rather than let staff decide them. The city said it wants to protect residents and businesses during a time of unprecedented disruption, but one county supervisor contends Beverly Hills is trying to stall the $6.3-billion subway.

After more than a quarter of a century of often rancorous debate and study, the nine-mile Purple Line extension is poised to become a reality. Many traffic-weary Westsiders, including once vociferous opponents in Beverly Hills, say they look forward, in the remote future, to being whisked underground to downtown.

But they find daunting the specter of years of disordered traffic and sleep patterns along one of the nation's most congested corridors.

From the current terminus at Wilshire Boulevard and Western Avenue, the line under Wilshire will be built in three phases. The first will bring new stations at La Brea and Fairfax avenues and La Cienega Boulevard. Barring delays, completion of those is scheduled for 2023. For the $2.8-billion first phase, Metro anticipates about $2.1 billion in federal grants and loans, with the balance funded from city, county and federal sources.

Once envisioned as a "subway to the sea," the Westside extension now is planned to reach only to the Veterans Affairs campus in West Los Angeles. When the line opens to La Cienega, the Federal Transit Administration forecasts about 17,300 average weekday trips. The completed line, expected to make its debut in 2035, might carry more than 49,000 daily riders.

Before those milestones can be reached, Angelenos will endure an epic dig through the city's midsection. Major work is expected to begin early next year. It will entail relocating miles of utility lines (a task already underway), demolishing several buildings, removing curb-to-curb asphalt on Wilshire and installing temporary decking to allow traffic to flow while, 60 feet below, gigantic machines excavate tunnels and workers erect stations within them.

The concerns recall the problematic construction of the Metro Red Line subway through Hollywood in the 1990s. The project was plagued by cost overruns and delays and, notably, the partial collapse of Hollywood Boulevard.

For the Westside line, Metro is in the process of acquiring 22 parcels and has already alerted bank branches, rug merchants and gallery owners that their buildings will soon face the wrecking ball. Among the dislocated is the A+D Architecture and Design Museum.

"A year after we opened, I discovered that Metro was going to take the building," said Tibbie Dunbar, the museum's executive director. "It was heart-wrenching and shocking." Dunbar, a believer in public transportation, said the museum is looking at sites downtown — miles from its symbiotic neighbor, the Los Angeles County Museum of Art.

"People really don't know there are whole blocks of Wilshire going to come down and portions will turn into staging sites for the next nine years," said James O'Sullivan, president of the Miracle Mile Residential Assn. Landlords are "scared out of their minds," he added, that tenants will steer clear in anticipation of the clatter of overnight excavation.

Jeff Healy, who moved to his Windsor Village house two years ago, does not want to move. He is adjusting to the nighttime conversations of workers and backup alarms in the staging area next door. After he complained to Metro, workers erected a temporary sound wall. A larger beef now, he said, is the trash cluttering the site's perimeter.

"The wall is an eyesore, as is the trash," said Healy, who takes the bus to work and said he welcomes the Purple Line extension. "The noise is not so bad."

Subway construction won't be accomplished without din, dust, vibration and street closures, Metro officials say, but 24-hour work will last for only a few weeks, said Dennis Mori, executive officer of project management. After an initial period of digging and pile installation, he said, tunneling itself will be less disruptive. Of course, there will be the nighttime rumble of trucks hauling away 1.1 million cubic yards of dirt.

"While we take community concerns very seriously, there is simply no such thing as 'immaculate construction,'" Metro spokesman Dave Sotero said. "Some community groups appear to be sending a mixed message: 'Yes, we support the subway, but don't touch anything, and don't inconvenience us in any way.'"

Metro anticipates asking within a month for city permission to operate around the clock at three locations on Wilshire to accomplish work that can't be interrupted and to speed the overall project.
The city allows construction noise from 7 a.m. to 9 p.m. on weekdays and 8 a.m. to 6 p.m. Saturdays, said Richard Tefank, the Los Angeles Police Commission's executive director. Before allowing work at night and on Sundays, he might ask work crews to quiet backup beeps, to build "sound blankets" around generators or to jackhammer only during the day.

He expects to decide this summer whether to grant temporary permits. Once Metro selects a contracting team, likely by July 31, Tefank will work with it on the finer details of noise alleviation.
La Cienega, the last station in the first phase, is under Beverly Hills' purview. Bryan Pennington, Metro's executive director of engineering and construction, said the agency is attempting to reach an agreement with the city to streamline permit approval for utility relocation and other work.

If the permit issue isn't resolved, Los Angeles County Supervisor Zev Yaroslavsky said, Metro will sue Beverly Hills. The lawsuit would assert that, as a state-chartered agency, Metro has jurisdiction over Beverly Hills when it comes to projects of "regional significance," Yaroslavsky said.

"They're trying to slow-walk this thing," he said. "It's very clear. If it doesn't get resolved in a professional way, that'll end up in court, too."

It would be the fifth subway-related lawsuit in three years between Beverly Hills and Metro. Beverly Hills and the local school district previously challenged the agency's environmental review and decision to tunnel under the local high school to reach a proposed Century City station.

The key, Tefank said, will be good communication between Metro, residents and community leaders. "This is all about balance," he said, "about recognizing that a project has to be built and will be built, and that nighttime work reduces the inconvenience of the time that it takes for it to be built."