A tunnel under Sepulveda Pass? It might be yours for 25 cents a day 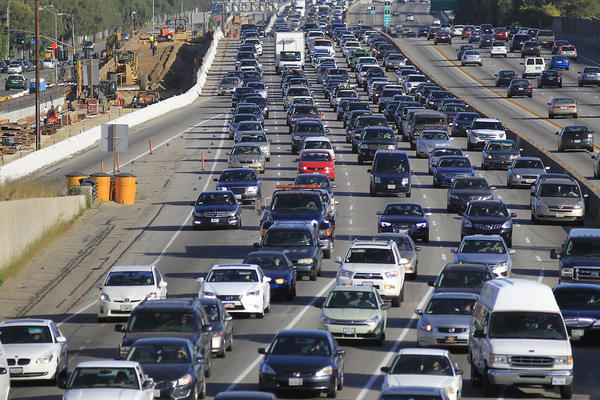 Traffic crawls along the northbound 405 Freeway during rush hour in Westwood.


Having experienced the misery of commuting from the San Fernando Valley to Santa Monica, my ears always perk up when someone mentions building some kind of rapid transit through the Sepulveda Pass. There have been ideas floated, but the magnitude of the project, the technical challenges and the expense have always made an alternative to the 405 Freeway sound like a distant dream.


It’s true that Measure R, the half-cent sales tax increase passed in 2008, included about a billion dollars to begin developing a transit line along the 405. But transportation planners estimate that it will cost anywhere from $6 billion to $20 billion to build a rail connection from the Valley to the Westside. Metro is studying the possibility of building a tunnel under the Sepulveda Pass through a public-private partnership -- with a toll road and a privately operated rail line -- but that will still require some serious public money.

Yet the possibility of easing the most congested corridor in the nation is so tantalizing that Los Angeles voters might just be willing to tax themselves again to build it, right? That’s what transportation advocacy group Move LA is certainly hoping. Last week during a conference focused on developing a new half-cent sales tax increase proposal, Move LA organizers made the Sepulveda Pass tunnel a key focus of the discussion.

Move LA is pitching the sales tax measure for the November 2016 ballot, with a eye toward raising $90 billion over 45 years. The group estimates that it would cost the average county resident about 25 to 30 cents a day. This would be on on top of the existing Measure R half-cent tax increase for transportation.

After the loss of Measure J (a 30-year extension of the Measure R tax, which voters narrowly rejected) in 2012, Move LA and the Metropolitan Transportation Authority are approaching the ballot measure cautiously. They’re trying to build more county-wide consensus on needed transportation projects, with the incoming Metro board president, Mayor Eric Garcetti, promising a more “humble Los Angeles city” as he courts the San Gabriel Valley and South Bay cities that rejected Measure J.
However, Garcetti is going to have to look first at his own city, where a proposal for a sales tax hike to pay for street repairs could jeopardize Metro’s proposal.

As David Zahniser and Laura J. Nelson reported Tuesday, there is concern among transportation advocates that back-to-back measures may undermine support for a second tax increase.  "When you need a two-thirds vote" to pass a transportation measure, "you don't really start out with any margin for error," Move LA executive director Denny Zane told The Times.

It’s possible that L.A. city voters could support two sales tax hikes in two years. There’s also a possibility that voters may feel overtaxed and reject both. Or the dueling measures might lead voters, like me, to make a choice about which they would rather have fixed: the horrible commute over the Sepulveda Pass or the crumbling streets leading to the 405 Freeway.