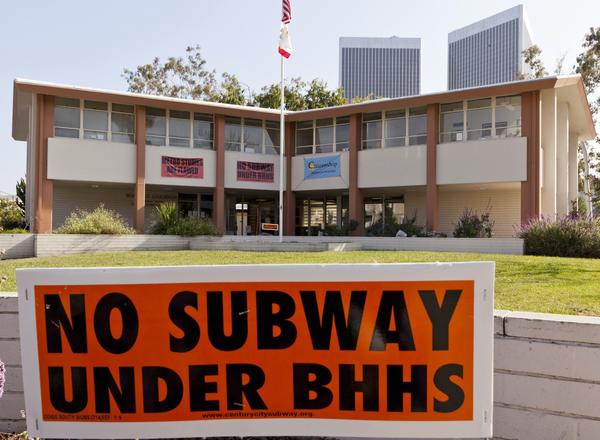 Signs opposing a subway tunnel construction planned under Beverly Hills High School are seen here posted at the district offices in 2012. The district superintendent disagrees with a judge's recent decision clearing the way for the project.


A judge who sided with the Metropolitan Transportation Authority this week in a drawn-out battle over the seismic and environmental effects of the planned Westside subway "did not consider the facts," the superintendent of the Beverly Hills Unified School District told The Times on Thursday.


On Wednesday, Los Angeles County Superior Court Judge John A. Torribio ruled that Metro followed environmental law when assessing the possible risks of a nine-mile extension of the Purple Line subway through the heart of the Wilshire corridor.

But Beverly Hills Unified Supt. Gary Woods said the judge had not weighed the findings of the city's experts presented during the environmental review process.

"The court’s decision does not change the fact that the MTA continues to put people at risk by failing to do a thorough seismic analysis along its routes," Woods said in an email.

The school district and the city of Beverly Hills sued Metro two years ago, claiming in part that the risks of tunneling under the school were not adequately considered. Neither Woods nor the Beverly Hills city attorney, Larry Wiener, would say whether they planned to file an appeal.

The route Metro has chosen for the subway includes a station near Constellation Boulevard in Century City, two blocks west of Beverly Hills High School. The project will require tunneling under parts of the campus.

Metro considered an alternative station at Santa Monica Boulevard but discarded it after agency studies found a complex earthquake fault zone in that area.

Woods said the school district and nearby property owners were forced to spend "millions of dollars" and years investigating Metro's environmental and seismic analysis.

"Not a single active fault has been found by any of the numerous investigations," Woods said. "MTA refuses to consider the data – the facts – on the existence, or non-existence of faults."

However, Metro spokesman Dave Sotero said independent tunnel experts and a safety advisory panel found "substantial evidence of active faulting" along Santa Monica Boulevard, and none near the station location along Constellation.

As currently planned, the nine-mile line, slated to open in 2035, will include seven new stations between Koreatown and Westwood.

Had Metro lost the lawsuit, the Purple Line could have faced years of delay and millions of dollars in extra costs while new environmental impact studies were completed, Sotero said.

Last year, Beverly Hills sued the Federal Transit Administration and the U.S. Department of Transportation over grants and loans allocated to the subway, saying the project violated environmental, transit and administrative laws.