Los Angeles 2020 Commission calls for changes to improve the city

The panel recommends 13 steps, including higher wages and new DWP oversight, to 'put the city on a path to fiscal stability and renew job creation.' 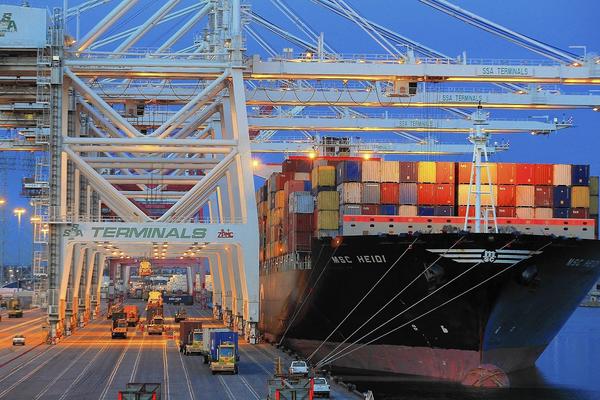 Containers are unloaded from a ship at the Port of Los Angeles. The Los Angeles 2020 Commission, composed of prominent business, labor and civic leaders, recommended that the L.A. and Long Beach ports be combined into a single entity to bolster their market share.

Three months after it painted L.A. as a metropolis stumbling into decline, the Los Angeles 2020 Commission offered 13 recommendations Wednesday that it said would attract jobs and "put the city on a path to fiscal stability."


The group of prominent business, labor and civic leaders called on elected officials to enact a wide-ranging series of policy initiatives: increasing the minimum wage, combining giant twin harbors into a single port, altering oversight of the Los Angeles Department of Water and Power and bolstering efforts to promote regional tourism.

All the actions were necessary, commission members warned, to keep Los Angeles from becoming "a city left behind in the 21st century."

The panel released its report a day before Mayor Eric Garcetti was scheduled to give his first State of the City address.

"The City Council and the mayor ought to give a thumbs-up or thumbs-down to each one of these," said commission co-Chairman Austin Beutner, who was former Mayor Antonio Villaraigosa's "jobs czar."

Garcetti offered a brief response to the report, thanking the panel but declining to say whether he supported or opposed the various proposals. "Mayor Garcetti always welcomes new ideas as he works to reform City Hall and improve our economy," spokesman Yusef Robb said.

The commission, created last year at the prompting of City Council President Herb Wesson, called for city pension agencies to make more conservative projections about their investment returns. It proposed boosting voter turnout by moving city elections to coincide with even-year state and federal elections. And it called for the ports of Los Angeles and Long Beach, which compete fiercely for cargo shipments, to join forces to shore up their shrinking share of the U.S. market.

The panel did not delve deeper into some issues it raised three months ago in a strongly worded report on the city's economic health. In that document, the panel sounded the alarm over rising City Hall pension costs, saying leaders had been captive to "wishful thinking and avoidance of hard choices."

In its follow-up report, the commission offered no specific recommendation on the size of benefits. Instead, it suggested the city form a temporary Commission on Retirement Security to gather "an accurate understanding of the facts" concerning pension costs.

Councilman Paul Krekorian, who heads the council's budget committee, voiced disappointment at the lack of specifics on pension benefits. "I would have hoped that the commission would have the facts that it needed in the time that it's been doing its work," he said.

Beutner, who once considered running for mayor of L.A., said a follow-up commission is needed because the 2020 panel received conflicting information on pensions. The 2020 group did specify, however, that it prefers preserving fixed pension benefits for city retirees because they help maintain "a stable and experienced workforce."

Commission co-Chairman Mickey Kantor, a former U.S. Commerce Secretary, said the panel had to limit its scope. "We're 13 people without staff," he said. "So we dealt with … what we understood."

The 2020 Commission joined the national chorus favoring higher pay for low-skilled workers, saying the region can "do better than $10 an hour by 2016." In an interview, Kantor said the higher wage should be imposed at least countywide and predicted that other counties would follow suit.

A substantial portion of Wednesday's report focused on the reconfiguration of the city bureaucracy. Beutner said the commission's single most important proposal is the creation of an Independent Office of Transparency and Accountability.

That office would have an executive director and about 10 staffers and function like the Congressional Budget Office in Washington, providing an "honest score card" on how the city spends taxpayer money.


"There is no place for an average Angeleno or, for that matter, someone who works at the L.A. Times, or anything in between, to go for facts," he said in an interview.

Similarly, the 2020 panel recommended the creation of a Los Angeles Utility Rate Commission to oversee the Department of Water and Power, the nation's largest municipal utility. DWP commissioners currently volunteer their time and are appointed by the mayor. Under the 2020 Commission's recommendation, panel members would still be chosen by the mayor but would receive full-time salaries and their own staff.

The proposal would "take the politics out of the DWP," an agency "often subject to political interference," the 2020 panel said.

But former DWP Commissioner Nick Patsaouras said the changes would make the utility's leadership more political, not less, with members of the new utility commission currying favor from elected officials and others to keep their high-paying jobs.


Wesson promised to "properly vet" the 2020 panel's recommendations and said he is interested in some of its proposals. But he disputed the idea that city lawmakers intrude too much into DWP matters.

"We have a responsibility to do what we can to ensure the DWP functions as effectively as it can," he said. "We were elected by the people to be engaged, and we are engaged."

Beutner ran the DWP in the months after the council blocked a plan by former Mayor Antonio Villaraigosa for four consecutive electricity rate hikes. Another 2020 Commission member is Brian D'Arcy, who heads the powerful union that represents most DWP employees and has been at odds with Garcetti.

Other changes proposed by the commission could face political opposition. The ports of Los Angeles and Long Beach have their own governing boards, although they have sometimes cooperated, as with the creation of the Alameda Corridor rail line to speed shipment of goods inland.

"There are some special interests that think it might be easier to deal with one [port], rather than two," Foster said. "I get very skeptical when I see consultants and lawyers trying to put together a deal."