Fare Dodging Is an Organized Rebellion in Stockholm, and It’s Winning 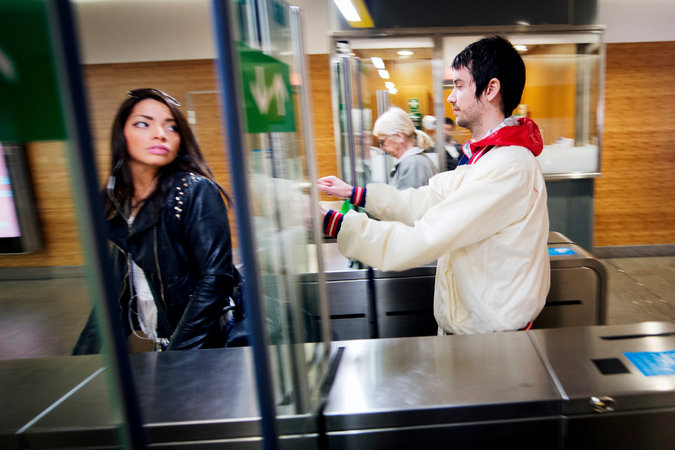 STOCKHOLM — The first target stumbled through the Hornstull metro station here with her nose in her purse, too harried to notice the man sidling up behind her.

She swiped her fare card. A pair of barriers slid apart, and before they could close, two train rides had been unlocked for the price of one.

Too easy, the fare thief announced, returning through the gates.

“I’ve got a little practice,” said the man, Christian Tengblad, 32, stealing a look back at a station agent.

Every transit network has its fare beaters, the riders who view payment as either optional or prohibitively expensive. Many cities, most notably New York, view turnstile-jumpers as a top policing priority, reasoning that scofflaws might graduate to more serious crimes if left alone.
But in Stockholm, the offenders seem to have defeated the system.

For over a decade, Mr. Tengblad has belonged to a group known as Planka.nu (rough translation: “free-ride.now”), an organization with only two prerequisites for admission: Members must pay a monthly fee of about $15 and, as part of a continuous demonstration against the fare, promise to evade payment every time they ride. If travelers keep their side of the agreement, the group will cover any of the roughly $180 fines that might result. (An unlimited ride pass for 30 days costs about $120.)

The group’s efficiency in evasion has created an enviable business model. Last year, the group took in more than twice as much money — more than $7,500 per month — as it paid out in fines, organizers said.

The agency that operates the metro system, Stockholm Public Transport, seems to have grown increasingly discouraged, especially after the failure of a recent investment in taller gates to stop the fare-beaters.

“We could build a Berlin Wall in the metro stations,” a spokesman, Jesper Pettersson, said. “They would still try to find ways to dodge.”

Since Planka’s founding 13 years ago, its legend and influence have grown. Though it has about 500 official members, the organization has helped lead many thousands more to simply stop paying fares on their own, according to transit officials. Mr. Pettersson said that about 15 million trips last year were not paid for — 3 percent of all rides. The Planka Facebook page has more than 30,000 “likes.”

High rates of evasion have been reported among high-school students, particularly in the city’s suburbs, Mr. Tengblad said. The group has also sprouted sister organizations in Goteborg and Oslo, and is credited with influencing the free-fare protesters of Movimento Passe Livre in Brazil, who carried out demonstrations last year.

Efficiency has improved with time. Planka’s organizers said that 30 to 40 percent of membership dues were typically required to pay off fines. That means that of the 500 paying members, only about 15 reported being caught per month. In 2004, the group said, about 80 percent of fees were needed to cover fines.

There have been public pleas from Swedish authorities and international searches for a dodger-proof turnstile, instructional videos teaching new group members how to evade payment, and at least one fare-beating dog trained to open the barricades for its owner.

That maneuver: Let the animal squeeze through the small space beneath the gates, then coax it to jump up and down until the sensor is set off to open them. Well-developed canine leg muscles are required.

Most other strategies appear to involve closely following a fellow traveler, using a scarf or jacket to set off sensors on the far side of the barriers, or, for the city’s slender evaders, simply slipping through the sliding gates.

The dodgers’ ubiquity seems to have weakened the resolve of those charged with stopping them. On a recent afternoon at Stockholm Central Station, a station agent sipped an energy drink beside the gates as riders filed past.

One group member, Alex Berthelsen, 29, said that many guards and fare controllers — employees in yellow suits who are expected to check tickets — had come to recognize him, but still failed to stop him.

Now, Mr. Berthelsen said, he often exchanges knowing nods with them during station demonstrations held by the group.

The agency said it had made gains with “the leisure dodger,” citing a reduction in revenue losses since higher gates were installed. (The figure is still estimated to be about $36 million annually.)
But Mr. Pettersson acknowledged that the most determined evaders would probably remain a problem in perpetuity.

“These hard-core dodgers,” he said, “I think we will never reach them.”

During a recent gathering at the group’s headquarters in the Sodermalm district of central Stockholm — a space decorated with protest stickers, a half-dozen empty beer cans and a vegan takeout menu for the occasional late-night session — members outlined the ideology underpinning their actions. The transit system should be financed through taxes, they said, ensuring that a greater share comes from affluent residents and drivers.


Each evasion is treated as part of a “collective fare strike,” Mr. Berthelsen said, and is a signal to fellow travelers that the system should be fare-free. The more ostentatiously a rider can breach the system, according to this logic, the better.

As a result, group leaders have chafed at a recent trend of forged electronic tickets, displayed on phones, which can fool transit personnel without creating a scene.

“It normalizes that people have tickets,” said one member, Sandra Lindquist, 32.

Disdain for the fake passes is shared at the transit agency, which has begun testing technology that could scan a phone to verify a ticket’s validity.

If history is instructive, though, the dodgers appear likely to remain a step ahead. About six years ago, as officials were considering installing the new gates, a Planka member filmed a video in Lyon — where the barriers were already in use — to demonstrate how they could be conquered.

Outside an agency meeting in Stockholm to discuss the potential purchase, protesters’ signs and shouts shared a simple message: Save your money. We already know how to breach the new barriers.