How I learned to Stop Worrying and Love the Train

I used to bike to work in Los Angeles. I liked it so much I wrote a column about it last year in the LA Times.

Then I got hit by a car coming home one night last April on Sunset Boulevard in Silver Lake. I kept cycling to work most of last year, but after my bike was stolen and I was nearly hit a half dozen times, I eventually gave up.

I wrote about that experience earlier this year, including how I resorted to my car as the main mode of transportation to and from work. I described how convenient and easy it was to cruise into work at a 50-mile-an-hour clip and how I had become the “opportunistic, lane-hopping L.A. driver I once joked about.”

I knew my honesty would leave me open to criticism, but whoa, LA really let me have it.

Some cyclists called me a wimp, saying they had been hit multiple times, so toughen up and get used to it. A few said, “So if you got hit in your car, would you stop driving?” No I wouldn't, because I’d have the armor of an automobile, so I’d probably still be alive.


Many readers lambasted me for becoming part of the problem -- the aggressive drivers who terrorize cyclists and pedestrians and contribute to the city’s smog levels that are the worst in the country. I will clarify one point: I’m not a maniac out there. I drive with the flow of traffic, which on many stretches of Sunset tends to be 40 to 50 miles an hour. 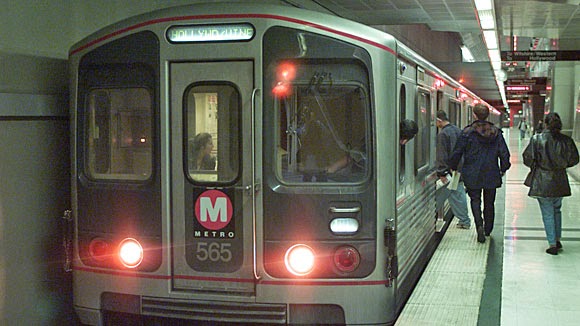 Then there were the public transit people. They made the most compelling argument: Why was my argument framed only as bike vs. car? What about buses? What about the subway and light rail? (Attention Los Angeles County residents and out-of-towners -- yes, LA does indeed have a subway).

One transit advocate Tweeted: “This makes me sad. He shouldn’t bike if feels unsafe, but he never considers walking and transit instead of driving?”

Some were infuriated I didn’t even mention public transit, especially considering I live in Los Feliz, which is close to the Metro Red Line stop at Sunset Boulevard and Vermont Avenue.

The same transit proponent went a little overboard on Twitter: “I want to find out where he lives and wait outside his house for him one morning to have an intervention okay maybe too creepy.”

Still, I got the message. Why wasn’t I taking the Metro?, I asked myself.

Mainly because I tend to be lazy and impatient, which I think is a fairly common human trait. But also because I like to exercise in the morning before work and I usually run a little late, so the car was always the easiest choice. Also, the car commute takes me 20 minutes door to door, while I knew the subway ride would take about twice that.

I began feeling guilty for adding to the region’s air pollution woes. For a long time I justified my car commute by thinking “How is the exhaust from one car really going to impact the environment in a giant city that’s already polluted?” But I started to see the inverse of that argument: One person can’t save the planet, but I can make it a little better by not driving every day.

In March, I injured myself playing basketball and the doctor encouraged me to walk more as part of my rehab. I figured this was my chance to give the train a go.

Since I started riding the Metro two months ago, I haven’t looked back. It’s now my preferred mode of travel and I only drive when my job requires it.

With gas prices typically at more than $4 a gallon, I know that I’m saving serious cash every month, not to mention the wear and tear on my car.

Though I have to leave earlier than before, I’m enjoying the slower pace of transit commuting. During my 20-minute morning walk from my apartment to the Red Line stop I usually stream National Public Radio or listen to music on my smart phone.

I read magazines and newspapers on the train, which is relaxing. It’s also nice to walk among my fellow Angelenos instead of being isolated in my car bubble. The best part is the ride home: I don’t have to sit in traffic or deal with it at all, which is much less stressful.

So that’s it. My LA commuting saga is over. I’m taking the train as often as possible and enjoying it. I’d encourage anyone else to give it a try.
Newer Post Older Post Home