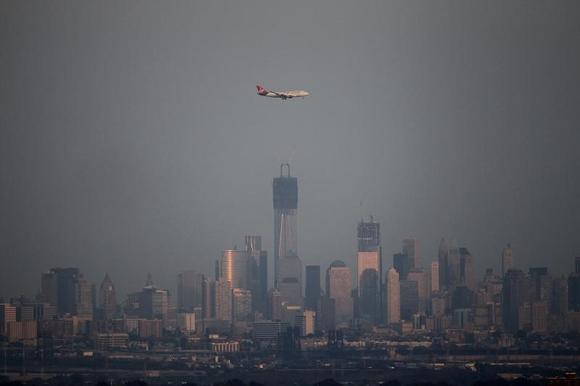 An airplane flies past the haze covered skyline of New York's Lower Manhattan as seen from the Eagle Rock Reservation in West Orange, New Jersey, August 31, 2012.


(Reuters Health) - The tiny particles in vehicle exhaust and other sources of air pollution may hasten cognitive decline in older adults, according to a new U. S. study.

“We decided to examine the link between air pollution and cognitive function in older adults because there is growing evidence that fine particulate matter air pollution affects brain health and development, but relatively little attention has been given to what this means for the aging brain,” said Jennifer Ailshire, who co-wrote the report.

Ailshire is with the Center for Biodemography and Population Health and the Andrus Gerontology Center at the University of Southern California in Los Angeles.

She, along with Philippa Clarke of the Institute for Social Research at the University of Michigan, Ann Arbor, say that based on their results, improvements in air quality may be an important strategy for reducing age-related cognitive decline.

There has been some evidence that people living in more polluted areas have greater rates of cognitive decline, and the link is not explained by wealth or other social factors, the researchers point out in The Journals of Gerontology: Series B.

They gathered information from one wave of a large ongoing survey started in 1986, and focused their analysis on 780 participants who were 55 years of age or older at the time of the 2001/2002 survey.

Routine measurement of air pollution by census tract did not start until the late 1990s, they explain.
Cognitive function was measured by math and memory tests and participants got a score based on the number of cognitive errors they made.

Air pollution levels for each participant’s neighborhood were calculated using fine particulate levels reported by the U.S. EPA’s Air Quality  System. Those pollution particles 2.5 microns or smaller (PM2.5) can travel deep into the lungs and enter the bloodstream, past research has shown.

Poverty and other social factors as well as health problems can influence cognitive function, the authors note. And poorer neighborhoods tend to be more polluted. But after the researchers adjusted for education, employment, gender, marital status and several other factors, the differences in cognitive error rates remained.

“The emerging evidence showing a link between air pollution and cognitive function suggests air pollution may harm the brain as well as the heart and lungs,” Ailshire said in an email.

“Ideally,” she and Clarke wrote, they would want long-term data and more exact individual pollution exposures to assess the importance of PM2.5 in cognitive function.

Weuve, who was not involved in the study, is a researcher at the Rush Institute for Healthy Aging at Rush University Medical Center in Chicago.

Scientists “believe that particulate matter may affect cognitive function in older adults by its harmful effects on the cardiovascular system - which is connected to the brain through blood vessels - and possibly by directly acting on the brain itself,” Weuve said.

This type of air pollution is difficult to avoid. The most important action is the one we take as a society, by regulating the amount of pollution that gets emitted into our air, not by individual actions, she said.

“Short of confining oneself to an indoor space with filtered air, it is extraordinarily difficult (and absurd) to imagine any one person being able to, for example, stop the air pollution that emanates into his or her environment from an industrial plant tens or hundreds of miles away,” Weuve said.

“Although finding a link between the air we breathe on a daily basis and our long-term brain health is alarming, the good news is that we have made remarkable progress in the last decade in reducing levels of air pollution across the country, and there are efforts underway to further reduce air pollution,” Ailshire said.

Still, she added, the public should understand that there are health risks to living in polluted environments, particularly for older adults, and we should all be more aware of issues related to air quality.