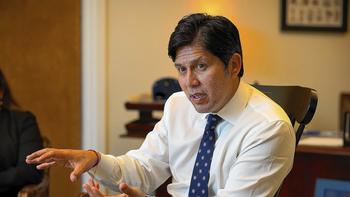 
Gov. Jerry Brown must be saved from himself, says the next state Senate leader. He needs to be talked out of starting the bullet train in the Central Valley boonies.

"I don't think it makes sense to lay down track in the middle of nowhere," asserts Sen. Kevin de León (D-Los Angeles). "It's illogical. No one lives out there in the tumbleweeds."

De León, who will become the Senate leader in October, says he supports the concept of high-speed rail, but with the caveat that track-laying begin in the Los Angeles and San Francisco areas.
Most Californians would probably agree. But good luck with that.

For various reasons, the state chose to lay the first track of the Los Angeles-to-San Francisco rail line along a 130-mile stretch between Bakersfield and Madera.

Sen. Kevin de León also questions Gov. Jerry Brown's plan to build two tunnels to carry Sacramento River water to South and Central California.
Two rationales were that the land was relatively cheap there and the flat straightaway would offer a good test for high-speed trains. But more important was that Washington insisted on it as a condition of the train project landing $3.3 billion in federal stimulus money. Those fed bucks must be spent in the Central Valley.

Why? Several anonymous sources have pointed to politics. U.S. Rep. Jim Costa, a longtime bullet-train advocate, voted for Obamacare after being assured that rail construction would begin in his Fresno district. The Democrat denies any trade-off.

But does that mean the federal mandate couldn't be changed — especially with new House Majority Leader Kevin McCarthy (R-Bakersfield) being a sworn enemy of high-speed rail, particularly if it splits farms in his district? It might be worth a try, if Brown weren't so wedded to Madera.

"If we do high-speed rail," De León says, "the governor has to be intelligent and invest the dollars at the 'bookends' — San Francisco and Los Angeles."

De León's amendments will prioritize reduction of greenhouse gas emissions and air pollution in urban areas. A prime example of a worthy project, he says, is at L.A.'s Union Station. The plan is to add substantial track capacity and move commuter and intercity trains through the terminal faster, reducing the long idling that fouls the air.

The project price tag is $350 million. The state already has committed $175 million, but an additional $158 million is needed. De León wants it to come from cap and trade. It's the kind of project these fees are supposed to pay for.

"The infrastructure at Union Station is antiquated," the senator says. "High-speed is going to come in eventually. We need to upgrade that system. Every day the Metro comes in, the Amtrak comes in and they idle their engines for hours, spewing poisonous toxins — all that crap — into the air. That increases asthma rates, particularly of poor children who live in the community. That's in my district, OK?

"The point I want to make is this: How do we invest the dollars wisely and intelligently? They should be invested in the 'bookends' in anticipation of high-speed rail."

At the same time, he continues, "we're putting hard hats to work. When people see the healthful impact this is having and all the hard hats constructing, their minds may change about high-speed rail. But out in the Central Valley, where the train's not going anywhere, no one will see the construction jobs."

Here's apparently another point: Just because De León and Brown are Democrats doesn't mean that the next Senate leader will be timid about expressing his views when they differ from the governor's. Whether he'll aggressively act on those views, however, we'll learn after he assumes the powerful office.

The tunnels would drain fresh Sacramento River water on the delta's north end and funnel it into aqueducts headed south into the San Joaquin Valley and Southern California. The $26-billion project, which includes some delta restoration, would be paid for with higher water rates and taxpayer-funded borrowing.

"I'm not quite sure if investing tens of billions of dollars in two tunnels is going to be the panacea for our water woes, particularly in Southern California," De León says. "I haven't come to a real conclusion, but we've got to be conserving water more."

He was raised by an immigrant San Diego house cleaner with a third-grade education. "From her I learned the value of hard work," the lawmaker says. "She was a woman with grace and dignity who held her head up high. I didn't want to embarrass her by getting into trouble, getting mixed up with gangs.

"But one thing I want to make clear: As highly an improbable pathway that my journey has been from where I came from to where I am, yada, yada, yada, my story is not unique. It's the story of millions of kids out there, from East L.A. to San Jose to Oakland."