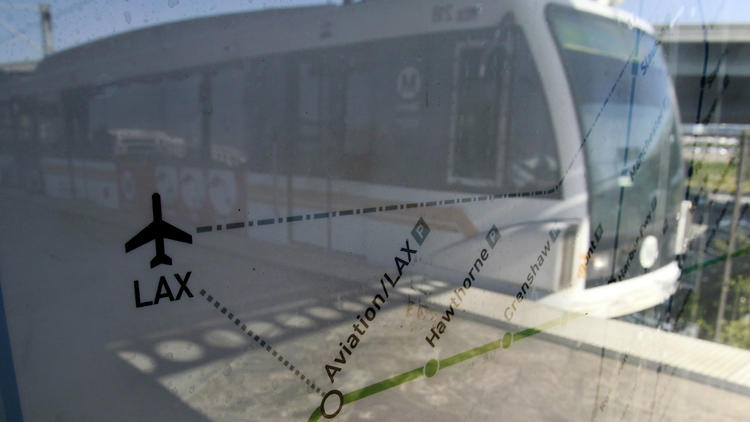 A station map shows the route of the Metro Green Line, which stops 2.5 miles short of Los Angeles International Airport.

In a slight advancement of the decades-long debate over how to bring rail to Los Angeles International Airport, transportation officials Monday voiced their support for a project they said could solve one of Southern California’s most vexing and infamous planning dilemmas.

In a report made public Monday, Los Angeles County Metropolitan Transportation Authority staff members called for a $1.7-billion project that would include a train and a new light-rail station 1.5 miles to the east of LAX’s passenger terminals.

The $200-million station at 96th Street and Aviation Boulevard would connect to the Green Line, the Crenshaw Line and a so-called "people-mover," which would likely resemble San Francisco International Airport's circulator train. Although airport officials have not finalized a route, the circulator train could connect Metro rail to a consolidated rental car facility, a planned ground transportation hub and LAX's passenger terminals.

The recommendation comes after decades of discussion over how to connect rail to LAX. Los Angeles will soon have two light-rail lines that stop less than three miles from the terminals of the country's third-busiest airport. Even if Metro votes on the 96th Street project immediately and moves to build it fast, it probably would not be done before the Crenshaw line, which is supposed to open in 2019.

Metro’s Board of Directors will weigh the proposal at their June 26 board meeting. Board members could approve the recommendation, or vote to study other options.

The Board of Airport Commissioners, which governs LAX, must also green-light the recommendation. If they don't, Metro staff will try to connect an existing light-rail station at Aviation and Century boulevards to the people-mover, the report said.

A spokeswoman for LAX said airport officials had not seen the Metro report.

In an emailed statement, Los Angeles World Airports spokeswoman Nancy Castles said the agency will work with Metro “regardless of whatever option” is selected.

The 96th Street station would be built about a half-mile north of an existing Green Line station at Aviation and Century boulevards, but each station would serve "an independent purpose," staff said.
Measure R, the half-cent sales tax county voters approved in 2008, secured $330 million for the airport connector. But it is yet to be determined who will pay for the remainder of the project, which Metro staff said will cost more than $1.5 billion regardless of which option is chosen.

The option Metro has backed is significantly cheaper than others, including building light-rail directly into the terminal area. Metro directors ruled out a direct rail link earlier this year, citing the high cost and difficulty of tunneling under the terminal area.

In project renderings, Los Angeles World Airports staff have indicated they would prefer that Metro rail connect directly to a planned ground transportation hub at Airport Boulevard and 96th Street. That would cost about $3.1 billion: $1.7 billion for the rail link, and $1.4 billion for the circulator train.

Connecting rail directly to a ground transportation hub or to the terminal area would "marginally improve transit ridership," but would come at a "very high cost," staff wrote in the report.

Despite growing pressure from the public and elected officials to close the LAX rail gap, just 1-2% of airport trips are projected to be made on Metro rail and buses by 2035, according to the Metro analysis. About 57% of trips will be made in cars, 33% in taxis, limos and shuttles and 8% by FlyAway bus.