Architect Frank Gehry was among those concerned that the planned subway trains would affect Disney Hall's acoustics. 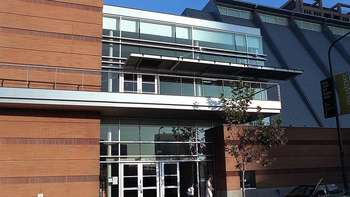 The builders of a subway that will run between Walt Disney Concert Hall and the Colburn School of Music are promising to deploy a triple helping of the most advanced noise-suppression measures to make sure the rumble of light-rail trains under 2nd Street won’t mar audiences’ musical experience or intrude on the sound quality of recordings made in the venues.

An agreement between Disney Hall’s landlord, the Music Center, and the Los Angeles County Metropolitan Transportation Authority went into effect this week, formally committing Metro to making sure that the sensitive stretch of its $1 billion downtown Regional Connector Project won’t add any audible vibrations.

The agreement sets out a process for what will happen if those preventive measures fail -- with a Music Center lawsuit to collect damages the worst-case scenario.

But Metro and Music Center officials say they’re confident that the precautions being taken will allow subways to run silent and run deep (135 feet below street level) in a way that won’t impinge upon Disney Hall’s acclaimed acoustics.

The danger is not from the typical screeches and loud rumbling noises that passengers waiting on a subway platform are accustomed to hearing. The subway, expected to begin running in 2020, is too deep for those to register in the concert venues.

The threat is vibrations created when metal train wheels pass over metal tracks. Strong vibrations could send energy waves through the ground and into the concert venues, emerging as a low-frequency rumble in the halls. So the key is to stifle vibrations at the source.

Bryan Pennington, Metro’s chief of engineering and construction, said that contractors building the subway won’t use any new technologies to accomplish that, but the transportation agency will make sure that three proven noise-reduction techniques will be pushed to their “ultimate capacities.”

He said that two of the main lines of defense are rubber padding beneath the railroad beds that support the subway tracks, and rubber insulation installed in metal fasteners that connect tracks to the railroad bed. Pennington said that typically one or the other is deployed to prevent noise problems. Metro will install both in the tracks running past Disney Hall and the Colburn School.

Pennington said that Metro’s engineering and construction contractors will be asked to find the optimal kind of rubber to use in the noise abatement padding and insulation.

Additionally, he said, the concrete slabs into which tracks are laid will be stiffened as much as possible – another way of making sure vibrations from the tracks won’t travel.

The agreement comes after more than a year of talks between Metro and the Music Center that ensued after a subway simulation test at the Colburn School yielded audible low-frequency noise, alarming, among others, Disney Hall’s architect, Frank Gehry, and its acoustician, Yasuhisa Toyota.

Metro and Music Center officials said that ensuing talks culminated in tests aimed at establishing the amount of “ambient noise” that’s detectible in Disney Hall when it’s empty and quiet – a level that Metro is now committed to keeping intact even with subways running by every few minutes.

Howard Sherman, the Music Center’s chief operating officer, said that all of Disney Hall’s tenants, including the Los Angeles Philharmonic, the Los Angeles Master Chorale and the REDCAT theater, were involved in the noise discussions over the past year.

Sherman said the cooperation from Metro has been consistently good, with all parties sharing the aim of an inviolate concert and recording experience.

Pennington said the noise abatement measures and specifications have been codified in Metro’s contracts with its subway designers and builders, the U.S. division of Sweden-based Skanska and Traylor Bros, based in Evansville, Ind., which are both construction companies, and Hatch Mott MacDonald (HMM), engineering and design consultant.

He said he had no estimate on how much those measures might add to the cost.

Sherman said it has been clear that Metro’s aim isn’t to minimize expenses but to ensure optimal sound in Disney Hall.