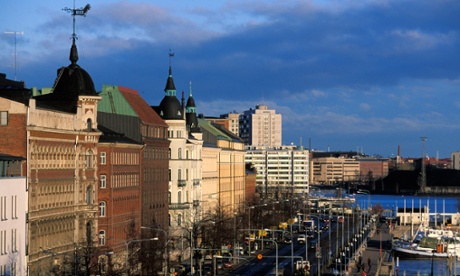 
The Finnish capital has announced plans to transform its existing public transport network into a comprehensive, point-to-point "mobility on demand" system by 2025 – one that, in theory, would be so good nobody would have any reason to own a car.

Helsinki aims to transcend conventional public transport by allowing people to purchase mobility in real time, straight from their smartphones. The hope is to furnish riders with an array of options so cheap, flexible and well-coordinated that it becomes competitive with private car ownership not merely on cost, but on convenience and ease of use.

Subscribers would specify an origin and a destination, and perhaps a few preferences. The app would then function as both journey planner and universal payment platform, knitting everything from driverless cars and nimble little buses to shared bikes and ferries into a single, supple mesh of mobility. Imagine the popular transit planner Citymapper fused to a cycle hire service and a taxi app such as Hailo or Uber, with only one payment required, and the whole thing run as a public utility, and you begin to understand the scale of ambition here.

That the city is serious about making good on these intentions is bolstered by the Helsinki Regional Transport Authority's rollout last year of a strikingly innovative minibus service called Kutsuplus. Kutsuplus lets riders specify their own desired pick-up points and destinations via smartphone; these requests are aggregated, and the app calculates an optimal route that most closely satisfies all of them.

All of this seems cannily calculated to serve the mobility needs of a generation that is comprehensively networked, acutely aware of motoring's ecological footprint, and – if opinion surveys are to be trusted – not particularly interested in the joys of private car ownership to begin with. Kutsuplus comes very close to delivering the best of both worlds: the convenient point-to-point freedom that a car affords, yet without the onerous environmental and financial costs of ownership (or even a Zipcar membership).

But the fine details of service design for such schemes as Helsinki is proposing matter disproportionately, particularly regarding price. As things stand, Kutsuplus costs more than a conventional journey by bus, but less than a taxi fare over the same distance – and Goldilocks-style, that feels just about right. Providers of public transit, though, have an inherent obligation to serve the entire citizenry, not merely the segment who can afford a smartphone and are comfortable with its use. (In fairness, in Finland this really does mean just about everyone, but the point stands.) It matters, then, whether Helsinki – and the graduate engineering student the municipality has apparently commissioned to help it design its platform – is proposing a truly collective next-generation transit system for the entire public, or just a high-spec service for the highest-margin customers.

It remains to be seen, too, whether the scheme can work effectively not merely for relatively compact central Helsinki, but in the lower-density municipalities of Espoo and Vantaa as well. Nevertheless, with the capital region's arterials and ring roads as choked as they are, it feels imperative to explore anything that has a realistic prospect of reducing the number of cars, while providing something like the same level of service.

To be sure, Helsinki is not proposing to go entirely car-free. (Many people in Finland have a summer cottage in the countryside, and rely on a car to get to it.) But it's clear that urban mobility badly needs to be rethought for an age of commuters every bit as networked as the vehicles and infrastructures on which they rely, but who retain expectations of personal mobility entrained by a century of private car ownership. Helsinki's initiative suggests that at least one city understands how it might do so.