'No 710 tunnel' activists to march on Fourth of July 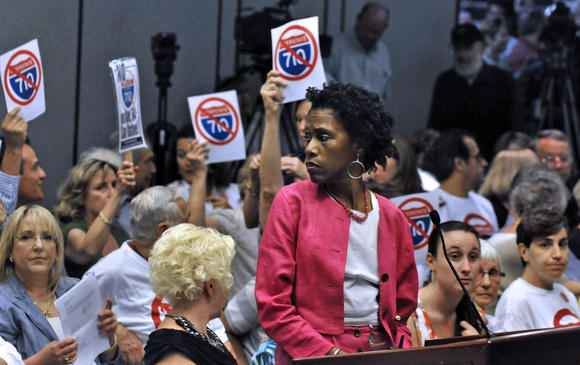 Residents hold up signs and make a little noise with a sound system malfunctioned as Michelle Smith, Project Manager of the LA Metropolitan Transportation Authority, (standing at podium) was speaking. Hundreds of Pasadena-area residents showed up at the Pasadena Convention Center Monday night, August 13, 2012, the majority of them, to protest the 710 Freeway Extension through their city. Members of Metro and Caltrans came with several different proposal options.


Activists opposed to one of the options under consideration for the completion of the 710 Freeway — a multibillion-dollar, 4.9-mile tunnel — have announced plans to march Friday in the annual Independence Day Festival of Balloons parade in South Pasadena.

Organizers say that citizens and some officials from La Cañada Flintridge, La Crescenta, Sierra Madre, Glendale, Burbank, Pasadena, San Marino and Monterey Park, as well as representatives from Los Angeles neighborhoods, will participate in the event. One local politician, Anthony Portantino, a former member of the state Assembly who is seeking a seat on the state Senate, has also vowed to be there.

"We still don't know the cost, the benefit and they (Metropolitan Transportation Authority) are still trying to sell the public a bill of goods that if you bring more cars and trucks into the neighborhood that somehow pollution will decrease." Portantino stated in a news release.

The city of La Cañada Flintridge is a member of the recently formed 5 Cities Alliance, which includes Glendale, Pasadena, South Pasadena and Sierra Madre and was designed to respond efficiently to the Environmental Impact Report (EIR) underway by Metro and Caltrans related to the tunnel project. La Cañada leaders have long taken a stance against the completion of the 710 Freeway, citing environmental and traffic concerns.

Marchers will meet at the intersection of Hope Street and Meridian Avenue in South Pasadena in time for the 10 a.m. start of the parade. Locals who want to join the cause are asked to wear red shirts.
Newer Post Older Post Home