China Touts Itself as Winner in High-Speed Rail Stakes 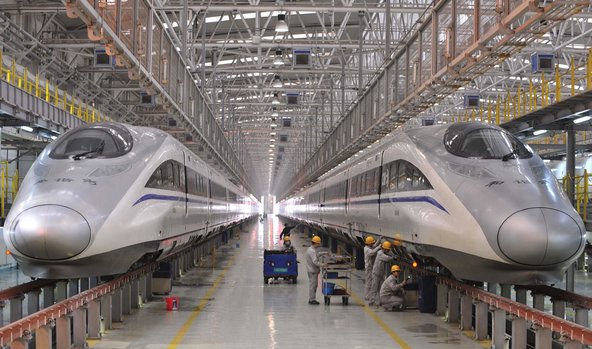 A high-speed train being inspected at a railway maintenance station in Xian, Shaanxi Province.Credit


High-speed rail has brought many benefits to China, and now one more can be added to that list: a handy point to lord over the United States.

Seeing the “revolutionary impact” high-speed rail has had on the economies and on people’s daily lives in China and Europe, it said, “Americans’ high-speed rail dream has become increasingly intense.” But, it adds, “though America leads in freight rail, its passenger rail conditions are terrible.” The article cites, by way of example, a train ride from Washington to Boston that was scheduled to take between six and seven hours but took 13 hours because of heavy rain.

The People’s Daily article was also distributed by the prominent Chinese news portals Xinhua and Huanqiu.

The Obama administration has set ambitious goals for rail in the United States. “There’s no reason Europe or China should have the fastest trains,” President Obama said during his State of the Union address in 2010. The following year he pledged to provide high-speed rail access to “80 percent of Americans” within 25 years. But despite having earmarked nearly $11 billion for the American rail system since then, little progress has been made toward meeting that goal.

The People’s Daily article also lists the various obstacles that high-speed rail faces in the United States, including political opposition and environmental concerns.

From the perspective of Chinese leaders, who brook no opposition to major infrastructure projects, the Obama administration’s efforts to upgrade tracks in the United States must indeed appear lackluster.

High-speed rail — usually referring to trains that run at more than 155 miles, or 250 kilometers, per hour — has become one of the Chinese government’s most successful large-scale infrastructure initiatives. Over the past six years, under former President Hu Jintao and the current president, Xi Jinping, the government has pumped hundreds of billions of renminbi into ensuring that China’s high-speed rail system matches any in the developed world. The system now transports nearly twice as many passengers each month as China’s airlines.

As the World Bank reported in July, construction costs per meter of rail are significantly lower in China than in Europe and the United States as a result of high volume, the low cost of land acquisition and a cheaper labor force, among other factors.

Those advantages might make a fair comparison with the United States difficult. Still, the People’s Daily article said that one American lawyer on a business trip in China was so dazzled by the country’s high-speed rail system that he became a “China fan” and began studying Chinese after his return to the United States.

Such global influence is exactly what Chinese leaders are after, targeting high-speed rail as a pillar of Chinese soft power abroad in addition to fueling regional economic growth.

Much as Vice President Joseph R. Biden Jr. has been advocating rail development in the United States, China’s second-ranking official, Premier Li Keqiang, has made Chinese high-speed rail technology central to diplomatic efforts. Over the past year, Mr. Li, dubbed “China’s super salesman” by the state new media, has successfully promoted railway cooperation between his country and Thailand; led 16 Central and Eastern European leaders to a Chinese rail exhibition featuring a 21-meter, 0r 70-foot, model train; and told African leaders that China is ready to help build a network of high-speed rail on their continent.

Still, the rapid development of high-speed rail in China, often with lax oversight, has not been without problems, including corruption, cost overruns and deadly accidents. The former railway minister, Liu Zhijun, who made high-speed rail his pet project, was dismissed in 2011 for corruption and in 2013 was given a suspended death sentence.

After Mr. Liu’s downfall, the Ministry of Railways was dismantled and its regulatory and business components separated.

In a visit last Friday to the headquarters of its successor, the China Railway Corporation, Mr. Li called for more private financing of the rail system. The corporation’s investment target for the coming year is 800 billion renminbi, or $130 billion, and it aims to put more than 4,100 miles of new lines into operation.
Newer Post Older Post Home