Have Americans really fallen out of love with driving?

Heavy traffic at rush hour on the Interstate 10 Freeway in Los Angeles, California

The number of miles Americans are driving has remained stagnant over the past several years. Is this the end of American car culture?


The American consumer has come a long way since the depths of the Great Recession.
The unemployment rate has fallen from a high of 10.1% to 6.2% today, while many Americans have used the recession and recovery as an opportunity to pay down (or walk away from) household debt. And as you can see from the chart below, consumer spending has continued to rise at a steady pace except for a small blip during the worst of the recession: 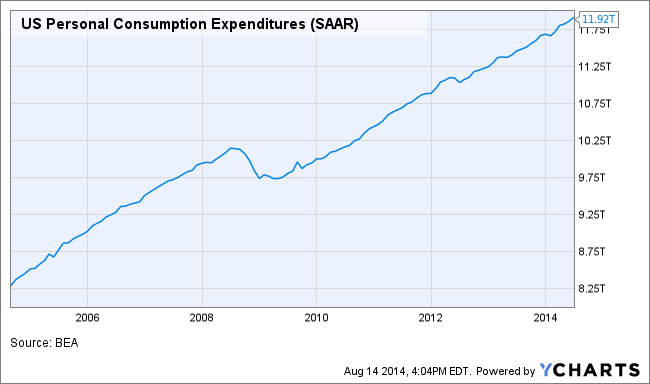 Of course, it’s not surprising that consumer spending has continued to rise. With a growing population, economy, and even moderate inflation, it’s expected that American consumers will spend more tomorrow than they do today. Most economic metrics, for these reasons, tend to grow over time. That’s why it’s so surprising that one statistic—miles driven—has been stagnant for almost seven years:

The only other time in history that we’ve seen a similarly long time between the peak and trough was following the 1982 recession, in which it took 39 months for total vehicle miles traveled to recover to its previous peak. It’s now been more than twice that amount of time since we reached the all-time high in vehicle miles driven, and unlike the case in the 1980s, we don’t have the excuse of a recent gas-tax hike to blame for it.

So, what is going on here? In a note to clients Thursday, independent research firm Behind the Numbers argued that we’re entering a new era in which Americans simply prefer to drive less. They write:

It’s unlikely that miles driven is a lagging indicator that will eventually return to its prior trend. There is ample evidence that a 60-year trend of increased per capita driving has ended…. Among the reasons a sharp reversal is unlikely:

As a result, Behind the Numbers asks whether we should be skeptical of the future success of companies like Goodyear Tire GT 0.32% , as its sales are directly related to American driving. And lo, Goodyear’s tire sales have performed poorly:

BTN wonders whether we should be worried about other companies too, like the big auto makers, or even retailers, as Americans gravitate towards driving less and sticking with public transportation. But it’s also a good idea to ask whether this trend towards driving less is as permanent as some commentators think.

While it’s true that Baby Boomers are aging and will continue to drive less throughout their lives, the argument that there have been significant changes to the economy and culture that will cause Millennials to drive less warrants a bit of examination. First off, the claim that gas prices are higher now than they’ve been in the past is just not true. Here’s a chart from economist Ed Dolan, which shows that fuel prices per hour worked is far lower than in the mid-1990s, when miles driven figures were still on an upward trajectory:

Second of all, the trend of Americans moving to the “urban core” seems to be slowing. While it’s true that urban areas have been growing faster than the suburbs over the last decade or so, it looks as if that trend may be starting to reverse its course. Big cities like New York and San Francisco, which have the sort of public transportation networks that enable people to go without a car, are running into fierce opposition against further development. And in some of the faster growing cities in America, like Dallas or Seattle, living without a car is still a hassle. It’s possible that the political obstacles to denser living in America will be overcome, but it’s no sure thing.

Finally, while Millennials are now America’s largest demographic group, we have yet to really feel their presence in the economy. The single most common age in America today is 23, an age where it’s much easier to get by living in a city without a car. As Millennials start to settle down, get married, and have children, it’s quite possible that their relative aversion to suburban life and cars will soften a bit.

There’s plenty of reason to believe that America’s love affair with the car is beginning to cool, but it’s probably a bit early to declare this case closed.
Newer Post Older Post Home