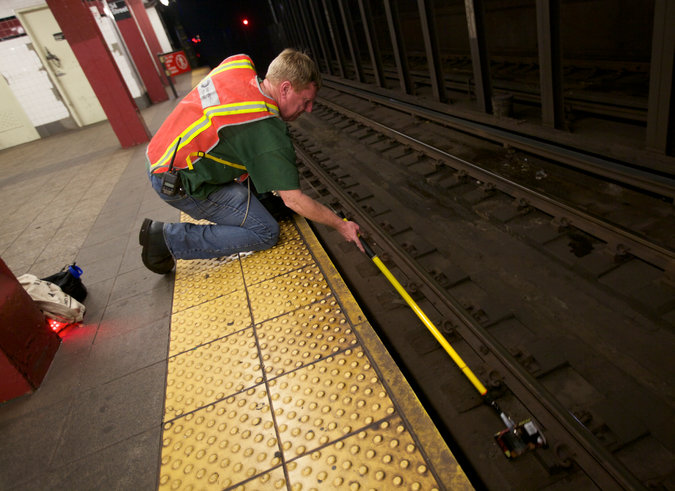 
The requests trickle through the bowels of the New York City subway system, funneled to workers more accustomed to calls about tunnel fires or ceiling leaks.

A problem is reported at Columbus Circle one recent afternoon. A passenger could be in great distress. Delays are minimal, but movement on the tracks has perhaps never been slower.

So would a crew mind collecting its helmets and hauling its mechanical claw to rescue the turtle — fumbled by a rider — currently plotting its very methodical getaway from Midtown train traffic?

“It’s a big city,” a transit worker, Vinny Mangia, had said a day earlier, reciting a mantra of his office. “Somebody’s going to drop something.”

And somebody, if the item is sufficiently treasured, is going to try to pick it up. These are the fishermen of the subway system, cobbling together homemade instruments to pluck items from the tracks and release them to a grateful city.

Workers have returned a bag of hospital-bound blood and corralled a collection of artificial body parts, scooped engagement rings from the rails and reunited children with stuffed animals.
They have lifted bikes and basketballs.

One worker, Bob Devine, recently recovered the detritus of a lover’s quarrel: a bag of clothes hurled beside a third rail in the Bronx during an argument.

For as long as there have been subway tracks, New Yorkers — haggard, perpetually busy and forever jostling for space — have been dropping things on them.

But in recent years, the workers say, the rigors of the job have multiplied, with smartphone proliferation and in-station Wi-Fi producing a more distracted ridership and sending more phones tumbling to the tracks.

Indeed, the pickup crews, which also perform track work and respond to emergencies when necessary, are afforded a unique window on consumer behavior.

Workers can trace trends in accessories — changes in the price of gold have coincided with a decrease in calls about jewelry, they say — and gauge the relative popularity of new authors.

They can pinpoint the moment the iPhone surpassed the BlackBerry, and they predict, by now with near certainty, that travelers are most likely to drop either device on a Monday. “People are going back to work, they’re annoyed, they’re fumbling around,” Mr. Mangia said, by way of explanation.

Other transit agencies appear less zealous in their approach. In Boston’s transit system, there is no team dedicated to retrieving dropped objects, though crews who walk the tracks overnight often pick up items on their own. In Chicago — where workers “do not use any device” like the mechanical claw, a spokeswoman said — operators on stopped trains occasionally descend from their posts to retrieve wallets or phones.

Most New York travelers appear pleased with the vigilance and, often, enthralled by the claw: the long-limbed fusion of an extendable paint stick, a grocery grabber and, in Mr. Devine’s case, an old token bag to protect the gadget from the elements.

On a recent weekday at the West Fourth Street station, Mr. Devine and his team partner for the day, Leonard Geraghty, tracked down the wheel of a sliding door, which Bart Platteau, from Harlem, had fumbled on the way to a hardware store for repairs.
“Yes!” the rider shouted, as Mr. Devine lifted his tool from the tracks.

Mr. Platteau inspected the wheel for a moment. “Great service,” he said before leaving.

Next, the team traveled to 34th Street, where a book was propped against a rail.

“ ‘War and Peace,’ ” Mr. Geraghty guessed, training his flashlight below. In fact, it was a novel called “Gunz and Roses.”

In some cases, including the turtle rescue, other transit personnel help recover items before workers like Mr. Devine and Mr. Geraghty arrive. (The transportation authority described the reptile as “large,” reporting that it fell out of a brown paper bag. The woman carrying the bag stayed behind until the turtle was lifted to safety.)

A recent change by the Metropolitan Transportation Authority, charging $1 for new MetroCards, has made the workers’ searches more manageable, coaxing many riders to refill their cards rather than piling them on the tracks.

But scheming travelers, spotting a pickup crew, occasionally claim cards or other items that are not theirs.

Sometimes, ownership is more obvious. Travelers balancing on one leg, for instance, tend to be responsible for reports about lost shoes. Then there was the No. 6 rider who lost both at East 59th Street, Mr. Devine recalled, and $40, too.

When the bills landed on the tracks, she tossed a flip-flop in their direction, hoping to pin them down. She missed. But her second attempt landed.

“I thought it was pretty smart,” Mr. Devine said.

Mr. Geraghty cited a run-in at Atlantic Avenue in Brooklyn, about four years ago, as his most memorable. He recovered a glass eye — “brown,” he said — and returned it to its owner. The man wiped it off and pressed it back into place. Upon hearing this tale, Mr. Devine countered with a memory about a set of false teeth.

There is the occasional aggrieved passenger, chafing at the response time if a crew is traveling from another call at a far-off station. But almost universally, riders are appreciative. A few have tried to tip the workers, though they say they have never accepted.

“A little hug, we take,” Mr. Geraghty said. “I usually tell them, if it’s a man: ‘Take your wife out. Have a good time on us.’ ”
Newer Post Older Post Home