The trouble with toll roads in Texas 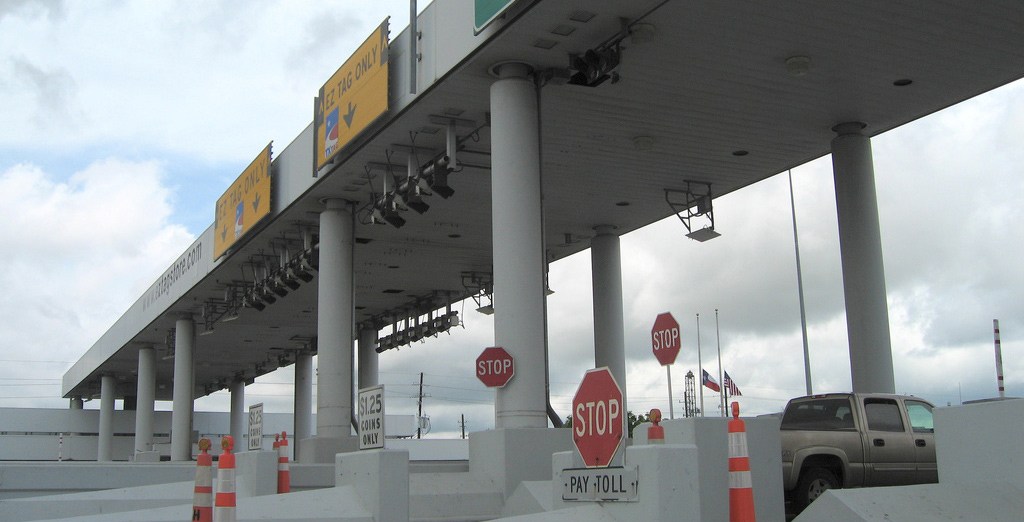 A Texas Transportation Institute study released last month found that from a list of 15 potential ways to improve transportation in the state, building more toll roads was by far the least popular option. Over 1,000 citizens reportedly filled a public meeting last month in Rockwall to show opposition to a private tollway.

Ideally, Texas would only introduce tolls on roads when they’re the best way to collect needed transportation revenue. In states like Colorado and Virginia, toll rates are adjusted to encourage drivers to avoid rush hour and carpool more. London charges visitors who drive downtown a fee that keeps streets unclogged. These systems create public benefits that can outweigh any drawbacks.
But unfortunately, especially in Texas, tolls tend to be introduced for the wrong reasons. When elected leaders aren’t willing to fix major transportation funding problems, tolling can appear to create money out of thin air while actually wasting tax dollars and leading to poor decisions about what transportation projects to build and how to manage them.

The chief reason most toll projects get built is because the money used to build them is “off budget,” meaning it doesn’t appear on the state’s budget and revenue doesn’t come from general taxes. Politicians want to build new public works, repair infrastructure and get their picture taken at ribbon cuttings, but they also fear losing their jobs if they propose raising taxes to pay for these things. Texas lawmakers last session passed legislation that, if approved by voters in November, is expected to redirect billions of dollars over the next decade from the state’s Rainy Day Fund for transportation. But it won’t come close to fixing budget shortfalls.

Tolling raises revenue from the public akin to taxes or fees but uses off-budget private concessions or quasi-public agencies to collect the money and borrow against future tolls. The borrowing doesn’t count as public debt, and thus the costs seem to disappear, especially when public-private partnerships act as a middleman. It’s government accounting fiction. In reality, the private costs of financing toll roads are far more expensive than the rock-bottom interest rates the state pays when issuing tax-free public bonds.

This means lost dollars for other priorities — such as repairing Texas’ 52,000 structurally deficient bridges, investing in public transit or bike lanes, or improving roadways in places where drivers have less income to pay tolls.

Tollways in Texas also often fail to attract forecasted levels of traffic. Since the turn of the century, Texans have cut their driving miles by almost 13 percent while transit ridership is on the rise, yet the state continues to push for building unnecessary toll roads like the Dallas Trinity Parkway.
Proponents of new toll roads like to talk about introducing more choices, but toll roads often foreclose choices and impose harms. They steer future growth and traffic to and from particular places, leaving taxpayers to pay for infrastructure to accommodate that growth. New roads create pollution and require vast quantities of land for public rights of way.

Tolling can even introduce inefficiencies and public harms that wouldn’t arise from other highways. Though more efficient than collecting coins, electronic tolling still requires billing, enforcement, data protection and call centers that wouldn’t otherwise be necessary. Tolls inevitably discourage some people from using the most direct or efficient route. Studies have shown that many drivers will opt for less-efficient local roads that aren’t prepared for the traffic. Truckers are particularly sensitive to toll hikes, and diverting them onto local roads can create safety, pollution and road maintenance problems.

And these problems can be magnified when a private company operates a toll road. Private toll operators seek to maximize profits rather than public benefits. They typically seek to safeguard future toll revenue by requiring decades-long contracts that limit the public’s ability to adapt to unanticipated needs and technological opportunities. Private toll contracts reduce public transparency by, for instance, declaring basic information about their operations “proprietary business information.”

Instead of treating tolling as free money, politicians should weigh tolls against alternative ways of funding transportation. They must ensure that the money the public would pay in tolls and other potential harms get full consideration.