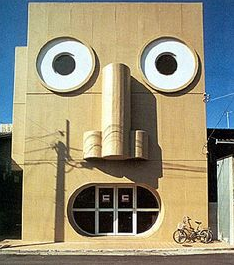 In a more perfect universe a small city such as Sierra Madre would be able to chart its own course. Be it the density of the community, the design of buildings already built or about to be built, or the amount of taxes we choose to pay.

And since it is our town, and our home as well, shouldn't we be allowed to decide how we want to run it, how things should look, and what taxes we would have to pay in order to make the magic happen?

Alas, that is not quite how things work in California anymore. Here we are told we must accommodate centralized state development schemes because Sacramento demands it. We're also told this is one of the ways the world will somehow be saved from global warming, and that if people are coerced into living in highly dense transit corridor communities they will use their cars less, and therefore will not produce as much in greenhouse gas emissions.

Rather than commuting to job centers from supposedly remote single family homes, and in convenient personal transportation, we'll stay put and not move around quite so much. And when we do, we'll take the bus.

Here is how a website called Sustainable Communities describes some of the consequences of SB 375, the state law that removes the rights of towns like ours to control local development (link):

Imposed Development - Housing elements have long been a source of controversy and contention. Cities often bristle at orders imposed on them about how to accommodate growth. With SB 375 adding more coordinated oversight of local planning, cities and counties have reason to anticipate even greater centralized control and restrictions when it comes to planning their future.

SB 375 mandates that cities must complete zoning changes to meet the RHNA within three years of the date when the city receives final comments on its housing element from HCD. The new law includes penalty provisions for governments that do not comply, including prohibiting the local government from denying or putting conditions on development projects with at least 49% of units for very low- to moderate-income families. If a local government does deny or put conditions on such a project, the applicant can sue the city. In addition, anyone may file suit against a government that has failed to rezone by the deadline. Cities that file an inadequate or late housing element update could also be subject to a four-year review cycle instead of eight years.

A state law that helps developers sue towns like Sierra Madre over planning. Wow. Like that was necessary.

The reality is greenhouse gas emitting flivvers are going the way of the dinosaur, and fairly soon. Within the next two decades the personal transportation industry (Sacramento generally dislikes industries and often successfully discourages them from operating here) will reach a tipping point and mostly sell emissions-free transportation, which will solve this problem once and for all.

And all of those lumpen SCAGvilles and tacky Faux Pasadenas that dot the 210 Freeway and Gold Line corridors will sit largely ignored and uninhabited as we the people happily speed by in clean green personal automotive transportation. Well on our merry way to the bucolic locales and highly desirable single family homes the haters in our state capital decry as "sprawl."

Centrally controlled development planning in California is a direct product of what is widely regarded to be one of the most corrupt state governments in the United States (link). In this our one party de-evolutionary state most everything of value is sold off to lobbyists and anyone else who is willing to pay to play. The temple of government here is not just lousy with money-changers, it is practically all you will find there.

And one of the largest and most lucrative prizes up for sale is development.

Sacramento law now demands that little cities such as ours accommodate more and more densely settled infill housing, and even though this town is largely built-out, their lust for money trumps all. The state basically confiscated and then sold our rights to plan and develop our town as we see fit to various construction, development and Realty interests for nothing more than money. Cold hard campaign cash to be exact.

Where else would the likes of Chris "Gold Line" Holden have gotten his otherwise unproductive mitts on the $199,000 dollars required to buy his Assembly Majority Whip seat? Even though he'd only been in Sacramento for several months? Check our this little piece of wildly inappropriate political behavior by clicking here. Everything is for sale, even legislative offices.

So how does all of this fit into a discussion about updating Sierra Madre's General Plan? The answer is that these are the dark forces driving so much of what we are required by state law to accommodate and enable with this all-important document. In other words, in order to meet the lobbyist driven mandates of our corrupt state government, we need to incorporate a large level of vulnerability to over-development into what is ostensibly the twenty year blue print of our community.

Here is how our compliant city government expresses this in the agenda report for tomorrow's special City Council meeting on the General Plan. Language that, by the way, is about as opaque and meaningless as bureaucratic minds are capable of producing. 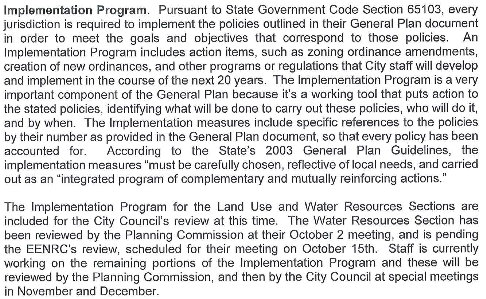 If anyone can tell me what City Hall is telling us with phrases like "integrated program of complementary and mutually reinforcing actions" I'll send you a tin of warm cookies. My guess is it means abjectly complying with everything the state tells us to do, and without giving them guff about it. Otherwise they'll take away some grants, or legally assist developers hoping to profit by suing us.

What this is really all about is development, of course. Check it out:

And then there is this little piece of prime bunkum:

If your really want to promote (not encourage) sustainability (and we are still waiting for the EENERs to define what that rather loaded term actually means), you don't build 87,392 square feet of new development in Sierra Madre. A town that is already packed out well beyond its natural limits, and doesn't even have the water required to service the houses we already have.

Here so-called "green development" is an oxymoron. The absurd notion that somehow dense pack development can be green is about as Orwellian a concept as you can find anywhere.

If you want to be truly green, then don't cram 181 new houses into a three square mile community that has no room for them.

Then again, how do you sell unpopular and frankly destructive things in California? You tell people it has to be done in order to "save the world." Apparently there is a near limitless supply of post-cosmic people in this state, and they're herbally lobotomized enough to believe it.

Perhaps it is the little green leaf pictures that gets 'em.

Fortunately, there was this rugged band of wise and courageous individuals on the General Plan Update Steering Committee. Folks that worked very hard to get as many pro-Sierra Madre advantages cooked into the General Plan as they legally could. This despite the near constant meddling of the City Manager, Mayors Josh Moran and Nancy "We will take you out" Walsh, plus the multiple consultants they demanded we hire. And at extraordinary expense to the taxpayers, I might add.

The Planning Commission has now backed up the many accomplishments of the General Plan Update Steering Committee, and even contributed a few wise additions of their own. Some of them quite good I might add.

Now this all goes to the City Council for them to chew over. You will need to keep an eye on them I'm afraid. I am not certain that all of our elected officials can be completely trusted.

Especially the one's utterly dependent upon the City Manager for clues about any of this.