A Scourge Is Spreading. M.T.A.’s Cure? Dude, Close Your Legs.

It is the bane of many female subway riders. It is a scourge tracked on blogs and on Twitter.
And it has a name almost as distasteful as the practice itself.

It is manspreading, the lay-it-all-out sitting style that more than a few men see as their inalienable underground right.

Now passengers who consider such inelegant male posture as infringing on their sensibilities — not to mention their share of subway space — have a new ally: the Metropolitan Transportation Authority.

Taking on manspreading for the first time, the authority is set to unveil public service ads that encourage men to share a little less of themselves in the city’s ever-crowded subways cars.

The targets of the campaign, those men who spread their legs wide, into a sort of V-shaped slouch, effectively occupying two, sometimes even three, seats are not hard to find. Whether they will heed the new ads is another question.

Riding the F train from Brooklyn to Manhattan on a recent afternoon, Fabio Panceiro, 20, was unapologetic about sitting with his legs spread apart. 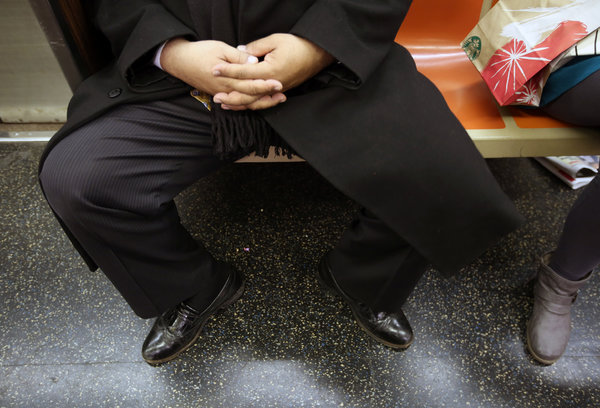 Manspreading in action. The Metropolitan Transportation Authority will address the practice as part a new ad campaign.

And what if Mr. Panceiro, an administrative assistant from Los Angeles, saw posters on the train asking him to close his legs? “I’d just laugh at the ad and hope that someone graffitis over it,” he said.
For Ke
lley Rae O’Donnell, an actress who confronts manspreaders and tweets photos of them, her solitary shaming campaign now has the high-powered help of the transportation authority, whose ads will be plastered inside subway cars.

“It drives me crazy,” she said of men who spread their legs. “I find myself glaring at them because it just seems so inconsiderate in this really crowded city.”

When Ms. O’Donnell, who lives in Brooklyn and is in her 30s, asks men to move, she said, they rarely seem chastened: “I usually get grumbling or a complete refusal.” 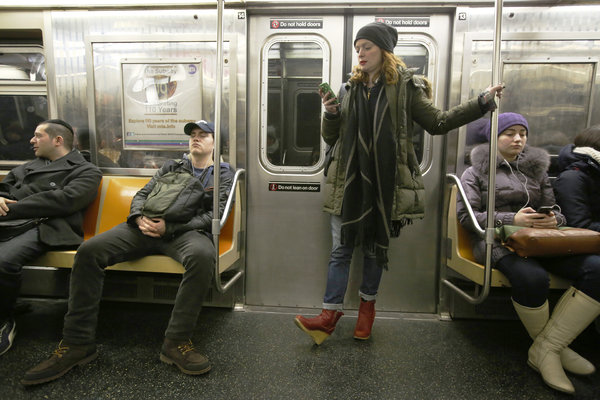 Kelley Rae O’Donnell, who confronts manspreaders and posts their photos online, captured an image of one on a train this month.

The new ads — aimed at curbing rude behavior like manspreading and wearing large backpacks on crowded trains — are set to go up in the subways next month. They will all carry the slogan, “Courtesy Counts: Manners Make a Better Ride.”
One of the posters is likely to be especially welcome to women — as well as to men who frown on manspreading: “Dude... Stop the Spread, Please” reads the caption next to an image of riders forced to stand as a man nearby sits so that he takes up two seats.

The campaign is the latest in a long line of courtesy-themed crusades by the authority going back to at least the 1940s. One such ad urged women annoyed by impolite male riders to, “Hit Him Again Lady, We Don’t Like Door-Blockers Either.”

The new ads come as more riders are crowding onto the subways than at any time in recent history. In 2014, the system logged as many as 6.1 million riders on a single day, up from just under 5.1 million riders on the busiest day a decade ago. The city’s population, meanwhile, has swelled to more than 8.4 million people, pushing everyone closer and closer.

With crime no longer rampant on the subway, the campaign is the latest sign that other unwelcome behavior is getting attention. 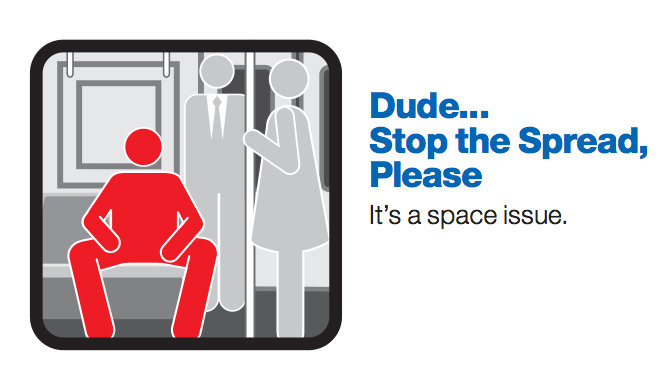 A poster taking aim at the practice of manspreading is part of a new civility-themed campaign by the Metropolitan Transportation Authority.

Several blogs regularly highlight instances of manspreading where knees stretch several feet apart. On some sites, images of large objects like the Death Star from “Star Wars” have been added with Photoshop into the space between the splayed legs. While there are women who take up more than their share of space, the offenders are usually men.

One admitted manspreader, John Hubbard, sat with his legs wide apart on an F train as it traveled through Manhattan recently.

“It’s more comfortable,” he said with a shrug.

Mr. Hubbard, 45, an engineer who lives in New Jersey, said he might move his leg, but not for just anyone. For an older person, he would. And for an attractive woman, he said, he definitely would.

Sherod Luscombe shook his head when he saw two men sitting with their legs spread on another train, taking up three seats between them. Mr. Luscombe, 58, a clinical social worker, said he thought the men should move, but he was not about to confront them. 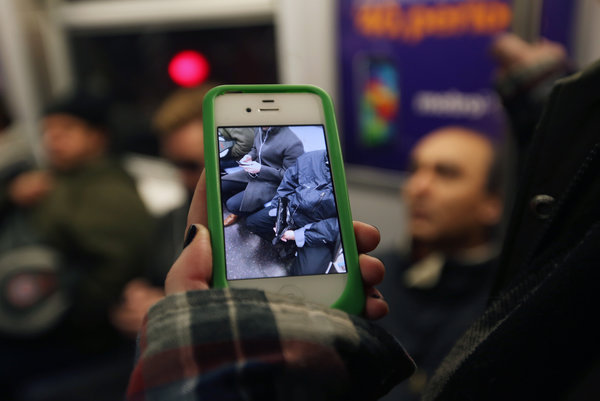 Ms. O’Donnell has little trouble finding subjects to photograph as part of her campaign.


“I’m not going to say, ‘Bro, there is a lady standing up right there. Cross your legs, young man,’ ” he said.

Women have theories about why some men sit this way. Some believe it is just a matter of comfort and may not even be intentional. Others consider it an assertion of power, or worse.

Bridget Ellsworth, a 28-year-old music teacher, views manspreading as sexual harassment because some men engage in it near her even when the subway car is not packed.

“They could move over and spread out their legs all they want,” she said, “but they’re squeezing next to me and doing it.”

For men who think that sitting with their legs spread is socially acceptable, manners experts say it is not. Peter Post, the author of the book “Essential Manners for Men” and great-grandson of etiquette guru Emily Post, said the proper way for men to sit is with their legs parallel rather than in a V-shape.
“I’m baffled by people who do that kind of thing, who take other people’s space,” he said.
Olof Hansson, a director of the Manhattan men’s spa John Allan’s, put it more succinctly. “A true gentleman doesn’t sit on the subway, he stands.”

As for men who may worry that crossing their legs could hurt their virility, doctors say there is nothing to fear. A half-hour train ride with legs crossed might raise testicular temperatures, but not long enough to do any harm, said Dr. Marc Goldstein, director of the center for male reproductive medicine and microsurgery at NewYork-Presbyterian Hospital Weill Cornell Medical Center.
Philadelphia has a new etiquette campaign, too, with posters that say, “Dude It’s Rude... Two Seats — Really?”

But Kristin Geiger, a spokeswoman for the Southeastern Pennsylvania Transportation Authority, said the campaign in the City of Brotherly Love is aimed at passengers with bags on seats, not people spreading their legs too far apart. Manspreading, she said, may be a “localized” problem in New York. “I don’t know of any complaints that have come through customer service about manspreading,” she said. Transit officials in Chicago and Washington said the phenomenon is not a major concern for riders in those cities either.

In New York, the transportation authority went back and forth about what tone to take when tackling the topic, said Paul Fleuranges, the authority’s senior director for corporate and internal communications. Officials knew it could be ripe for parody on late night television and did not want their approach to be too snarky. But Mr. Fleuranges said he knew that the ads had to speak directly to the spreaders.

“I had them add the dude part,” he said, “because I think, ‘Dude, really?’ "
Newer Post Older Post Home