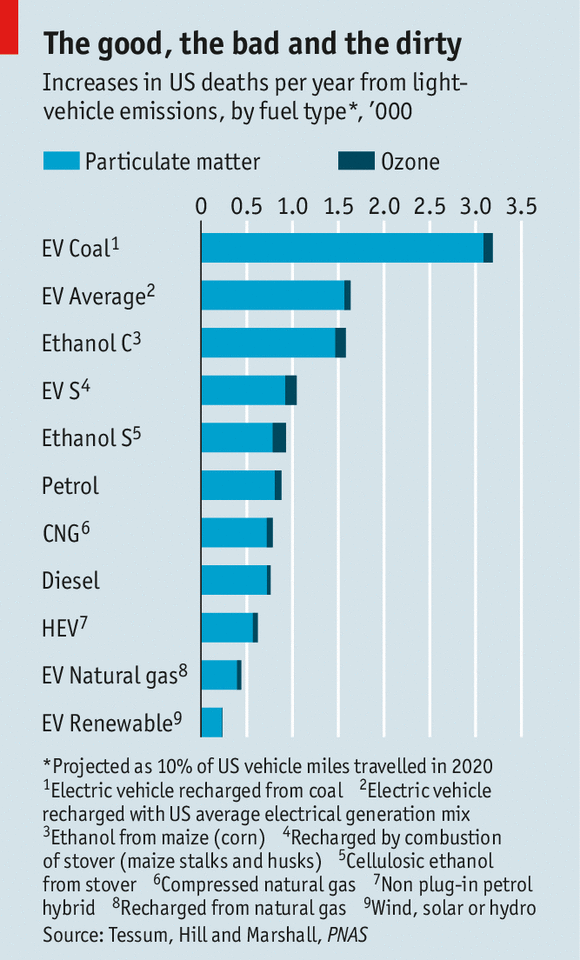 DRIVING an electric car confers a badge of greenery, or so the marketing departments of their makers would have you believe. Yet a report which analyses the life cycle of car emissions (ie, all the way from those created by the mining of materials for batteries, via the ones from the production of fuel and the generation of electricity, to the muck that actually comes out of the exhaust) presents a rather different picture. A battery-powered car recharged with electricity generated by coal-fired power stations, it found, is likely to cause more than three times as many deaths from pollution as a conventional petrol-driven vehicle. Even a battery car running on the average mix of electrical power generated in America is much more hazardous than the conventional alternative.

Christopher Tessum, Jason Hill and Julian Marshall of the University of Minnesota have just published this study in the Proceedings of the National Academy of Sciences. They estimate how levels of fine particulate matter and ground-level ozone—two important constituents of air pollution, which kills more than 100,000 people a year in America—would change if each of 11 ways of powering a car were to be responsible for 10% of the vehicle-miles expected to be driven in America in 2020.

It was no surprise that electric cars whose batteries were topped up from wind, solar or hydroelectric sources came out cleanest, causing 231 putative deaths over the course of a year, compared with 878 for petrol cars. Electric cars recharged with power from natural-gas-fired stations were also a lot less lethal than petrol-driven ones, with 439 deaths. But if those same electric cars were recharged ultimately by coal, they would be responsible, according to the model, for just over 3,000 deaths.

Biofuels also caused more health problems than petrol. But diesel, which is generating concern about pollution in parts of Europe, where it is a more popular fuel than in America, was marginally cleaner than petrol. This is because the Minnesota model assumes for all cars that present and future emission-control technologies will be more widely used in 2020, especially particulate filters which have a marked effect on cleaning diesel exhausts. Diesel cars also have better fuel economy than petrol-driven ones.

Overall, the research shows that electric cars are cleaner than those that rely on internal-combustion engines only if the power used to charge them is also clean. That is hardly a surprise, but the magnitude of the difference is. How green electric cars really are, then, will depend mainly on where they are driven. In France, which obtains more than half its power from nuclear stations, they look like a good bet. In China—which is keen on electric cars, but produces some 80% of its electricity from coal—rather less so.
Newer Post Older Post Home