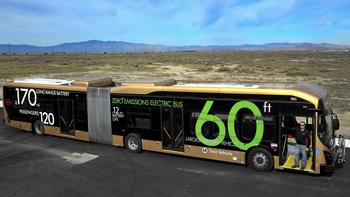 The Lancaster, named after the city where it was built by BYD Motors Inc., is entirely electric and features the accordion-like articulation of L.A.'s extra-long buses.


With a faint hum about as loud as a Toyota Prius, 60 feet of transportation history rounds a corner in a Lancaster parking lot.

"It's an opportunity for there to be a renaissance in public transportation," said James Holtz, fleet sales manager for manufacturer BYD Motors Inc.

The Lancaster bus can hold up to 120 passengers. In tests on Metro's Orange Line, the bus was praised for its smooth ride and quietness by drivers and passengers, said a BYD Motors Inc. official.
The bus runs on eight lithium iron phosphate battery modules, four to a side, that provide enough charge for more than 170 miles, Holtz said. In lab tests, the batteries have a life cycle of about 27 years, about twice the life span of an average bus, he said. The bus can hold up to 120 passengers.

The zero-emission bus, named the Lancaster after its birthplace at the BYD manufacturing facility, was unveiled in October at the American Public Transportation Assn. Expo in Houston. Its next big appearance was on the Orange Line, whereHoltz said the bus was praised for its quietness.
Electric buses themselves are not so uncommon. Cities around the country already run these types of buses, including San Antonio, Pomona and the Tri-Cities area in Washington state. Stanford University also operates a 40-foot bus, which was BYD's first U.S. electric bus order. But none of those electric buses bear the accordion-like articulation of L.A.'s extra-long bus.

The Los Angeles County Metropolitan Transportation Authority has submitted an order for 25 of BYD's 40-foot electric buses, said Brendan Riley, vice president of sales for BYD Motors Inc. But it has not ordered the articulated electric one, which is still being shown around several cities.

Gary Spivack, division transportation manager for Metro, said the testing of the articulated electric bus was positive; operators enjoyed driving the bus based on the smooth ride and quiet inside, and passengers enjoyed being in the bus, he said.

He said Metro hasn't made up its mind about ordering the 60-foot bus, saying range is a paramount issue when it comes to any electric bus.

"We need something that goes 250 miles a day," Spivack said.

BYD plans to take the Lancaster up and down the state, from the Bay Area to San Diego, and up the coast, to Portland and areas of Washington, to showcase it, Holtz said. Ultimately, the bus will go to Altoona, Pa., for testing.

BYD might be new to the bus manufacturing game in the U.S., but in China, where BYD is headquartered, it has been manufacturing cars for 11 years and buses for at least 5, Holtz said.

The company got its start in battery manufacturing, and produces about 30-40% of the world's cellphone batteries, Holtz said.

Back in Lancaster, bus operator Peter Balian starts the vehicle with the push of a button and drives around the parking lot of the manufacturing facility. He's only been driving buses for eight months, but he said his previous work driving a tow truck, as well as working at Metrolink, made the transition relatively easy.

"It has a lot of power," he said, "and it grabs a lot of attention."
Newer Post Older Post Home