The case for tearing down urban freeways 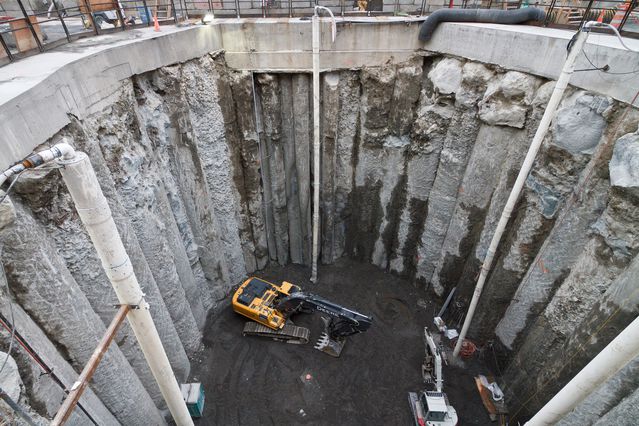 Seattle and Washington state are pouring millions of dollars into this pit.


Back in the 1950s, the nation's transportation planners had a bad idea. They tore down buildings along urban waterfronts — which in many cities were right downtown — to make room for freeways that would help mostly-suburban drivers get around more quickly.

Now, a half-century later, many of these freeways are falling apart. Transportation planners have to decide whether to rebuild them. But in many cities, replacing them with ordinary surface streets is a better bet.

Cities work best when people can easily walk from one place to another. But freeways aren't pedestrian-friendly, so they can cut different parts of the city off from one another. The noise and pollution tends to depress property values near the freeway, leading to under-development. And freeways that run along the waterfront represent a huge missed opportunity, because it's not nearly as nice to spend time on the waterfront if you're in the shadow of a freeway.

Workers construct part of the SR-99 tunnel in November. (WSDOT)

Right now, Seattle is trying to replace one of its elevated freeways with a tunnel, and it's not going well. The Alaskan Way Viaduct is an elevated freeway that cuts downtown Seattle off from the city's waterfront. It's in a bad state of disrepair and needs to be replaced. A few years ago, city officials had to decide whether to rebuild it, replace it with an expensive tunnel, or convert it into an ordinary boulevard.

As David Roberts explains, city and state officials went with the tunnel option — despite warnings from experts that the project could turn into a boondoggle. The results haven't been pretty. The tunnel-boring machine got stuck last year, and engineers are now digging a giant hole to try to reach the machine and perform repairs. As they pump water out of the hole, they seem to be damaging the foundations of surrounding buildings.

Politicians in Seattle and Washington State are spending billions of dollars on this project because they believe the city's streets will be clogged with traffic if they simply scrapped the freeway. But that's not necessarily true. When a city tears down an urban freeway, some cars will be diverted to other roads. But many other drivers will respond to the lower capacity in other ways.

Some will shift to taking transit to work. Others will shift their commutes earlier or later in the day to avoid periods of peak congestion. Still others will move closer to downtown, or take jobs that are closer to where they work.

So taking out an urban freeway won't generate as much traffic on other roads as naive projections might suggest. Moreover, for the last couple of decades, transportation planners have consistently overestimated the amount people would be driving.

The benefits of freeway removal

The destruction of the Embarcadero Freeway aided the revitalization of the neighborhood.

Meanwhile, demolishing freeways and replacing them with surface streets have large benefits for people who live nearby. In Seattle, it would make the city's waterfront more attractive to people downtown, raising property values and increasing economic activity there.

Philadelphia has a similarly damaging freeway cutting Old City Philadelphia off from the Delaware River. Planners are currently discussing building a park over the freeway, but removing the freeway altogether might be a better option. A tangle of freeways cuts downtown St. Louis off from not only its waterfront on the Mississippi but also its famous arch.

Removing freeways has worked in the past. San Francisco's Embarcadero neighborhood blossomed after an elevated freeway there was torn down in the wake of the 1989 earthquake. Portland removed a waterfront freeway in the 1970s. Milwaukee did the same a decade ago.

If Seattle had followed this advice, it wouldn't be literally sinking millions of dollars into a big hole in the ground.