Not that long ago, things like robot vacuum cleaners or self-guided lawn mowers seemed like science fiction. Now, nobody bats an eye at a robot scooting around the living room.

So how long will it be before we're getting around in cars that don't need drivers?
Just a few years, according to Google.

The company has developed a prototype which is apparently now ready for its biggest test: the demands of the city.

Justin Webb, who's with Stateside partner BBC, went for a test drive at Google headquarters, and joined us to describe the experience.

Hit the jump to see what it looks like to be in a driverless car by watching Google's video.

Mayor Eric Garcetti and Sens. Dianne Feintsein and Barbara Boxer on Wednesday plan to announce a $1.25-million federal grant package for the first phase of the nine-mile subway extension.

Funding will also come from a $856-million loan from the Transportation Infrastructure Finance and Innovation Act program.

The transit project plans to add seven stops between the Wilshire/Western and Westwood/Veterans Administration Hospital stations.

Metro released its 2014 Bike Map just in time for Bike Week LA!
This map is small enough to fit in a backpack or pannier, yet it folds out to show Los Angeles County’s bike paths, lanes, routes, cycle tracks, path access points, Metro Rail lines, busways and Metrolink stations, including those with bicycle parking.
Metro collected and mapped information from 88 cities and LA County in order to produce the map. The updated map shows 305 miles of Class 1 bike paths, 835 miles of Class 2 bike lanes, 522 miles of Class 3 bike routes, and a brand new cycle track in Temple City. This represents an increase of 17 percent or 240 total bikeway miles in just two years.
The map differentiates between LA County's Class 1, Class 2, Class 3, and cycle track bikeways by color coding facilities. Class 1 bike paths (green) are separated from streets. Class 2 bike lanes (orange) are striped for one-way travel on streets or highways. Class 3 bike routes (pink) are shared use facilities with motor vehicles and include signage indicating a bike travel route. Cycle Tracks (purple) are on-road or raised facilities physically separated from motor vehicle and pedestrian traffic.
Metro's comprehensive bike maps help people make trips by bicycle by facilitating the discovery of new bikeways and connections to Metro transit. They also aid city planners, engineers and community members to collaborate and close gaps in the network by building bikeways that connect to those of neighboring jurisdictions. Find the new 2014 map online, at bicycle events throughout the year, or submit an online request for a printed map. 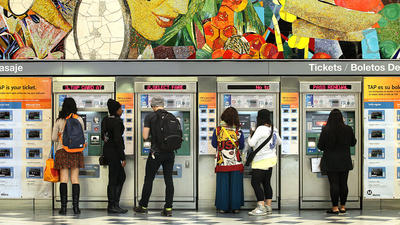 Metro passengers add fares to their ticket cards at the Universal City Red Line station. A proposal that the Metro board will consider Thursday could raise fares as much as 117% over the next eight years.

Citing the financial strain of fare increases on low-income transit riders, a group of Los Angeles County transportation official
s have drafted a plan that would temporarily halt a Metro proposal to raise fares on the bus and rail system three times over the next eight years.

At the Los Angeles County Metropolitan Transportation Authority board meeting Thursday, Los Angeles Mayor Eric Garcetti and two other Metro directors will introduce a motion that would allow one fare increase this summer, according to a copy of the proposal obtained by the Los Angeles Times. Two subsequent increases that would take effect in 2017 and 2020, as well as any increases to student fares, would be put on hold until a panel of transportation experts could assess Metro's financial situation.

The proposal, sponsored by Garcetti and Los Angeles County Supervisors Zev Yaroslavsky and Mark Ridley-Thomas, says the Metro board should be "satisfied that a range of options ... have been evaluated" before scheduling three fare increases at once.

Metro's board of directors will consider two options for fare increases, as well as the new proposal, at their meeting in downtown Los Angeles.

Metro has said a fare increase is necessary to close an expected $36-million gap in the agency's 2016 operating budget. The agency's financial analysts say the deficit could grow to $225 million over the next decade. Without higher fares, the agency has said, Metro will consider laying off nearly 1,000 employees and cutting 1 million hours of bus and rail service in 2015.

Rider advocates have criticized Metro for a policy that they say would disproportionately harm the county's poorest residents. More than 80% of bus and rail riders are minorities, and their average household income is less than $20,000, according to Metro data. Metro's fares are some of the lowest of any major transit system in the United States.

Riders who buy daily, weekly and monthly passes would see the biggest increase in price: The monthly unlimited pass, now $75, would be eliminated in 2018 and merged with a pass that allows unlimited rides on all Los Angeles County bus systems. The price would eventually rise to either $135 or $180.

Both proposals would modify the agency's transfer policy, allowing passengers 90 minutes of unlimited rides. Currently, passengers must pay a new fare every time they board a new bus or train.

The motion by Garcetti, Ridley-Thomas and Yaroslavsky asks for a panel made up of representatives from the American Public Transportation Assn. and officials from "similar, large transit authorities."

The panel would report back next year on a variety of revenue options, including charging for parking at Metro stations and linking the price of bus and rail fares to the Consumer Price Index. It would study changing the fare structure for seven-day and 30-day passes.

The proposed motion would create a Metro riders representative who would "serve as an independent advocate to monitor and assess customer service-related issues" and evaluate future fare-structuring ideas.

It would also require agency officials to study ways to "decriminalize youth fare evasion on Metro's system," including changes to diversion policies or the California Penal Code.