7 Design Lessons From the World's Most Gorgeous BRT Stations

Ideas that help distinguish the service from a regular old bus.

A BRT station in Johannesburg puts U.S. counterparts to shame.

The United States has a lot to learn about quality bus-rapid transit, and great station design is toward the top of that lesson plan. Take the Orange Line BRT in Los Angeles—one of America's highest-rated BRT systems, earning a bronze rating from the Institute for Transportation and Development Policy. It's not that Orange Line stations like the one below are unattractive for bus stops. It's just that they still inspire comparisons with bus stops.

Here's the problem: a slightly better bus stop reinforces the false idea that BRT is just a slightly better bus, when in fact it's really a mode unto itself, and a vastly superior one when done right. There's a reason ITDP sees nice stations as "one of the main distinguishing features" between BRT and standard buses. In the absence of such distinctions, the result can be instinctual resistance to BRT adoption.

Great stations certainly can't make up for poor service, but they do hold the power to enhance good service. Riders perceive wait times to be shorter in bus shelters compared with simpler stops, they're willing to walk a bit farther to reach a nicer train station, and they altogether avoid stations they consider unsafe. Add to these insights the developer confidence that comes with attractive fixed transit and you have a strong case for nice stations to be part of any true BRT plan.
So with guidance from ITDP, we identified some of the world's most impressive BRT stations as well as seven design lessons for U.S. cities to keep in mind.

Graduate from stop to station. American cities won't bat an eye at paying billions for a train station—see: the new World Trade Center PATH hub—but the idea of doing the same for a bus would be laughable. Yet elsewhere around the world, top architects design sharp BRT stations worthy of public pride. Seeing BRT stations (below, a new TransOeste station in Rio de Janeiro) as something more than a standard bus stop can be a big step toward a new transit mindset.


Craft a distinct style. It's Transit Branding 101: the more distinctive a station's design, the more memorable that system becomes. (You know what the Paris Metro entrances look like even if you've never been there.) Johannesburg's Rea Vaya BRT system, for instance, has modern glass stations easily identifiable from the outside and pleasantly light and inviting inside. And since many stations are located downtown, they catch the eyes of even more travelers.


Abide the three W's. ITDP pushes for BRT stations that are wide, well-lit, and weather protected. They suggest building BRT stations at least 10-feet wide and that let in as much light as possible (below, a station in Mexico City's Metrobus system). They should also feel secure, not just from crime but from moving buses, preferably via sliding doors. ITDP also urges very cold or very hot cities to design enclosed structures, removing weather from a rider's equation.


Make boarding better. This one's a BRT basic: passengers should pay their fare off-board and be able to enter the vehicle at platform level via multiple doors. In other words, traveling on a BRT system should feel a lot like traveling on a train. The best BRT stations promote just that experience from fare-payment to boarding (below, the Metroplus system in Medellín, Colombia).


Give real-time updates. Another no-brainer for all public transportation. Real-time transit information (as found at stations on the Lanzhou BRT system in China, below) reduces uncertainty among passengers and improves rider satisfaction as a result. Over the long run there's also evidence that real-time notices can also increase ridership.


Facilitate bike integration. A BRT station that provides bicycle parking becomes more firmly entrenched in the local transit network (below, a bike stand at a Macrobus station in Guadalajara, Mexico). If space is a problem, a fine alternative is to situate the station near bike-share (or vice versa).


Build central stations. Unlike standard bus stops, which are situated along the curb on opposite sides of a street, BRT stations function better in the center. There are practical reasons for this design, the biggest being that it's cheaper to build one nice station per stop than two. But it all comes back to presenting BRT more as a train platform than a bus stand (below, a rendering of a central station in Vientiane, Laos, and a finished one on the HealthLine BRT in Cleveland). 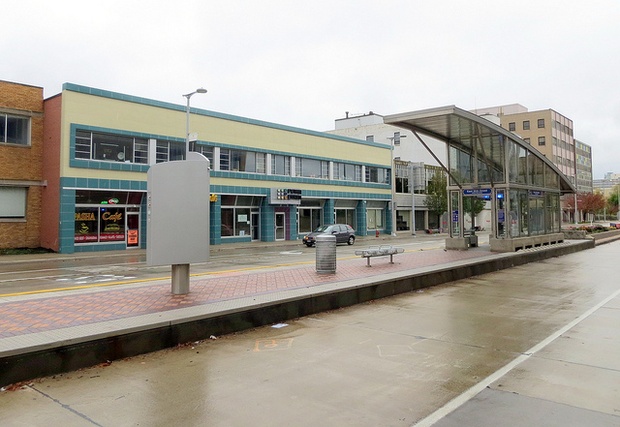