Cheap gas may not lead to drop in transit ridership, experts say 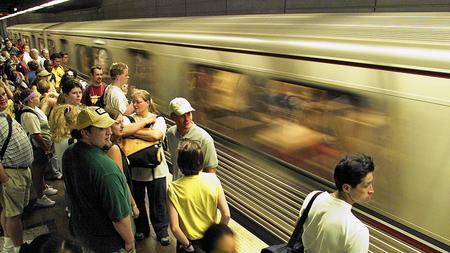 Riders prepare to board the Metro Red Line at the Metro Center Station at 7th and Figueroa streets.The effect of cheap gas on transit hasn’t been studied rigorously.


Since the start of the summer, gasoline prices in Los Angeles County have tumbled 40%, from more than $4 to $2.52, sparking gleeful social media posts and long lines at the cheapest gas stations.

But the enthusiasm is tempered with concern from local transit officials, who say cheap gasoline takes away a key incentive to ride the bus or train in a region where commuting is still overwhelmingly done by car. And in fact, for every month that gas prices declined in 2014, so did the Los Angeles County Metropolitan Transportation Authority's ridership figures. In the second half of the year, the number of riders systemwide fell by 4% compared with 2013.

Gas prices in Southern California dropped 40% since last summer.
But, experts say, don't be fooled: Although there appears to be a connection, correlation is not causation.

It's well documented that transit ridership gets a bump when gas prices soar. If prices at the pump increase by 100%, people drive about 10% less, said Marlon Boarnet, a USC urban planning professor. Some of that decrease in driving leads to higher transit use, but many trips can be done on foot or in a carpool. Other trips can be eliminated.

The effect of cheap gas on transit hasn't been studied as rigorously. Experts say that's because gasoline prices crater so rarely that there aren't many opportunities to dig into the data — and because economists know what to expect.

"Falling gas prices don't lead to much of a decrease in ridership, if any," Boarnet said. "You're looking at zero to two percentage points change, at most."

In Los Angeles, cheap gas alone doesn't make driving affordable for low-income residents, Metro's main customer base. Four in five passengers don't have access to a private vehicle, and more than half of riders live below the federal poverty threshold: $11,670 for one person and $23,850 for a family of four.

"Taking transit versus driving here basically depends on whether you're rich or you're poor," said Jan K. Brueckner, a UC Irvine professor who studies urban economics. "The margin of transit riders affected by lower gas prices is very narrow."

Purchasing, insuring and repairing cars costs far more than filling the tank. Of the estimated $8,835 that the average Los Angeles household spent on transportation in 2012, just 7% went to transit fares and taxis, while 33% went toward gas and 60% toward other vehicle expenses, according to the most recent data available from the U.S. Bureau of Labor Statistics.
If a slim margin of discretionary transit users shift back to their cars, the overall effect on Metro ridership should be minimal. That separates Los Angeles from other major U.S. cities, where subway cars and buses often show a broad cross-section of income and race.

"If you're looking at Chicago, New York or Washington, D.C., this would be a different question," Brueckner said.

At a gas station in Inglewood on Friday, Vanessa Bustillos filled up her Toyota Tundra pickup in preparation for a drive to Northern California for the long weekend. At $65 for a full tank, she paid $20 less than she would have six months ago. "I would have driven anyway," she said. "But it's nice to save some money."

The biggest influence on transit ridership is the health of the economy, experts say. During the Great Recession, as income levels dropped and household budgets tightened, transit ridership hit record highs across the United States. Some of the strongest ridership months in 2008 and 2009 corresponded with low fuel prices.

Metro officials note, with some concern, that as the economy rebounds, more households are buying new cars. In the first 11 months of 2014, Southland residents registered 8% more new cars than in 2013, according to the most recent data from L.A. Times/cars.com.

Any minor shifts in ridership due to lower gas prices won't appear in Metro's ridership figure for several more months, spokesman Marc Littman said, because the agency's ridership estimates are based on a six-month average of data samples taken across all lines in the system.

"When gas prices spike, we don't see ridership gains until several months later," Littman said. "It takes a while for this stuff to percolate through."

It's more likely, experts said, that the fare increase in September led to a temporary drop in ridership while passengers adjusted to higher costs.

This also was the first year that Metro's ridership figures included several months of data from stations where turnstiles are now locked. For a year, ending in June, the agency locked fare gates at 40 of the system's 80 rail stations in an attempt to make it more difficult for riders to board without paying. Analysts say that could lead to fewer people boarding as well.

"You can't pinpoint which single factor causes ridership to decrease," said Dan Nguyen, Metro's deputy executive officer for service performance and scheduling. "But we do need to make an effort to attract new riders and retain the riders we have."
Newer Post Older Post Home