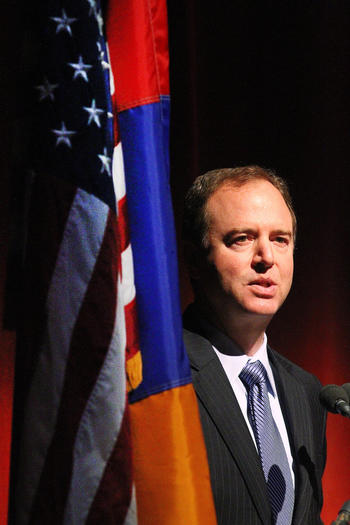 Rep. Adam Schiff (D-Burbank) speaks at the city of Glendale's 13th annual Commemoration of the Armenian Genocide at the Alex Theatre on Thursday, April 24, 2014. This week, Schiff spoke out against a proposal for a high-speed rail system running through an underground tunnel beneath the Angeles National Forest.

Rep. Adam Schiff (D-Burbank) is speaking out against the proposed idea of having high-speed rail tracks run through underground tunnels beneath the Angeles National Forest to connect Palmdale and Burbank and calls the alternative a costly dead-end.

California’s High-Speed Rail Authority plans to study having a section of the rail pass through the southwestern part of the forest — known as the East Corridor — but Schiff said in a statement on Thursday the group should stick to the plan of having rails running alongside the 14 Freeway, an option that he believes would come with a lower price tag.

Los Angeles County Supervisor Michael D. Antonovich has proposed consideration of the route through 35 miles of the Angeles National Forest with 18 to 20 miles of tunneling.

Schiff has worked to preserve the forest and plans to introduce legislation that would preserve the Rim of the Valley and San Gabriel Mountains as part of a new or expanded national recreation area.

“I think the environmental consequences, the public opposition and added cost to the line all makes this a very implausible alternative,” Schiff said in a phone interview on Thursday.

On Tuesday, more than 2,000 people living near the preserve rallied at a church in Lake View Terrace in opposition of a high-speed rail operating close to their homes, the Los Angeles Times reported.

“I think there’s a lack of public input in the process as the meeting the other night made clear,” Schiff said.

He added that he doesn’t believe plans to tunnel under the forest would come to fruition and that rail authority members shouldn’t even study the alternative because it would delay construction.

The authority is expected to vote on the route sometime this spring.

The high-speed rail’s overall aim is to connect Los Angeles and San Francisco by 2029.