The Usual Bureaucrats: Pushing Hard For The 710 Tunnel

Yes, it really could get a lot worse here. And for reasons that you are not being told.

……..
Mod: My tolerance for this sort of thing is way down lately. Not that it was ever all that elevated, mind you. On Wednesday of this week, in the very 210 Freeway-centric San Gabriel Valley Tribune, three of the lesser leadership lights in this smoggy valley cranked up their noise machine and came up with some remarkably indistinct arguments for going forward with the 710 Tunnel. Something that most people here don't want, and will worsen our quality of life.

They called their guest commentary "Clearing the air on SR 710 North" (link), and it was written by Gary Toebben, Hilary Norton and Cynthia Kurtz. A hat trick of suspect commentators, and all people who have been hustling a living on the local government/bureaucracy circuit for a while now. There are a lot of these kinds of folks floating around the neighborhood while you're off working. So many in fact that they write their opinion pieces three bureaucrats at a time.

I thought I would discuss a couple of the more remarkable nonsense passages from their article, and then share with you what I believe really is hurling the Metro-Caltrans juggernaut towards a tunnel they have been hellbent on building all the while. No matter what the ginned up PR justifications for their so-called "process."

First, when the authors are talking about "The Gap," they are not discussing any local mall clothing store. They are talking about that part of the 710 Freeway where they plan on putting a tunnel connecting the heavily polluted 710 Corridor to the portion of the planet where we live. A place called the San Gabriel Valley. All of the health statistics they cite here will become even more a part of our world as vast volumes of additional diesel truck and auto traffic are funneled onto the 210 Freeway, a thoroughfare that already is a nightmare for those using it to commute back and forth to work.

The Los Angeles County Economic Development Corporation is also amusing, in a pliable nonsense numbers kind of way. Can you name all of the local business nonprofits and government bureaucracies that specialize in predicting the future? In order to justify certain agendas, along with their corporate and taxpayer funding? There are so many. And based on the track record you'd be better off going to a palm reader.

None of this makes much sense of course, especially for those who live in the area covered by the newspaper that published their views. The San Gabriel Valley already comes to a near standstill twice each day. What happens when there is a direct route from the 710, 5 and 10 freeways straight onto the 210 freeway? Chaos, obviously.

That so-called "congestion solution" they have been pushing from the start, this 710 Tunnel, will mean little appreciable difference in the areas they claim to care about, while at the same time making the congestion here far worse than it is already.

And how strange that Cynthia Kurtz, who works for an organization called the San Gabriel Valley Economic Partnership, should be pushing for this. Should the 710 Tunnel ever be built few of those esteemed local leaders of commerce will be able to make it to their frequent SGVEP meetings on time.


So what is the real reason for building this 710 Tunnel? In January of 2013 I wrote a guest op-ed commentary of my own for the San Gabriel Valley Tribune. It was called "Economic Imperialism and the 710 Tunnel" (click here). In my humble opinion these are the real reasons why compliant lifer bureaucrats like the authors of the baloney cited above are scampering about pimping their tunnel. And in ways that have little to do with the what is actually going on. 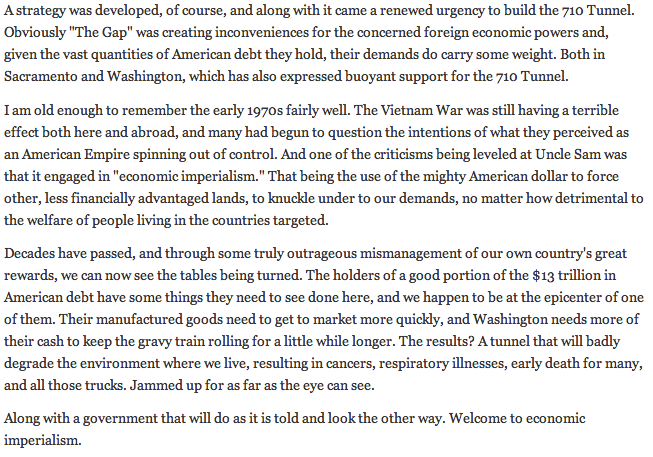 It is kind of sad, and even a little frightening. So many of those we trust to run our local governments, planning organizations and regional transportation agencies such as Metro and Caltrans, have actively involved themselves in promoting the interests of less than friendly overseas economic interests. And at our expense. From getting cheaply produced foreign manufactured products out of the ports and to market more quickly, to enabling McMansions in Arcadia.

Quite obviously our unctuous bureaucratic functionaries have sold us out. Apparently in their eyes the deals are done, plans made, and we the people have become little more than a public relations problem. People not worthy of being told much actual truth, and as such something to be handled with care.

At least until all of the geopolitical global power changes and required infrastructure are in place and running. After that we won't matter.