Completely ignored in the SR-710 Draft EIR report is the possibility of a Tunnel Boring Machine (TBM) mechanical failure like the one that happen in Seattle.

Sometimes failures can be fixed inside the tunnel and sometimes not. Bertha, the 57 foot in diameter by 326 foot long Tunnel Boring Machine (TBM)  from Seattle, could not be fixed in the tunnel, so they dug down to her, creating an access pit from above.  The access pit is 80 feet in diameter by 120 feet deep. The work area on the surface looks to be at least a city block.


Below is a short one minute video of Bertha’s dismantling. It shows how much space around the access pit is needed to handle the huge pieces of the TBM. The workers look very small next to the first huge piece of the TBM.  There are three more pieces that will be brought up.

Below is an informational flyer that addresses the possibility of an equipment failure along the SR-710 toll tunnel route in Pasadena, South Pasadena or El Sereno. Can you imagine the lost of homes and disruption to this area if that were to happen?   The flyer has an image of a gigantic access pit and scaffolding six stories high next to the Huntington Hospital.

Extending the SR-710 freeway by tunneling under west Pasadena got a bright-green light from a 26,625-page draft environmental impact report (DEIR) recently released by Caltrans and LA Metro.

Rivaling the complexity of Boston’s infamous “Big Dig” megaproject, the SR-710 tunnel is being promoted over more environmentally sound alternatives as the solution to commuter traffic congestion on local streets. But with tolls and no on-ramps or off-ramps for its entire length, the underground thoroughfares would largely benefit trucks on long hauls to and from the ports by offering the big rigs an alternative to the I-5 and I-10.

The largest tunnel-boring machines in the world — an unprecedented 60 feet in diameter — would be used to drill two parallel tunnels almost five miles long, crossing six earthquake faults and two aquifers. About 5 million cubic yards of earth would be removed, according to the report. During construction of the tunnels, road closures, detours and thousands of dump trucks would complicate traffic. Nearby property owners can expect reverberations and ground settlement.

Completely ignored in the report is the very real possibility of an underground equipment failure that could devastate entire city blocks.

This happened in Seattle when a mammoth tunnel-boring machine overheated and stopped in December 2013. The stalled equipment could be reached and repaired only by excavating a crater-sized hole that was 80 feet in diameter and 120 feet deep. 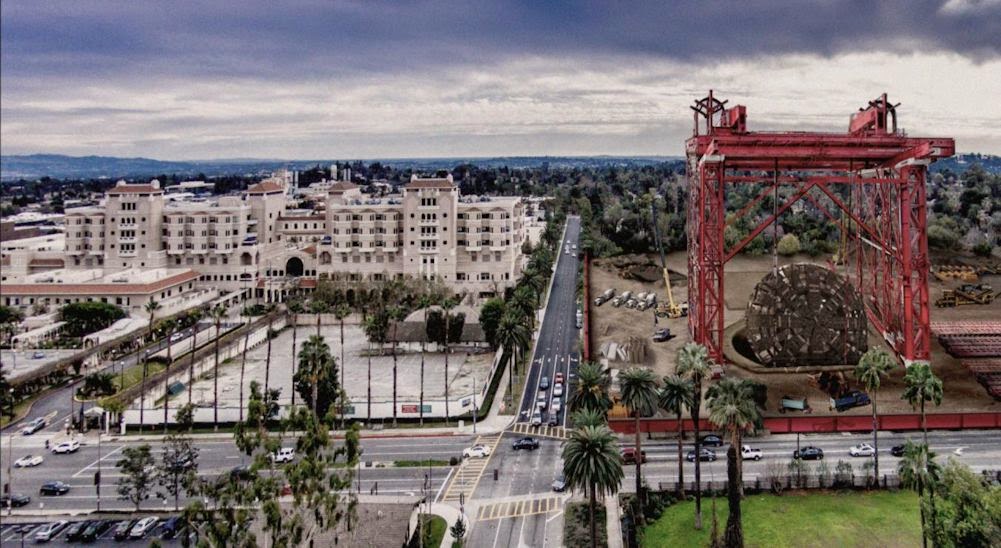 Could it happen here? In this composite image, we’ve superimposed what had to be done in Seattle (to repair that project’s tunnel borer) with what might have to be done in Pasadena near Huntington Hospital (looking south along S. Pasadena Avenue at intersection with W. California Boulevard). In Seattle, a gigantic pit had to be dug to disassemble the equipment and hoist it to the surface in pieces via scaffolding rising six stories above the ground. The construction zone there encompasses numerous city blocks. A similar rescue operation could take place anywhere along the tunnel route in Pasadena, South Pasadena or El Sereno. 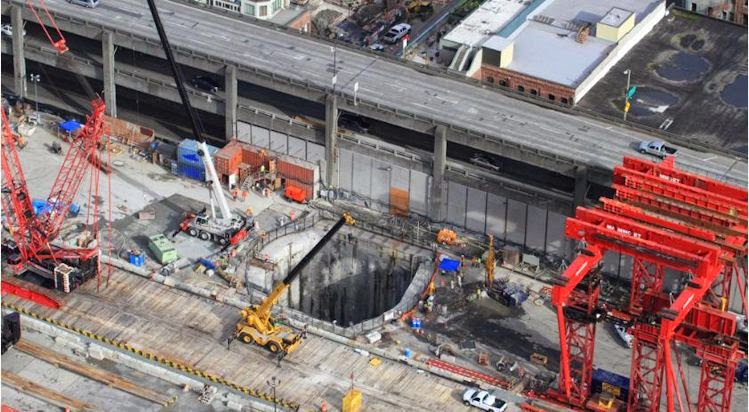 Feb. 13, 2015 – Aerial photo of the 120-foot-deep pit dug to in Seattle to access and repair Big Bertha. Source: Washington State Department of Transportation.

Failures of drilling equipment, flooding and collapses have plagued almost half of the world’s large tunnel projects surveyed by the WPRA. Sometimes fixing the machinery can take place from below. However, when accessed from above, properties in the way must be demolished and cleared for rescue operations.

In downtown Seattle, the rescue and repair of a mammoth tunnel-boring machine — “Big Bertha” — has now become as challenging as the tunnel construction itself. In the above photo, a cavernous hole had to be excavated to reach the 57-foot diameter drill.

A year after Bertha stalled, the machine is still not repaired. The gaping pit is now threated by water rising from below, and buildings nearby are sinking.

Based on historical evidence, it’s very possible that one of the SR-710 tunnel-boring machines – the largest in the world — will break down somewhere along the 5-mile corridor, followed by a similarly disruptive rescue and repair operation. 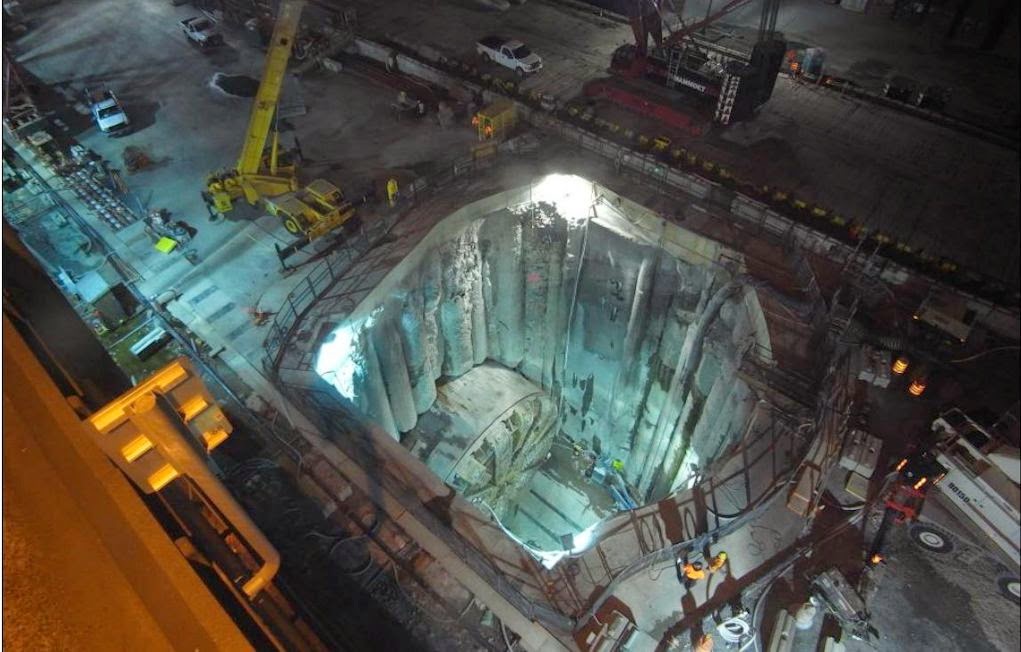 March 1, 2015 – Aerial photo of the front face of Big Bertha poking into the 120-foot pit that was dug to make repairs. The entire front end must be lifted to the surface and rebuilt. Source: Washington State Department of Transportation

West Seattle Blog with pictures and report that 2nd piece has been lifted out: