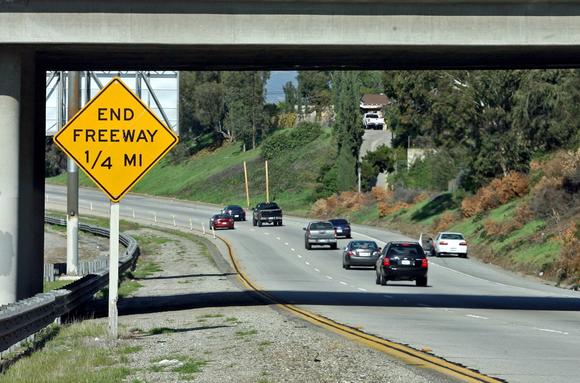 Hosted by the city of La Cañada Flintridge and spearheaded by local activist Jan Soo Hoo, the event was not intended to be a discussion of the merits of the project’s five alternatives — which include a light-rail option as well as a 4.2-mile, dual-bore tunnel — but rather a sort of primer on submitting effective questions and concerns in the massive document’s public comment window.

Civic leaders, including Mayor Pro Tem Don Voss and former Assemblyman Anthony Portantino, peppered an audience of about 50 people who turned out to hear tips provided by Delaine Shane, who’s spent decades preparing environmental documents for the public and private sectors but spoke Saturday as a private citizen.

Portantino encouraged citizens to not be deterred by the bulk of the project’s environmental impact report, expected to be thousands of pages long, and to share their viewpoints on something that will affect communities well beyond the corridor.

Shane provided a history of environmental rules, including the California Environmental Quality Act (CEQA), which guides how the potential impacts of projects are judged. She suggested people who make comments focus on one key aspect of the EIR that interests or pertains to them.

Public comments are a vital part of the EIR process, Shane explained, since citizens likely know their neighborhoods better than the agencies examining the health and environmental risks of a plan.

“You know your communities far better than many of the planners who are writing this document,” she added. “That gives you an edge on them, because if you see something they missed… that’s a big inadequacy.”

Shane offered other tips for writing effective comments, advising participants to set a schedule, research selected issues deeply and visit locations before writing a letter or email that focuses on discrepancies in the document’s facts, lapses in logic or lack of evidence.

Afterward, La Cañada resident Leslie Miller, who teaches AP environmental science at Flintridge Sacred Heart Academy, said she’s been following news on the 710 and planned to comment on the project’s use of energy resources.

This isn’t Miller’s first time drafting an EIR comment — she recently penned one related to FSHA’s master plan — but she said she learned a lot from Shane’s presentation, and hoped to involve her students in the process.

“I’ve talked about this briefly in class before, but now that this is going on, I’ll definitely be using it,” Miller said.

Organizers encouraged all those who planned to write comment letters to include the No on 710 Action Committee and city leaders in their correspondence.

Another workshop might be scheduled to help people focus their comments, once the EIR is released, which Caltrans officials reported would be soon forthcoming.