How Much Money U.S. Transit Systems Lose Per Trip, in 1 Chart

Shocker: dense, compact cities tend to do better than others. 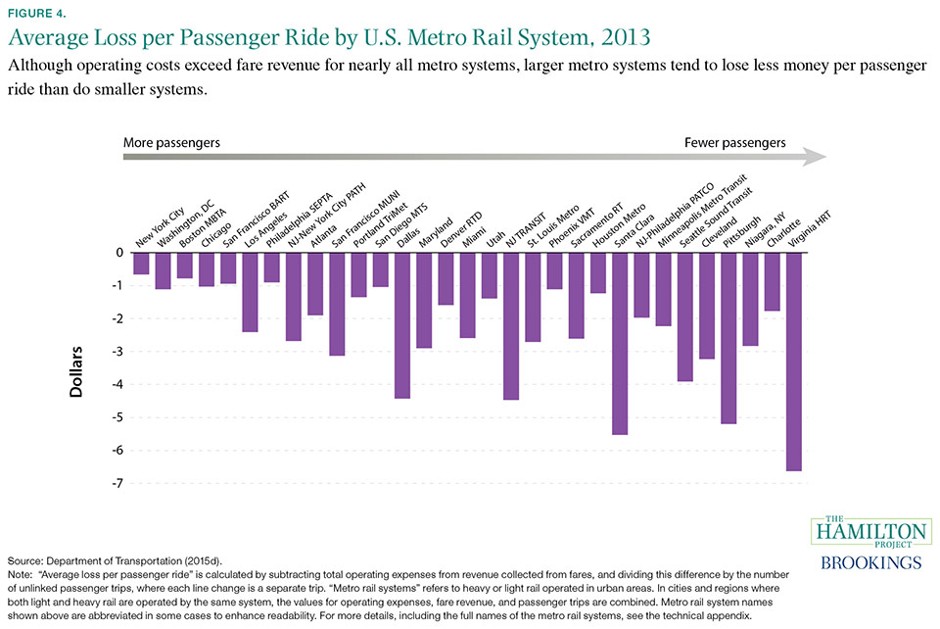 Alison Burke over at Brookings points us to the chart below, via the Hamilton Project, showing how much money major U.S. public transit systems lose per ride. The immediate if unsurprising takeaway is that every single metro rail system loses money. Only a handful of America’s 1,800-plus mass transit operations (metro trains as well as buses and other modes) generated more fare revenue in 2013 than they paid in costs, according to Hamilton.

A number of big rail systems managed to lose just about a buck per trip, or slightly less. These include New York, D.C., Boston, Chicago, San Francisco’s BART, and Philadelphia. On the flipside of the scale are systems like Pittsburgh, Santa Clara, and Hampton Roads (Virginia), where the losses exceeded $5 a pop.

The notable pattern here is that transit does a better job operating near cost in compact cities with dense residential and commercial development. That’s not a totally hard-and-fast rule; Phoenix had a low per-ride loss in 2013, even as San Francisco’s MUNI and New York’s PATH came in at roughly $3 a trip. But generally speaking, as a transit system stretches into remote and far-flung suburbs, it becomes harder to pick up enough fares to cover expenses.

Transit subsidies spark endless debate in cities, with locals often opposed to the idea of spending a great deal of public money to benefit a relatively small share of travelers. That’s a very narrow view of transit’s benefits. On a macro scale, agglomeration—or the ability to pack lots of people into a small place—can be worth billions of dollars in economic growth. At a micro level, even in small urban areas, good transit helps companies attract a strong employee pool.

Beyond those benefits, it’s important to keep in mind that all transportation modes earn a subsidy to some degree. Drivers don’t pay enough in gas taxes to cover the cost of road maintenance and expansion, nor do they pay any fees at all for the massive annual social costs they impose through congestion, pollution, and safety. Squabbling over which mode gets more taxpayer money misses the larger point: both are essential for a high-functioning metro area, and both need help.

It’s also critical to keep in mind that cities fully expect to lose money on public transportation. Every agency faces a trade-off: either cover a wide service area, which often means sending empty buses into remote areas, or focus on ridership and revenue, which means restricting service to high-density corridors near the city center. The subsidy backlash often arises with the flawed belief that you can have things both ways.


Some subsidies make more sense than others

The fact that some transit subsidies are inevitable doesn’t mean they can’t be limited. Transport scholar David Levinson has argued that a better funding model would treat public transit like a utility: fully regulated, but covering its costs. In a thoughtful City Journal piece a few years back, Josh Barro suggested that the whole discussion of transit funding must begin with smarter zoning that calls for taller buildings, mixed-use development, and no parking minimums.

In some places it may also make sense to have higher base fares—especially along commuter rail lines that extend into affluent suburbs. As long as the price of driving also rose to match its full cost, transit ridership wouldn’t suffer, and service would likely improve. Cities could still discount fares for low-income users; as Seattle recently showed, new smart card technology makes it easier to put such equity programs in place.

And when it’s time to expand a transit system into a new area, the real estate developers primed to benefit from the new service should pay much of its cost. That’s how they do things in Hong Kong, and it’s no coincidence the city’s MTR transit system makes an enormous annual profit. U.S. agencies will settle for being in the black first, but it’s always nice to have something to work toward.
Newer Post Older Post Home