Letter: Proposed 710 tunnel is a boondoggle


On June 18, the governing board of the San Gabriel Valley Council of Governments voted to support the tunnel alternative proposed to extend the I-710 north to the I-210 Freeway. The proposed tunnel alternative is one of five options studied in the SR-710 North Draft Environmental Impact Report/Environmental Impact Statement. This decision is disconcerting and irresponsible. The city of La Cañada Flintridge was one of several cities adamantly opposed to this decision.

The SGVCOG governing board voted to support this alternative without considering the true cost and impacts to the taxpayers. The vote of support took place prior to the release of the draft report’s cost-benefit analysis, which was published the day after the vote. As stewards of the taxpayer dollar, the elected officials on the board who voted in favor of this ill-conceived project should have reviewed the economics of this project prior to taking a vote.

Furthermore, the draft report concedes that if the tunnel is built, 90% of motorists would either receive no travel-time savings or their commute would actually worsen. Only a small percentage of travelers would benefit, with an estimate 2.5-minute travel-time savings. Spending $3 billion to $5 billion to save 2.5 minutes of travel time for 10% of commuters is a bad choice.

L.A. County has a backlog of numerous transportation infrastructure projects waiting for funding. Many of these projects could benefit from the billions of dollars that will be wasted on this tunnel boondoggle. Those projects would benefit far more commuters.

Economics aside, if built, the tunnel alternative will increase traffic onto the 210 Freeway, elevating pollution and decreasing air quality for the children playing outdoors at the 20 schools located along the freeway.

The SGVCOG should have never gotten involved in such a contentious matter. The members of its governing board unnecessarily involved themselves in an issue that only serves to divide our region and did so without consideration of the cost-benefit to taxpayers and commuters.

The city of La Cañada Flintridge is a member of the five-city Connected Communities Coalition, representing the shared concerns of the cities of Pasadena, South Pasadena, Glendale, Sierra Madre and La Cañada Flintridge. Together, the coalition supports a much less expensive and less invasive approach to congestion relief that includes street widening coupled with bus and rail improvements. The San Gabriel Valley Tribune Editorial Board recently came out in support of the Connected Committees Coalition, and its “Beyond the 710” proposal (beyondthe710.org). The group continues to garner support for its approach to regional congestion management.

The public comment period for the draft report has been extended from July 6 to Aug. 5. I encourage every resident to submit comments for review and get involved in this important decision-making process. For more information visit the project website: dot.ca.gov/dist07/resources/envdocs/docs/710study/draft_eir-eis/.


SGVCOG Supports the Completion of the 710 Tunnel

Posted by Janice Ochoa 39.60sc on July 01, 2015
on June 18th,  the San Gabriel Valley Council of Government's Governing Board voted in support of closing the 710 gap via tunnel. "The completion of the 710 gap has been a long-standing transportation priority of the SGVCOG". Read more from their letter of support here: 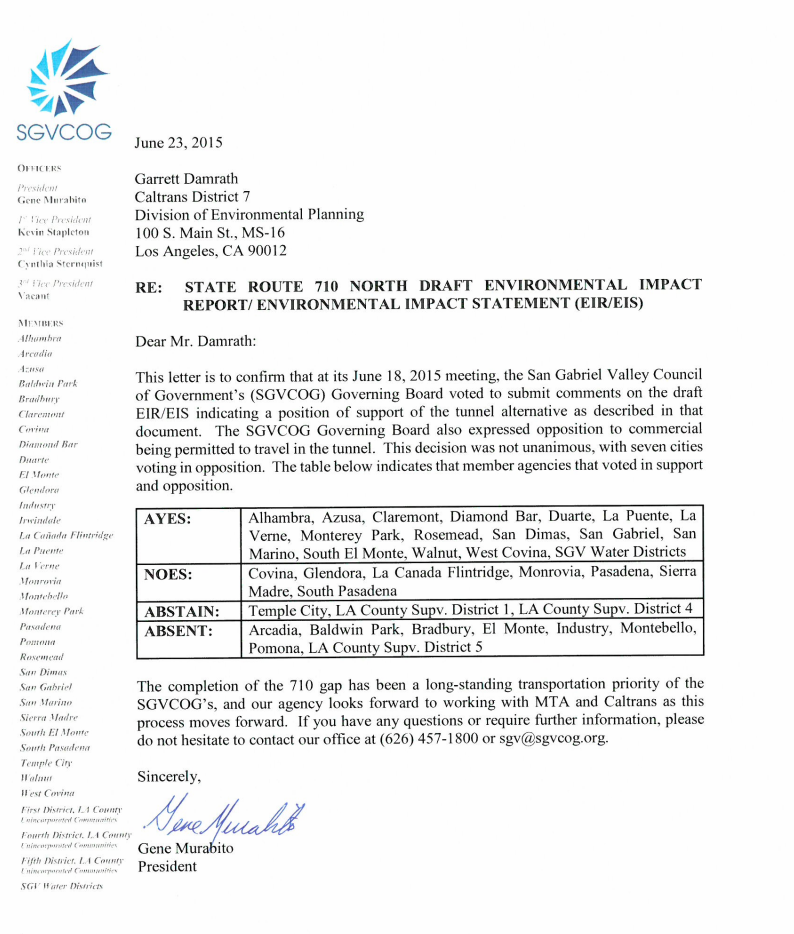