Many options, no single solution to nation's traffic snarls 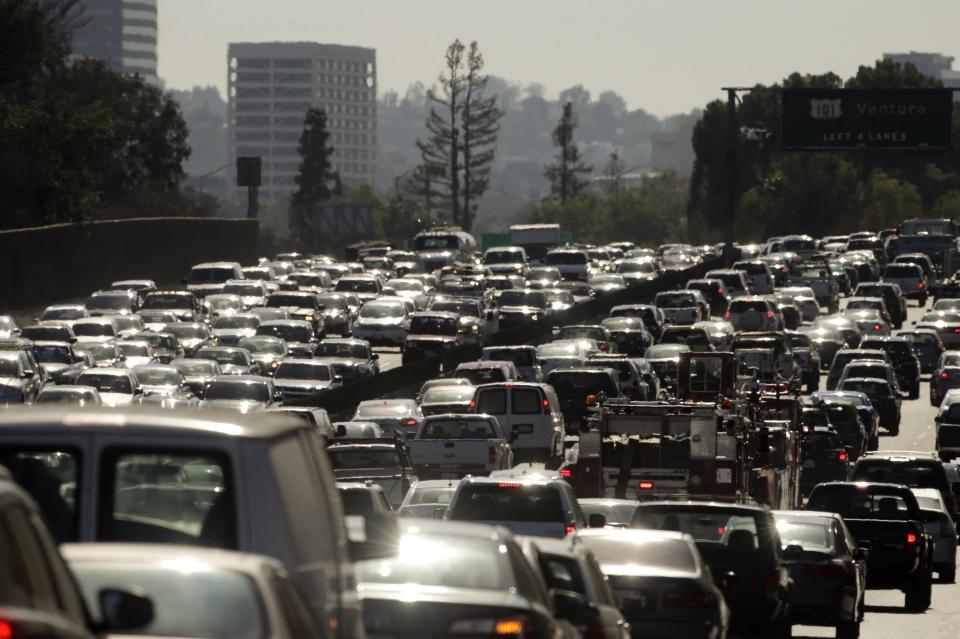 In this Wednesday, May 20, 2015 photo, traffic slowly moves along the 101 Freeway during afternoon rush hour in Los Angeles. Traffic congestion is projected to become significantly worse and more widespread without big changes in how people and products get around. The possible solutions are many, but none is easy or cheap.

The problem is clear: Traffic congestion will become significantly worse and more widespread without big changes in how people and products get around.

Build more roads. Build more public transit. Rely on new technology. The possible solutions are many, but none is easy or cheap.

Ridership on public buses, trains and subways has reached its highest level nationally since the 1950s, and transit boosters cite this as evidence that expanded service and routes is a good investment.

The nation's driving capital, Los Angeles, is making a multibillion-dollar investment in building or extending five rail lines. Transit advocates say that should be a model: If LA can do it, any region can.

Skeptics point out that the record ridership still translates into just a fraction of all trips people take. They also make a bang-for-the-buck argument, saying big-ticket transit projects just don't make enough of a difference to justify their cost.
___
TOLLS ARE 'HOT'

Driving is expected to remain the primary means of travel for most Americans. But finding the money to maintain aging highways, much less build more lanes, is increasingly difficult.

To help fund new construction, the Obama administration has proposed letting states toll federal interstates. That's been prohibited since the interstate system was launched in 1956, except for a few exceptions, including highways that already had tolls. Congress would have to approve the change.

One way to make existing highways more efficient is "high occupancy toll" (or HOT) lanes. The idea often involves converting carpool lanes that may be relatively car free into lanes that solo drivers can pay to use. Carpoolers typically travel for free. Hundreds of miles of toll lanes already are operating in or around Los Angeles, Houston, Atlanta, Salt Lake City, Miami, Washington, D.C., and other cities.

More tolls don't mean more tollbooths. In the future, there may be no option to pay with cash. Transponders in cars will identify vehicles, and the owner's credit card or account will be charged. Drivers already can take Interstate 95 from Maine to Virginia using one transponder so that they never have to stop at a toll booth.
___
DUMB CARS, MEET SMART CARS


New vehicles will increasingly be "smart cars," equipped with wireless technology that lets them share how fast they're going, their direction, whether they're braking and whether an accident just happened ahead. These rolling networks could relay information to specially equipped traffic signals and other "smart infrastructure," which in turn would be connected to traffic-management centers.

General Motors said it will put this "vehicle-to-vehicle" technology in 2017 model-year Cadillacs. Ford, Toyota and other automakers are working on the technology, but it could easily take a decade or more after smart cars hit showrooms before they replace enough older vehicles to realize their full benefits.


Eventually, smart cars and trucks will be able to form tight "platoons" of eight to 25 vehicles, all electronically talking so they can closely follow each other without crashing.

The University of Michigan Transportation Research Institute is setting up a mock city to test the technology in artificially dangerous situations like a truck running a red light. Automakers are already testing the technology on Detroit area highways and streets.
___
SELF-DRIVING CARS

The ultimate smart car won't even need a driver. "Self-driving" vehicles hold the potential to provide new mobility for the aged and the disabled, and reduce the demand for parking because they could be summoned by other users.

In the San Francisco Bay Area, these self-driving cars of the future are an increasingly common sight. Nearly 80 prototypes have permission from the California Department of Motor Vehicles to test their skills on public roads, although a person must sit behind the wheel in case the on-board computers and sensors make a mistake.

Advocates say the cars will be able to drive more closely together, as well as avoid the accidents that can snarl traffic for miles.

While some Silicon Valley companies want to see these cars proliferate in the next few years, traditional automakers are taking an incremental approach by adding features such as automatic braking or lane-keeping on newer models.
___
IN TECHNOLOGY WE TRUST

Traffic smartphone apps such as Waze suggest the most efficient route from A to B, adjusting along the way based on real-time speed and traffic information from other users.
Dozens of transit agencies have apps that offer real-time travel information. Boston's public schools have experimented with an app that tracks how soon the school bus will arrive so parents who don't want their kids to wait in the cold too long can time drop-offs rather than opting for a drive all the way to school.


If package-delivery drones like those proposed by Amazon ever get off the ground, they hold the potential to decrease the number of truck trips on city and suburban streets.
___
Newer Post Older Post Home