Another three months has passed, so it’s time for another LACMTA rail ridership update. As a reminder, bus ridership for the Westside and San Fernando Valley has been broken out into separate posts.

First, the raw data. Highlighted cells represent the top 10 months for that line (since January 2009).

Recent trends have continued, with the Blue and Red/Purple Lines continuing to slip a little, while the Green Line stabilized. The Gold Line and Expo Lines continue to be near, though not at, all-time highs, with the Gold Line just missing a top 10 month in July. Expo Line ridership picked up from April and May, but is still running a little below last year, so the rolling 12-month averages dropped a little.
.
Here’s the rolling 12-month average of weekday ridership:

As noted previously, some of the drop in the Blue and Red/Purple Lines may be due to ongoing construction that has increased late-night headways and shut down portions of the Blue Line at times.
Saturday and Sunday ridership on the Blue Line continued to slide, possibly due to construction. The Green Line declined but not as significantly. Interestingly, Red Line ridership dropped on Saturday, but had three straight top 10 months on Sunday. The Gold and Expo Lines also had three straight top 10 Sunday months, and had strong Saturday ridership as well.

And lastly, here’s the update for the rolling 12-month average of boardings per mile: 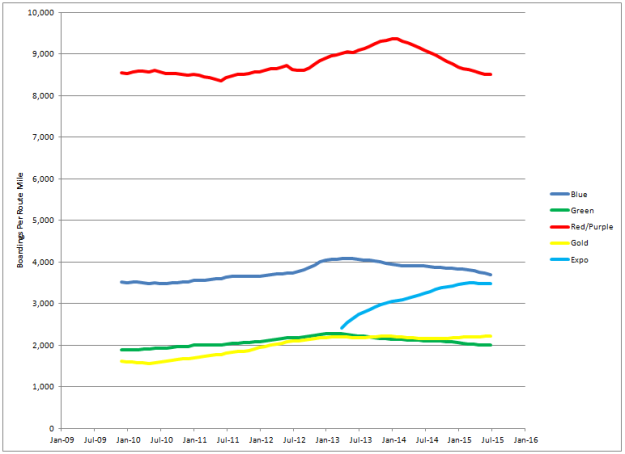 Again, Expo Line ridership is leveling off. The Expo Line is closing in on the Blue Line for boardings per mile, but not for the reasons we’d hope!
Newer Post Older Post Home