Potential project is dropped from funding list should a sales tax measure pass. 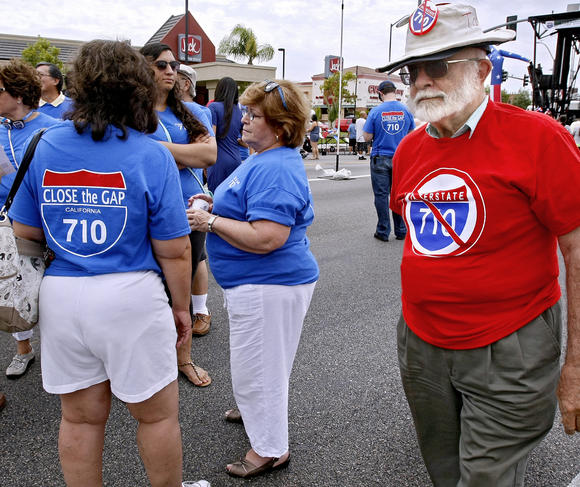 In this file photo from July 2013, a "No on 710 extension" advocate passes supporters of the proposed 710 freeway extension in Alhambra earlier this month. The San Gabriel Valley Council of Governments has removed the 710 Freeway tunnel from a list of projects to receive funding should a transportation tax be passed by L.A. County voters in 2016.

The San Gabriel Valley Council of Governments recently removed the 710 Freeway tunnel from a list of projects first in line for funding should a new transportation sales tax should be passed by L.A. County voters in 2016.

Local officials who support the tunnel view the Aug. 20 decision as a small sacrifice made for the greater good, while tunnel opponents believe it could signify a growing dissent and controversy surrounding the proposed $5.6-billion tunnel project.

The Metropolitan Transportation Authority is working on a ballot measure that would ask Los Angeles County voters to approve a half-cent sales tax in November 2016. This levy would run concurrently with an existing 30-year half-cent hike, Measure R, narrowly passed by voters in 2008.

Metro staff assumes 50% of the revenue generated by the measure’s passage would be used for transit operations and facility repairs. Hoping to garner regional support for R2, Metro is asking L.A.
County COGs to identify how subregions might spend their portion of the remaining half of the revenues.

The San Gabriel COG was asked to prioritize $3.3 billion in transportation capital projects in a mobility matrix that would also help establish subregional goals, according to council documents.

Alhambra COG representative and tunnel advocate Barbara Messina said Monday the pro-tunnel contingent volunteered to remove the 710 project from the list, at the cost of $105 million in potential future tax revenues, to avoid controversy.

“We felt we didn’t want to jeopardize that (Measure R2) election and have the 710 be a part of it,” Messina said, explaining the decision followed a talk with current L.A. Mayor Eric Garcetti. “I knew he felt uncomfortable with the 710 tunnel being on that ballot.”

The decision also followed a July 23 recommendation from the council’s transportation committee that the panel reduce the amount of funding earmarked for highway efficiency projects in favor of transit and active transportation plans.

And, because pro-tunnelers are planning other means of paying the multibillion-dollar price tag, namely public-private partnerships, Messina said it didn’t seem worth it to argue for the 710 tunnel’s inclusion in the matrix.

“We weren’t going to be dependent on that money anyway, so it made sense for us to take it off the matrix of the COG as our priority project,” she added.

But those who oppose the tunnel, including La Cañada, Glendale and Pasadena city officials, for the for the congestion and health risks they believe it will bring, view the removal of the project as an indicator that the tunnel is controversial enough to doom Measure R2 to defeat.

“I think it’s a recognition there are some significant issues and concerns that have not been addressed,” Curtis said Wednesday.

La Cañada Councilwoman Terry Walker, who represents the city on the SGV-COG, said while she wasn’t in attendance for the Aug. 20 meeting, she believes the case against the tunnel in the wake of the draft EIR release seems to be growing.

“Sometimes a small group can have a big voice,” Walker said. “We have a lot of valid facts behind us.”

“It’s so important the public not read this as a sign the tunnel is dead,” Soo Hoo said. “They’re not sacrificing the tunnel at all.”
Newer Post Older Post Home