Should Sierra Madre Join the Move to Dump the SGVCOG? 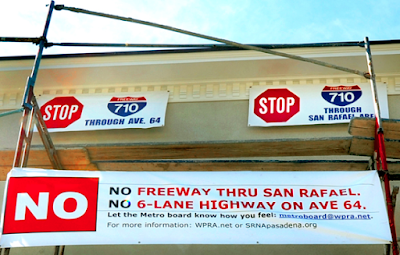 There is an interesting article up on the Pasadena Star News news site today about a move by some area cities to abandon the San Gabriel Valley Council Of Governments and start a "COG" of their very own. An overdue move in the minds of some.

These cities would then create something they're calling the Arroyo Verdugo COG, an organization that would hopefully be far more responsive to the needs of cities located in the western portion of the San Gabriel Valley. The issue driving this breakaway move being the SGVCOG's senseless and, in my opinion, less than aboveboard support for the 710 Tunnel. Something that, if built, would have devastating environmental consequences for any of the cities located along the 210 Freeway. Including those who support building it.

Charges of unscrupulousness, of course, being no stranger to the SGVCOG (link).

Sierra Madre, which ponied up $50,000 in taxpayer dough a while back to join with several other cities in the fight to stop this tunnel (link), has yet to consider making such a move. Which kind of leaves the city in the unfortunate and somewhat schizophrenic position of having both paid money to fight this unhappy project, while at the same time also giving money to support the SGVCOG, an organization that has now made building the 710 Tunnel one of its very top priorities.

Hopefully the Sierra Madre City Council will give this disconnect a long hard look once they return from their long August break.

Here is the first portion of the Star News article: 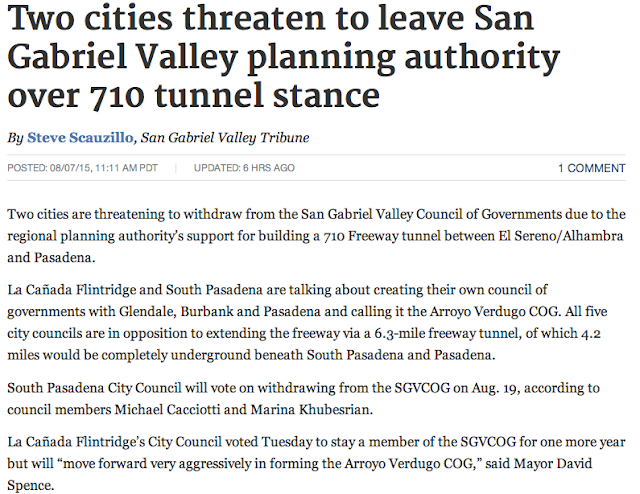 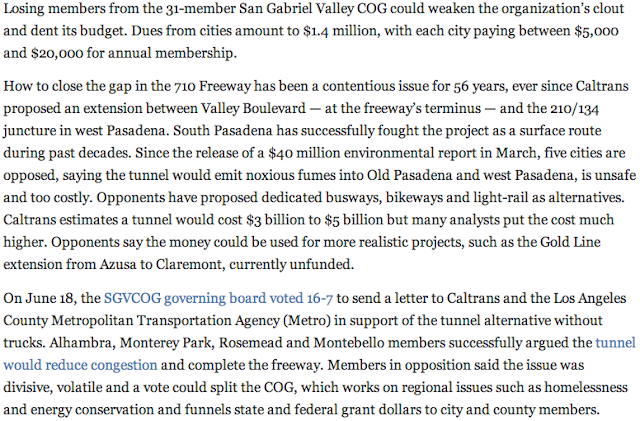 The rest of this article can be found here.