Hamburg's plan to hide its highway underground and cover it with green space will reconnect a divided city. 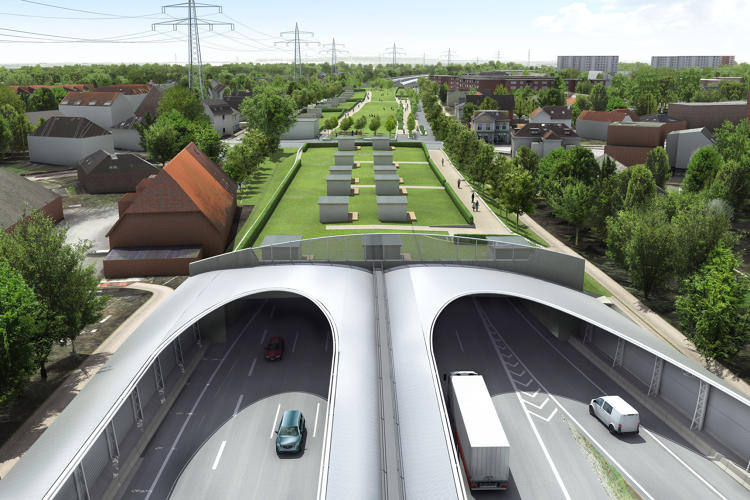 When the A7 highway was first built in Hamburg, Germany, it sliced the city in half.


When the A7 highway was first built in Hamburg, Germany, it sliced the city in half. Now a few divided neighborhoods are starting to be stitched back together, as the city begins construction on three new parks that will fully cover parts of the autobahn.

The highway is the longest in Germany and one of the busiest. As traffic keeps getting worse, the city realized that it had to find a way to keep the noise in the area low enough to meet national laws for noise pollution. Since simple walls wouldn't be enough, they decided to turn sections of the road into covered tunnels. The design can reduce noise in surrounding neighborhoods to almost nothing.

Each new cover will stretch over a small length of highway and create a new park, with open meadows, woods, bike paths, community gardens, and tree-lined squares. In total, the roofs will cover over two miles and create over 60 acres of new green space.

"Imagine that there now is a big, loud gap in the city, about 70 to 100 meters wide, with cars, dirt, noise, day in day out, 24/7/365," says Reinhard Schier from Hamburg's Ministry of Urban Development and Environment. "After that building is finished there will be parks, gardens, quietness, bird songs, fresh air. And the parts of the city in the west and the east of the autobahn will be reunited again."

The project will also mean that the city has room for a quickly growing population, since people will suddenly be willing to live next to the highway, according to Schier. "We can build more than 2000 new homes," he says.

As the government builds the covers, it will also widen the highway to try to ease traffic. Some of the new parks will stretch over eight lanes, making the tunnels the largest of their kind in Europe.

Of course, the project raises another question: Is it better to turn a highway into a tunnel or get rid of it completely? As other cities start to repair neighborhoods torn apart by urban highways, some are taking those highways out and building better public transportation.

Citizens of Hamburg aren't likely to stop driving anytime soon. Still, the new parks will make it easier to choose to walk or bike across town—and will eventually link up with the city's "green network," a plan to cover as much as 40% of the urban area in parks connected by trails.

Construction is beginning this year on the first two autobahn covers, and the project will be completed in 2022.