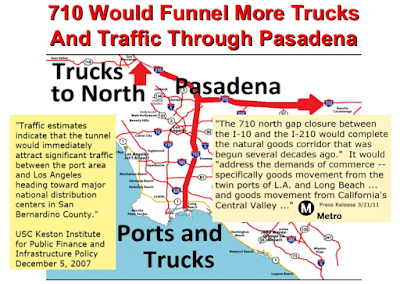 (Mod: This article comes to us via the amazing Sylvia Plummer and her No 710 Action Committee. It confirms what we have been saying at The Tattler for a long time. The building of the 710 Tunnel presents an immense increased cancer risk for the San Gabriel Valley. News that has apparently been actively suppressed by CalTrans and Metro, probably because your health needs are an inconvenience to the concerns of the overseas government and financial interests they really care about. Yet another example of dishonest taxpayer supported regional planning and transportation agencies working against the interests of the very people whose money sustains them. In this instance with some serious, possibly even deadly, consequences.)

"Caltrans and Metro employees get CALpers. Nice way of showing their gratitude. Cancer for platinum pensions. Do they get bonus points for killing kids?" - a reader

SCAQMD: 710 Freeway Tunnel would raise cancer risk to unacceptable levels - Many comment letters from municipalities, organizations and public agencies have also been coming in to the No 710 Action Committee. One in particular has received much attention, and it's from the South Coast Air Quality Management District (SCAQMD).

The SCAQMD letter was the subject of an article by Steve Scauzillo in The Pasadena Star News and San Gabriel Valley Tribune. 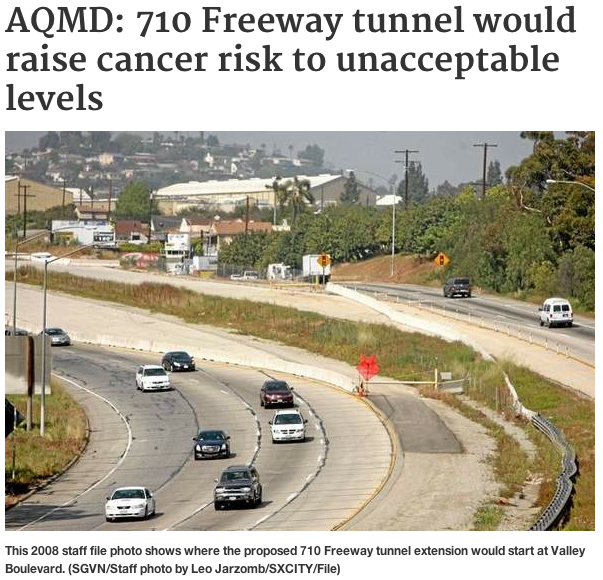 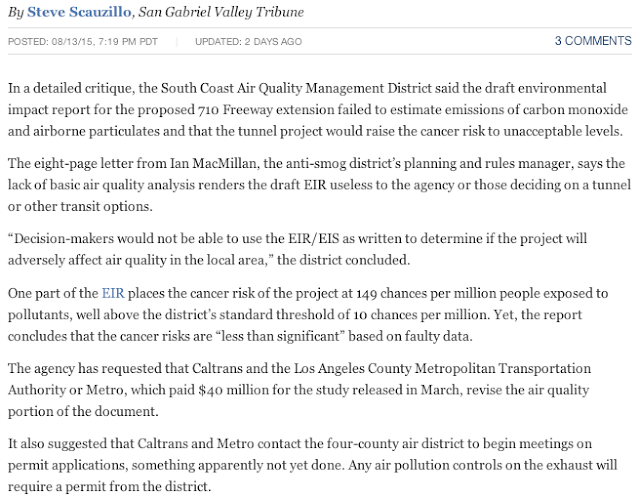 (Mod: $40 million dollars spent and they left a considerable amount of the cancer risk assessment out of the EIR. Especially the part about the increased cancer threat to children. Incredible to think that we actually pay these guys. For the rest of this PSN/SGVT article click here.)

The issues raised by SCAQMD are critical to all of us. The cancer risk is actually greater than presented in Scauzillo’s article. The DEIR/EIS used outdated methodology to calculate cancer risk. The South Coast Air Quality Management District's research found that the cancer risk, especially to children, was being UNDERESTIMATED by 200% - 300%, and recommended changes in the methodology for determining risk.

The Office of Environmental Health Hazard Assessment (OEHHA) adopted the recommendations. The new methods take into account the physiological differences between children and adults. Overall, the cancer risk is 2.5 times higher than reported in the DEIR/EIS. Particularly disturbing is that Metro, Caltrans and their consultant, CH2MHill, were notified at a public meeting by a member of the SCAQMD Board of Directors of the new findings and change in methodology a year before the study was released. He emphasized the need for them to use the new methods. In their infinite wisdom, they chose to ignore him.

You can listen to the 25 minute broadcast by clicking here.

Also covered on NBC News: 710 Freeway Tunnel Health Concerns - "A new study shows building a tunnel along the 710 Freeway could be hazardous to your health. The report from the South Coast Air Quality Management District shows a negative environmental impact for the proposed project."

(Mod: More proof that bad government isn't just a threat to your financial well-being, it can also kill you.)