I journeyed to Azusa for the first time yesterday. Why, you may ask? It was not to cheer on the Azusa Pacific volleyball team or to take a hike up to Mt. Baldy but to experience the "Foothill extension" of the Gold Line, which opened for service yesterday.

I had a lot of fun. I not only got to see new towns and landscapes (including stunning views of the San Gabriel mountains) but sample excellent beer at the various pubs placed conveniently along the route.

With that said, small but pertinent operational flaws checkered my experience (and my optimism for the line's success).

For one thing, getting to the Gold Line by public transit was not easy because bus service on arterials headed to Downtown was rather infrequent (due to scheduling) and prone to traffic delays. Though I am a fan of expanding Metro's rail coverage, I believe that such expansion must be coupled with initiatives to improve the utility of its buses, which carry three times the ridership of Metro's trains.

The litter arrayed around the seats on the Red Line (which I took for the second leg of my pre-ride journey) and the odious smells that permeated the train proved to be another blot on my experience. As I discussed in one of my recent posts (and frequently brought up by public commentors on articles like this), Metro could boost transit use and ridership significantly simply by increasing maintenance (and heightening onboard security) on vehicles. 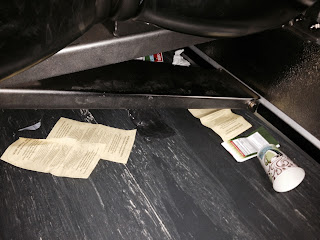 Then when I first boarded the Gold Line at Union Station, I was surprised (and a bit worried) to see Sierra Madre Villa listed as the destination on the train's front monitor, as well as on the maps posted in the interior. Even the programmed announcer which blared upon departure from each station still parrotted Sierra Madre Villa as the "final destination". Only when the train passed Sierra Madre Villa without making a "final stop" announcment (or dispensing of all its passengers) did I know for certain that this was not a "Short Line" service.

Most disappointing of all, the neighborhoods the stations served displayed little semblance of the transit-oriented, walkable "third Los Angeles" Metro is supposed to work towards. The Duarte station was surrounded by suburban office parks. Monrovia station tempted with a grass-covered commons in the immediate vicinity (called "Station Park") but this gave way, as I moved away from the station along Myrtle Avenue, to a desolate strand of auto body shops, office park complexes and gas stations, encasing a sea of single-family homes: the Monrovia "Old Town", which wayfinding signs pointed to as if right at the station's doorstop, lay a good mile-long walk away, uphill (and under a freeway overpass). Irwindale station, as expected, amounted to little more than an island in an industrial wasteland. On the other hand, the Arcadia station is snug in the heart of a commercial strip that appeared nonetheless (on both approach and departure), depressingly car-centric.

Only the Azusa station opened out immediately onto a commercial and retail corridor along Azusa avenue, though this "downtown" was none-too impressive. There seemed to be as many vape shops as eateries (I counted only five restaurants and bars in three blocks). The early 20th-century Spanish Colonial-style> buildings charmed but none integrated a residential use into the district (whether exclusively or as a mixed-use project). Copious parking suggested that most people drove here.

I shouldn't have been too surprised. Eric Brightwell's 2013 exploration of the line's course noted Arcadia's dearth of sidewalks and the Monrovia and Duarte stations' distance from those cities' pedestrian cores.

But I had hope that Metro learned in its 20-odd years of constructing rail lines from debacles such as the Green Line and that its planners had some awareness of the common (transport planning) knowledge that mass transit requires residential density and walkable urban design to be profitable.

With a subway along the region's densest commercial corridor not slated for completion until mid-century and the Sepulveda Pass rail project not even on the table of Metro's 25-year plan, one can only assume that Metro cares little about workable transit.
Newer Post Older Post Home