The Metro Politics of Measure R2 and the 710 Tunnel 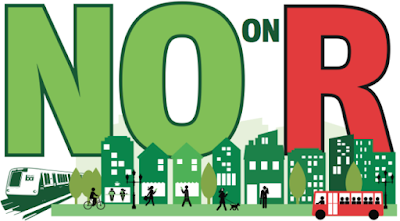 Mod: Quite a glorious train-wreck of controversial issues in this Pasadena Star News story. Metro, which desperately wants a half-a-penny sales tax increase to fund various transportation projects, has gone quiet on the issue of the 710 Tunnel. Most likely because they do not want to upset San Gabriel Valley residents by reminding them that they are the lead agency responsible for this unpopular project. Measure R2 will require a two-thirds majority to pass, and it was the SGV vote that killed the previous version. Of course, the best thing you can do is vote NO in Measure R2 because, and despite all denials, they will spend a big chunk of that money on the 710 Tunnel. A project that would obviously have devastating environmental and economic consequences here.

Pasadena Mayor Pursues Repeal of 2001 Measure Supporting 710 Extension (link): Hoping to bolster opposition to the 710 Freeway tunnel project, Mayor Terry Tornek is proposing a November ballot measure that would ask voters to repeal a 2001 vote supporting the completion of the freeway through the city.

Although the City Council voted in April 2015 to oppose the 710 Freeway’s completion as a tunnel project, Tornek said during a City Council meeting Monday that Measure A legally prevents the city from fighting the project.

The city attorney and outside counsel agreed in legal opinions provided to the city.

“The measure that voters approved would not allow the City of Pasadena to take affirmative steps opposing the completion of the 710 extension,” said City Attorney Michele Bagneris.

Tornek intends to ask the council to vote on a repeal on June 13. The council needs to finalize the measure’s language before a July deadline to make it on November’s ballot. By repealing the 2001 ordinance, Pasadena can fight against the project without restriction, Tornek said.

“As soon as we launch an effort, all it will take is one citizen to sue us and enjoin us from violating the provisions of Measure A, which can only be overturned by a vote of the people,” Tornek said.

“Metro and the various transportation authorities are very anxious not to do anything that would rock the boat and jeopardize the adoption of Measure R,” he said.

After the vote in November, Tornek expects the tunnel proposal to come out of hibernation.

“The city is going to get ambushed and we’re going to be confronted with a full court press to build that project,” Tornek said Monday. “We have got to be prepared to make a concentrated effort to prevent that from happening.”